Here’s a toast to new beginnings. These happen over and over in the game business, where something captures the hearts of gamers and leads them down a new path of fun. That’s what I saw a lot of this week at the SEA VR event, a celebration of virtual reality technology in Seattle.

The event was created by startup Envelop VR, Paul Allen’s Vulcan Ventures, and the Allen-funded Living Computer Museum. The SEA VR event had 19 exhibitors, with more than a dozen of them local to Seattle. They were all inspired by Oculus VR, the maker of the Oculus Rift VR goggles and a startup that was acquired by Facebook for $2 billion earlier this year. That deal has made a lot of VR skeptics seasick from the hype associated with virtual reality. But the organizers of the event believe that virtual reality is the next big thing.

“I want Seattle to become the hotbed in virtual reality,” said Bob Berry, head of Envelop VR, in an interview with GamesBeat. “I want it to lead the way in VR software development and content. Seattle is a perfect place to do this because we have so many video game companies here. The best VR developers in the world will come from the video game industry.”

But Berry’s own Envelop VR is focused on creating virtual reality software that goes beyond games. Virtual reality will likely have applications in e-commerce, medicine, manufacturing, and many other sectors, Berry said. Even Nordstrom, the Seattle-based department store chain, showed a VR demo from its Nordstrom Innovation Lab that was like an architectural walk-through that could help store designers visualize the design of a building — before they go to the trouble of building it.

While Oculus VR is based in Irvine, Calif., and many other startups are in Silicon Valley, Berry noted that the recent revival in VR was jumpstarted in the Seattle area at Valve, the Bellevue, Wash.-based maker of the Steam digital distribution service and games like Half-Life. For Berry, the latest VR craze isn’t just a fad. It’s a continuation of a long-held passion. He went to Japan to study virtual reality for his doctorate in 1998. 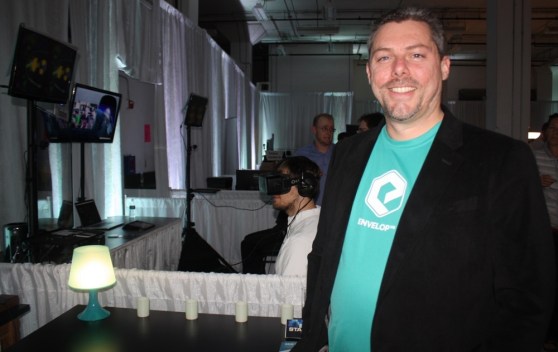 Above: Bob Berry of Envelop VR and organizer of SEA VR

“VR has been a technology that has been ten years away for 40 years,” Berry said. “What I believe now is that it is finally here. It was Valve’s demo that convinced me. It was the first time ever I truly felt presence, where your brain is being tricked into thinking it is something else.”

Uber Entertainment, the game company that Berry also runs, showed off a game demo that used the Samsung Gear VR device, which uses a smartphone screen with the Oculus VR goggles.

Some of the coolest demos came from Atomic VR, Epic Games (based in Raleigh, N.C.), and ZeroTransform.

Atomic VR showed a demo that combined the Oculus Rift, handheld Sony Move controllers, and 16 optical-detection cameras. With that $25,000 system, Atomic VR was able to stage a very cool demo of a lightsaber duel. Mike Lenzi of Atomic VR said the demo took about five months to create. Ben Teitler got it started and Lindsay helped make it more immersive by adding 3D audio technology to the demo.

Epic Games showed off a slow-motion demo dubbed Carflip. It was a high-end animated scene that showed off a robot mech fighting with soldiers in an urban environment. It didn’t make me sick because everything moved in slow motion, and it was cool because you could look around the scene as objects were whizzing past you.

And ZeroTransform, a startup founded by Justin Moravetz, showed off a cool, colorful VR game dubbed Vanguard V. It combines space flight, adventure, and virtual reality. You have to dodge asteroids in low-orbit and zap enemy spaceships. You do so by moving your head in one direction or another, rather than using a handheld controller. If you want to fire a weapon at a spaceship, you simply point your head in the direction of the enemy. It was built so far with just seven people, Moravetz said.

Of course, it is still a little too easy to make bad VR. A couple of the demos at SEA VR made me seasick. I had to grab a glass of water before I continued my tour.

Seattle will clearly be a player in virtual reality. But it’s not going to be easy hanging on to or attracting the VR talent. Guy Bendov, the CEO of motion-control game maker Side-kick Games in Israel, recently relocated to Irvine so that he could be closer to the Oculus VR crew. And Jeri Ellsworth, cofounder of Technical Illusions, the maker of the  CastAR augmented reality system, said her team is relocating from Woodinville, Wash., to a new headquarters in Mountain View, Calif., because it needed better access to talent.

Technical Illusions is engineering its own rival hardware system, which allows you to see 3D images on top of certain metallic surfaces at the same time you can still see real life. It is more like an augmented reality system, in that sense, than an alternative virtual reality. Ellsworth said that because her company is making hardware, it needed access to more software and hardware developers in Silicon Valley, which has a broader base of tech companies to pull from. Silicon Valley is also a place where you can get the attention of venture capitalists and giant companies like Google, which practically owns all of the real estate in Technical Illusions’ new hometown of Mountain View.

“I’m excited to get down to Mountain View and be in the middle of nerdvana,” Ellsworth said. “It’s difficult in Seattle. There’s a lot of software, but not much hardware.”

I don’t know if Seattle is going to dominate VR, or if Silicon Valley or Los Angeles will take that title. But it’s going to be a player. That much is already clear.

On a sad note, goodbye Shoe:

Lastly, I’d like to thank my boss and colleague of the last two-and-a-half years, Dan “Shoe” Hsu, who is leaving his post as editor-in-chief of GamesBeat today. Shoe really helped us grow as an organization and was a Pied Piper who brought a lot of writing and editing talent to our young organization. Shoe helped put GamesBeat on the map. He did so much that we’ll probably replace him with a couple of people. Shoe also taught a lot to me and Jason Wilson, his deputy and our current managing editor. GamesBeat is a stronger organization than it was when he joined it. And if you look around the ultra-competitive media business now, you’ll see that is no small accomplishment. We plan to carry on that work.

He was fun to be around and always polite, even when he was telling somebody something they didn’t want to hear. His diplomatic and friendly style won him lots of friends in the game industry. And he inspired a lot of young people to go into game journalism through Bitmob, which VentureBeat acquired when it hired Shoe, and in its current format, GamesBeat Unfiltered. It is the place where an aspiring writer can get a foot in the door. He isn’t going far, but he’s leaving game journalism. And that’s our loss. Good luck to Shoe. Here’s to new beginnings.