Video games are a great form of escapism. And the game industry celebrated them last night at the DICE Awards, the equivalent of the Oscars of gaming, and the DICE Summit 2017 conference this week in Las Vegas.

Amid the celebratory fun, I noticed something was missing. The show normally confronts issues head on, particularly when it affects the lives of game developers. But nobody mentioned Donald Trump and his controversial travel ban against visitors from seven Muslim countries. At the awards show, none of the winners said anything political, even though there were winners on stage from all over the world. By contrast, consider Meryl Streep’s speech at the Golden Globes.

The game awards show might have been the perfect opportunity to orchestrate a high-profile statement. Pete Hines, an executive at Bethesda Game Studios, referenced the “tumultuous time” that we are living in during a moment when he was giving a Hall of Fame award to his longtime colleague Todd Howard. But he said no more than that. The emcees didn’t even make a joke about Trump. The conference also had no moments where the topic came up. 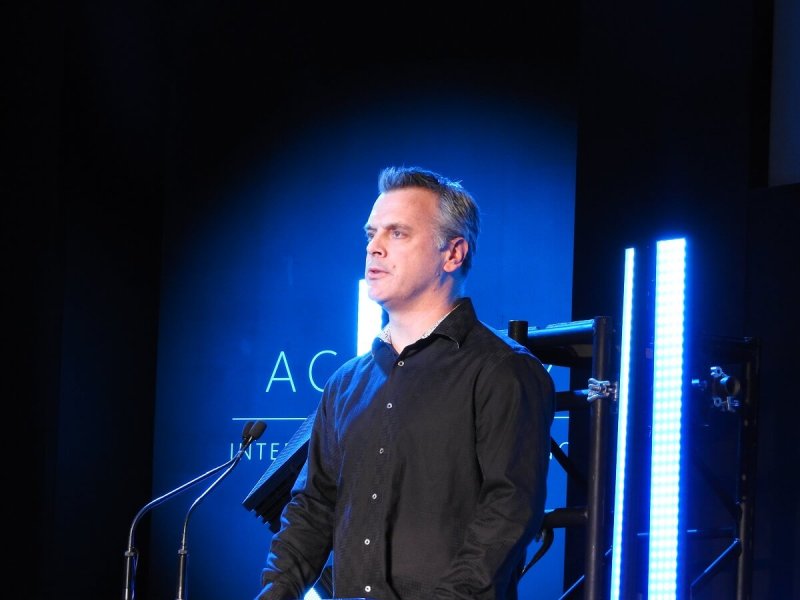 Above: Pete Hines of Bethesda at the DICE Awards.

You could very much argue that politics has no place at an event that celebrates the craft of gaming. Indeed, for some people, bringing up Trump might have been a perfect way to ruin the event, which is a kind of a haven from the outside world. But you could also say that game developers are human, and, judging by the protests that they lodged after Trump first announced the ban, they cared a lot about the ban. I talked about this with a few people at the event.

Mike Fischer, president of the Academy of Interactive Arts & Sciences, said he came into the event programming late and that it wasn’t on the agenda, and nobody brought up talking about it at the conference. He also said that the academy does not coach what the winners should talk about when they go up on stage. Yet he wondered too why no one brought it up. As a policy, Fischer felt that companies could speak up on the issue as they wished, but the academy would not speak for them.

Mike Morhaime, president of Blizzard Entertainment, wrote a moving letter about what was wrong about the Muslim travel ban. He was at the DICE event, and I asked him after the awards why Trump didn’t come up. He also wondered if it was appropriate to bring politics into such an event. He praised Streep’s speech, but also said that it’s a delicate thing. If you don’t say the right words, you might merely be dismissed as “politicizing” something that wasn’t political to start with. He also said that people are hearing about Trump every day in the news, and sometimes you need relief from that.

On the other hand, Morhaime noted game developers can make meaningful statements because interactive entertainment is such a powerful art form. He doesn’t believe as much in the effectiveness of general protests, but rather believes targeted actions, like protesting details such as bans on people carrying green cards — which affects many people at Blizzard — are more effective. 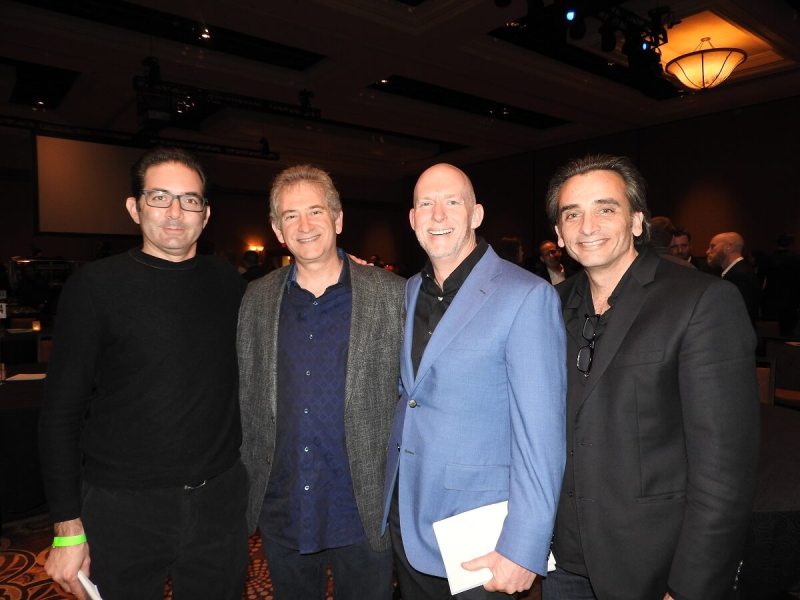 Opportunities arose to talk about Trump and the travel ban, and no one took them. Bill Rosemann of Marvel went up on stage to give both a very interesting talk and to present an award. He did not mention the ban. But he had a very interesting story that said a lot about the impact of art on real life. He said a woman told him a story about her son. The son had finished the Boston Marathon, and he heard a bomb go off. Instead of running away from the bomb noise, he ran to it. The mother said he was a big Captain America fan, and she wondered if he ran to it because of his admiration for the superhero and the thought, “What would Captain America do in this situation?” In my view, that was a beautiful story and an opportunity to say something more.

Some of the nominees might have talked about the issue. Jeff Kaplan, game director on Overwatch, accepted multiple awards, including one for Game of the Year. He thanked the team and the academy but said nothing political. Kaplan also gave a talk about Overwatch where he noted how diversity was a direct result of the push to make the game accessible, but he didn’t mention Trump’s immigration policies.

Ted Price, CEO of Insomniac Games, previously created a moving video protesting Trump’s travel ban. He also spoke in a fireside chat at DICE Summit, but the topic of the travel ban didn’t come up.

Howard gave a wonderful speech about what it’s like to be in the front seat of an industry that gives joy to so many people. Sometimes the industry is not loud enough. Mike Gallagher, president of the Entertainment Software Association, wrote a letter about the state of the industry, and in the middle of the document, he said the travel ban was “reckless.” But that statement was all that the association has said about the issue. 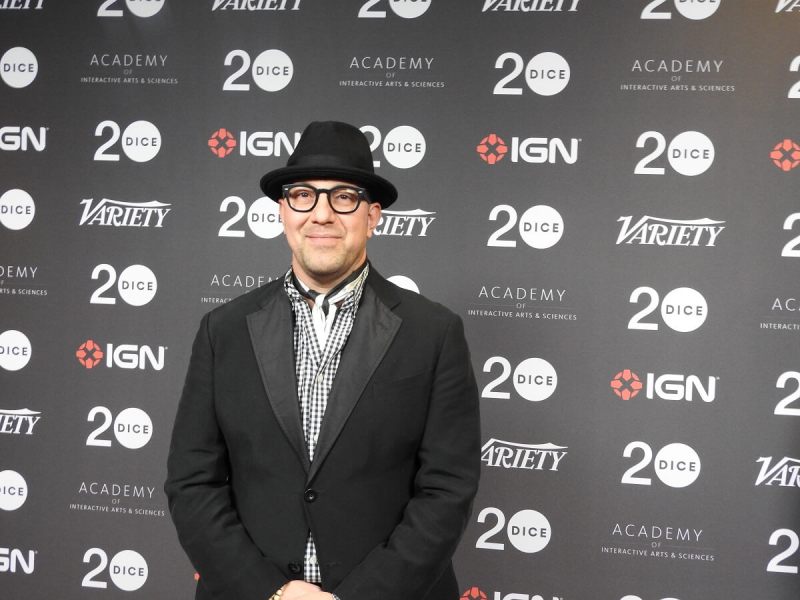 One of the nominees was Navid Khonsari, game director of 1979 Revolution: Black Friday. In the red carpet line, he told me that his game was banned in Iran, and he has been identified as an espionage suspect and cannot return to that country. Khonsari, a former Rockstar Games developer, said he felt gaming is one of the most powerful media, and it allows you to step into the shoes of another person. Sadly, he didn’t win and didn’t go on stage to give an acceptance speech.

On the red carpet, I jokingly asked someone else if they were here to make a political statement. The reply? “I don’t think so. I think we’re here to celebrate games.”

If it were up to me, I would have favored speaking up about it. Last Sunday, on the 75th anniversary of the Executive Order 9066, where President Franklin Roosevelt authorized the internment of Japanese Americans during World War II, I spoke up and wrote about its impact on my family, and how sad it was to see Trump going down the same unconstitutional road again with Muslims today.

Kate Edwards, executive director of the International Game Developers Association, also told me she favors speaking up about issues directly. Edwards said she liked my story about my family. Fischer and Morhaime said it as well. So did Amir Rao, a founder and game developer at Supergiant Games, and Jamil Moledina of Google. They praised how I told my family’s story and also related it back to Trump’s policies of the present day. I felt good about that, and each time someone mentioned it, it brought tears to my eyes.

I mentioned to Morhaime that it warmed my heart that people responded this way. I thought that nobody would care about it, since it was such a small slice of history that I wrote about. But Morhaime said that how a society treats its minority groups tells you so much about that society. I felt that, with the story that I wrote, it was proof that you could say something educational and meaningful and relate it back to the politics of today. That seemed natural to me.

The celebratory awards weren’t the kind of place where you brought this kind of topic up. But neither was the RSA Security conference last week in San Francisco. Yet multiple people brought up Trump, the travel ban, and the political consequences of cyber security problems at that conference.

I would like to see the game developers do more. I don’t want to criticize the organizers of the DICE event in any way nor the winners of the awards. They pulled off a wonderful event that was full of joy and love for the craft of building games. I enjoyed every moment of it, and I have admiration for the craft and the academy that celebrates it.

Indeed, I feel some of this neglect is my fault, in that I didn’t really ask anyone about this until the very end of the conference at a party. But I am asking the question now. And at the same time, I see part of the answer. Indeed, why should anyone bring up something unpleasant at a celebratory moment when all attention is focused elsewhere? You could have asked Streep the same thing, yet she said something that was so memorable. During the #GamerGate controversy, I felt game developers were too quiet.

I hear things are coming, including a game that will make a kind of political statement. I sense that the industry will be inspired to take action and tell moving stories through games, but it will take longer to cook those inspirations into fully baked video game experiences.

Perhaps the topic will come up in a bigger way at the Game Developers Conference, the 27,000-person trade event coming next week in San Francisco. That event also features the Game Developers Choice Awards. I hope so. I believe this because, as you might say from Spider-Man’s point of view, “with great power comes great responsibility.” What game developers create has the ability to make an impact in the real world, and the real world is full of political problems that we must address. What they say when they have the attention of the world also matters. We have our own event coming, and I’m confident the Trump topic will come up at that event as well.