I’ve returned from the biggest battleground of tech, the Consumer Electronics Show in Las Vegas.

My Intel Basis Peak smartwatch told me that, over four days at CES, I walked 73,376 steps, or 18,344 steps per day. Those steps felt heavier this year because I carried a shoulder bag instead of using a roller bag, per the new security rules at the event. On the plus side, I managed to come back without the nerd flu and without a blister like last year.

I did my best, but that means I still only covered a very small percentage of the 3,000-plus companies spread across 2.4 million square feet of exhibit space at CES. My eyes began to glaze over as I saw the enormous numbers of drones, augmented reality glasses, virtual reality headsets, robots, smart cars, fitness wearables, 3D printers, and smart appliance that were part of the Internet of Things (making everyday objects smart and connected). I have published 63 stories about CES products and events. (I should say, I’ll continue to publish stories from CES over the next couple of weeks). I think this was my 20th CES, though I have lost count.

Inside the bubble of CES, which was attended by an estimated 150,000 people, I didn’t even know the stock market was melting down. CES is the place to look if we want to find the things that are going to save us from economic gloom, although we may have to really look. The global technology industry is expected to generate $950 billion in 2016, down 2 percent from a year ago, with the decline due in no small part to weakness in China. This year, I didn’t see much that was going to save the world economy and overcome the skepticism of natural-born cynics. You could certainly find partisans who will say that virtual reality or the Internet of Things will do that, as both movements have spread well beyond just one or two companies. But it’s a reach to say that these categories have already given us their killer apps.

Sill, I had a lot of fun finding things that I liked, and there was no shortage of these. Without further ado, here’s my favorite technology from CES 2016:

The idea of a transparent display isn’t that new. Big tech companies have been targeting them at retailers for a while. But this week Panasonic showed off a 55-inch television for the living room. The display is embedded in a bookcase, where it can transparently show a kind of trophy case behind the glass. But then it turns to black and shows home portraits. The image swivels to reveal a personalized screen with a weather report or a screen displaying a liquid-like aquarium. And it can even show a television show. The display has micro light-emitting diodes. While the screen is limited, as it isn’t completely transparent, it can display at a resolution of 1080p. This was a glimpse of the future, much like Panasonic’s Magic Mirror from a year ago. And I thought it was a wonderful example of how to make technology blend into the environment of the home. 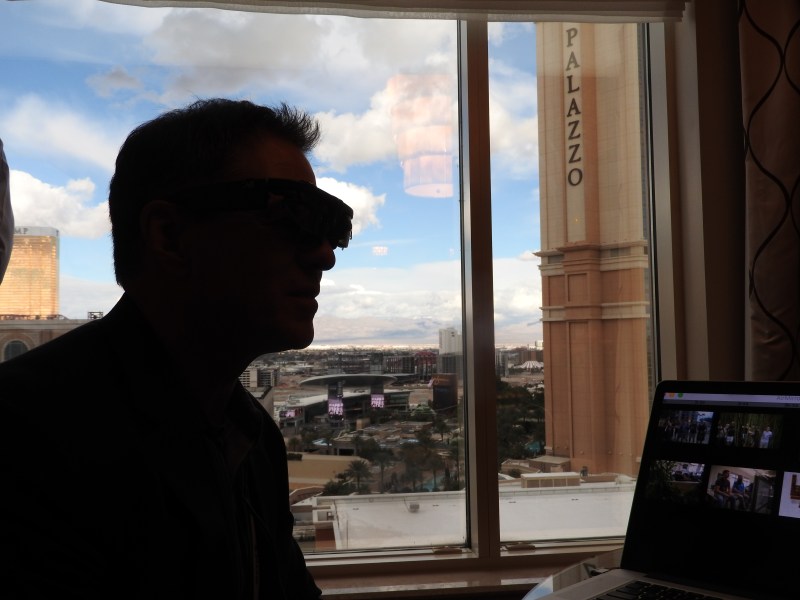 Eyefluence was the shortest demo I did at CES, but it was enough to show me the future of using your eyes to control things. The tiny Eyefluence sensors are attached to the inside of an Oculus Rift virtual reality headset and detect the smallest movements in your eyes. I blinked, turned my head, and moved my eyes around, but Eyefluence could still track when and how I wanted to control something. I could navigate through a menu without using my hands, a keyboard, or a mouse. It was fast. It only takes about a minute to learn how to follow Eyefluence’s instructions, after which you can start controlling things that are before your eyeballs. This could very well supply a major ingredient missing from virtual reality headsets and augmented reality glasses.

Israeli startup Vayyar uses 3D imaging with radio waves to see through solid surfaces. It can be used to show a 3D model of a cancerous growth in a woman’s breast. It can be used to detect the heartbeat of a person, such as a sleeping baby, in another room. Or it can be used to find studs or pipes that are hidden in a wall. It can see through materials, objects, and liquids. Vayyar can also detect motion and track multiple people in large areas. It works by shooting a radio wave into a solid object and measuring all of the ways that the wave bounces around as it hits various objects. Vayyar collects the reflections and analyzes them, putting them back together as a 3D image in real time. While it is powerful, the amazing technology doesn’t use a lot of power. It comes from seasoned technologists Raviv Melamed, Miri Ratner, and Naftali Chayat, who were inspired by military technology. Melamed, formerly of Intel, told us that the technology is inexpensive. And yes, if you have the ability to see through things, you’re Superman. 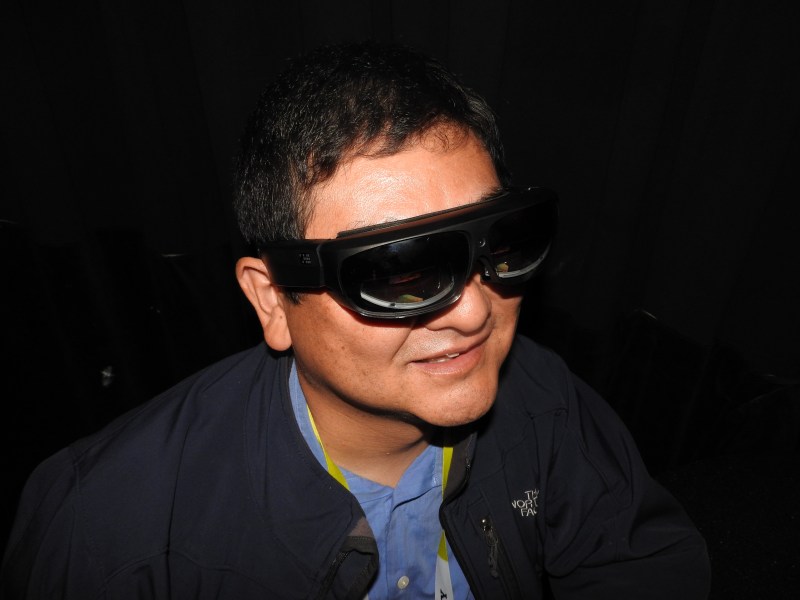 The Osterhout Design Group has taken its technology for night-vision goggles and turned it into augmented reality headsets for government and enterprises. The newest R-7 headset is like looking at a 65-inch TV screen that’s right in front of your eyeballs. The company demoed a future-generation technology with ultra wide-angle viewing. The R-7 has a 30-degree field of view, but the future product has a 50-degree field of view with a 22:9 aspect ratio. It’s more like sitting in the best seat in an IMAX theater, said Nima Shams, vice president at ODG. I was able to look at it and see a wide Martian landscape. The glasses are packed with technology, from Wi-Fi and Bluetooth radios to gyroscopes and altitude sensors. The R-7 costs $2,750, but there’s no telling how much the wide-angle display will be. At some point in the future, I fully expect that his experience is going to be better than going to an IMAX theater. 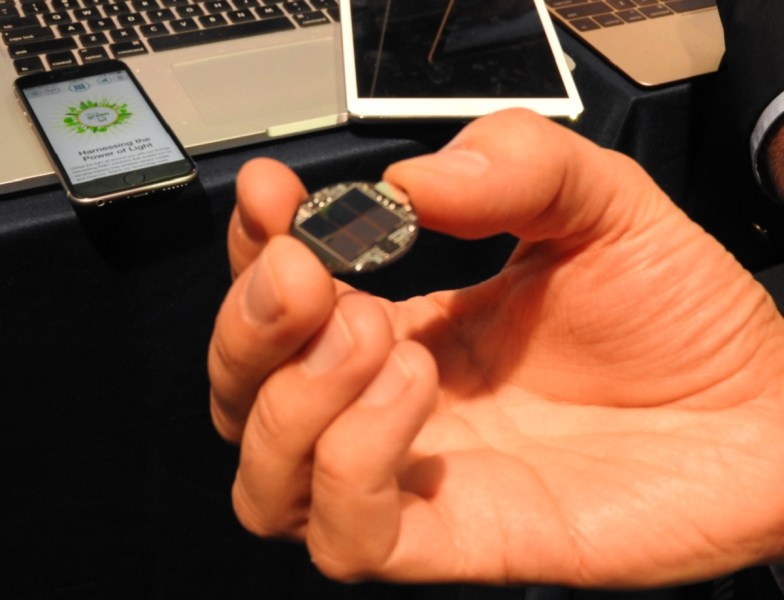 Above: This solar-based Bluetooth energy beacon doesn’t need a battery.

Beacons are devices that can connect to your smartphone using a local Bluetooth network. Retailers like to use them to send special offers to your smartphone. That technique can target people walking by a specific store and get them to come inside. But Beacons often run out of battery. By combining technology from Spansion (which Cypress Semiconductor has acquired) and Cypress, the product designers can create a Beacon with a solar energy array. Using that technology, the device can generate its own electricity and doesn’t need a battery. You can embed this kind of technology in any device that is part of the Internet of Things (smart and connected everyday objects). You could put a Beacon in a cemetery and use it to send a story about the life of someone buried there. “We want the Internet of Things, but nobody wants to change 20 billion batteries,” said Eran Sandhaus, vice president at Cypress Semiconductor. Hundreds of potential advertisers are looking at it. We’ll definitely need new sources of power, whether kinetic or otherwise. This is how the Internet of Things is going to become practical, with billions of smart, connected objects that operate on the slimmest amount of power.