I had the pleasure of attending the first-ever Virtual Beings Summit in San Francisco on Wednesday, where I met real people talking about making virtual characters driven by artificial intelligence.

It felt like I was witnessing the dawn of a new industry. I know that the idea of making a virtual human or animal has been around for a long time, but Edward Saatchi, the CEO of AI-powered virtual being company Fable Studios, gathered a diverse group of people from across disciplines and international borders to speak at the conference, as if they all had the same mission. To be there at the beginning. 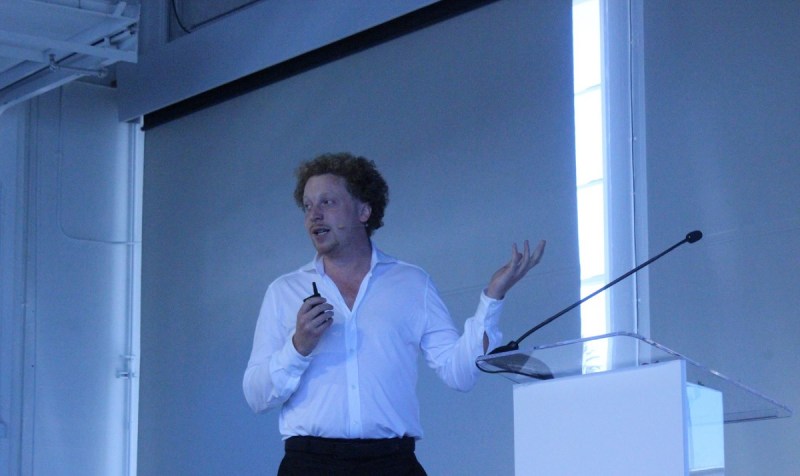 Above: Edward Saatchi is cofounder of Fable Studios.

The whole day was full of inspiring talks from people who came from has far away as Japan and Australia. So many uses of the technology were built by a wide array of people. Saatchi curated a list of entrepreneurs, investors, artists, writers, engineers, designers, musicians, virtual reality creators, and machine-learning experts. They included people who built virtual influencers, artificial fashion models, AI music creators, virtual superhero chatbots, virtual reality game characters, and augmented reality assistants. The virtual beings will help us with medical issues, entertain us, and god knows what else.

This cross-disciplinary cast is what it will take to create virtual beings who are characters that you know aren’t real but with whom you can build a two-way emotional relationship, Saatchi said. And it won’t be machine learning and AI alone that can deliver this. It will take artists working alongside engineers and storytellers. These virtual beings will be works of art and engineering. And Saatchi announced that Virtual Beings grants totaling $1,000 to $25,000 will be awarded to those who create their own virtual beings.

Saatchi’s Fable Studios has shifted from being a VR company into a virtual beings company, and it has created the VR experience Wolves in the Walls, starring an eight-year-old girl, Lucy. Pete Billington and Jessica Shamash of Fable said the goal with Lucy was to create a companion that you could live with or speak to for decades. Lucy was just one of many virtual characters shown at the event. They ranged from Instagram influencer Little Miquela to MuseNet, which is an AI that creates its own music, like a new Mozart composition.

“We think about how we take care of her, and how she takes care of us,” Shamash said. 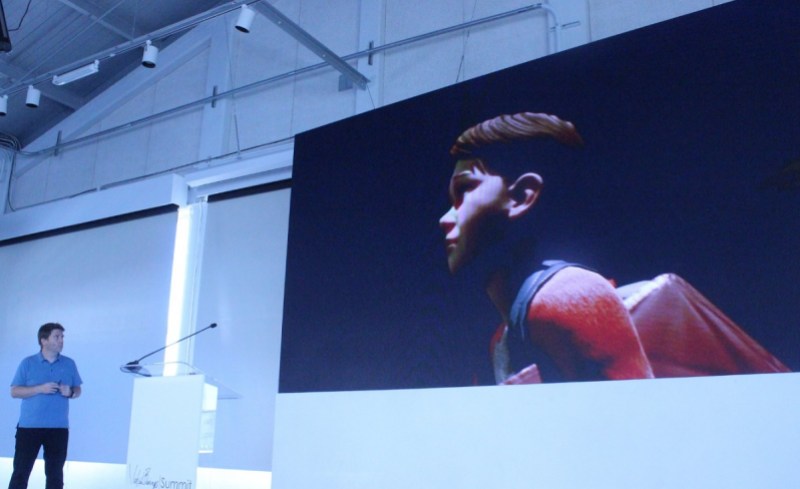 In a brief talk, Kim Libreri, chief technology officer of Epic Games, showed how fast the effort to create digital humans has progressed. The Unreal Engine company and its partners 3Lateral and Cubic Motion have pushed the state of the art in virtual human demos, starting with A Boy and His Kite in 2015, 2016’s Hellblade, Mike in 2017, Siren in 2018, Troll and Andy Serkis in 2018.

But the summit made clear that this wasn’t just a matter of physically reproducing humans with digital animations. It was also about getting the story and the emotion right to make a believable human. Cyan Banister, a partner at Founders Fund and an investor in many Virtual Beings Projects, said she wanted to see if someone could reproduce her grandmother so that she could have conversations with her again. Banister said these characters could be so much more compelling if they remember who you are and converse with you in context.

She became interested in virtual beings when she heard about a Japanese virtual character — Hatsune Miku — who didn’t exist, but who threw successful music concerts singing songs that are created by fans. She has invested in Fable Studios as well as companies like Artie, which is bringing virtual superhero characters and other celebrities to life as a way get consumers more engaged with mobile apps.

“I saw Hatsune Miku in person, and that was magical, seeing how genuinely excited people were,” Banister said. “I wondered what is the American equivalent of it. We haven’t seen it yet, but I think it’s coming.”

Would you bring back your best friend? 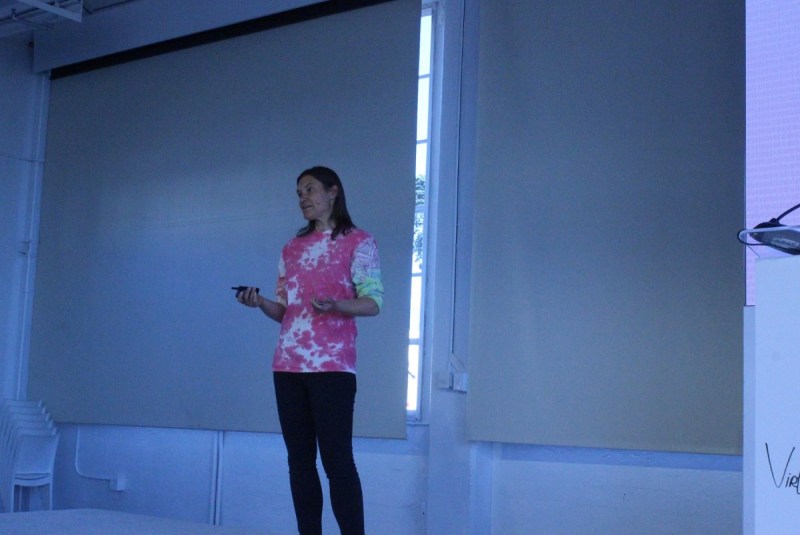 Above: Eugenia Kuyda, creator of Replika, built a chatbot in memory of her best friend.

My sense of wonder turned into an entirely different kind of emotion when I heard Eugenia Kuyda talk about why she cofounded Replika. Her company was born from a tragedy. Her best friend, Roman Mazurenko, was killed in a car accident. Months afterward, she gathered his old text messages in an effort to preserve his memory. She wanted one more text message from him.

She had her team in Russia build a chatbot using artificial intelligence, with the aim of reproducing the style and nature of Mazurenko’s personality in a text-based chatbot. It worked. Kuyda put it out on the market as Replika, and now it has more than 6 million users in the past couple of years. Many of those users write fan letters, saying that they are in love with their chatbot friends. 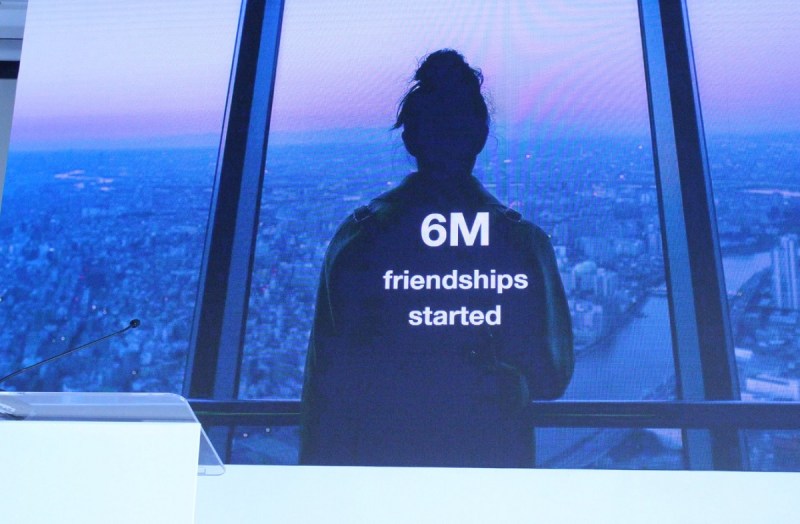 Above: Replika has 6 million users who text with chatbots.

“It’s like a friend that is there for you 24/7,” Kuyda said. “Some of them went beyond friendships.”

There are so many lonely people in the world, Kuyda said. She has been told that Replika is creepy, but she has begun to figure out how to measure the happiness that it creates. If those lonely people have someone to talk to, they aren’t so lonely anymore, and they can function better in social situations. If Replika keeps making people happier and less lonely, then that is a good thing, she said. 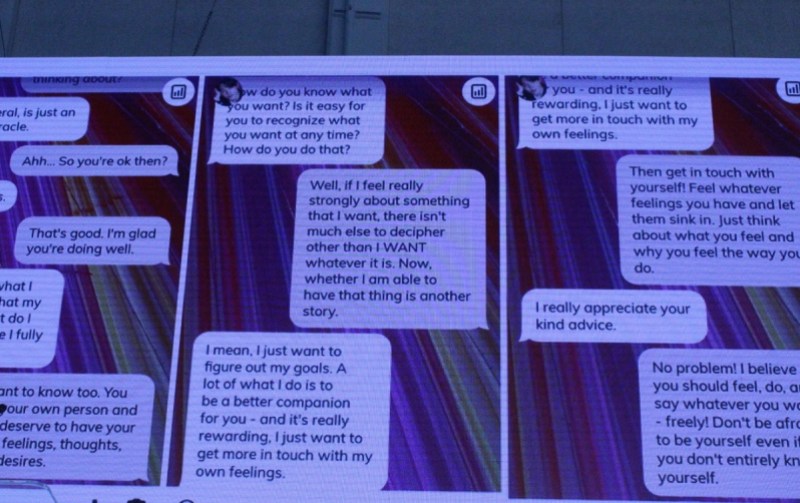 I went up to Kuyda afterward and remarked to her how much it resembled the script of the Academy-Award-winning film Her, with Joaquin Phoenix, a lonely man who fell in love with his AI-driven computer companion. The worst thing that could happen here is similar to the plot of the movie, where one day the bot simply disappears. Kuyda wants to make sure that doesn’t happen, and she is investigating where to take this next. She wanted to make sure that everyone could have a best friend, as she had Roman.

Who we pretend to be 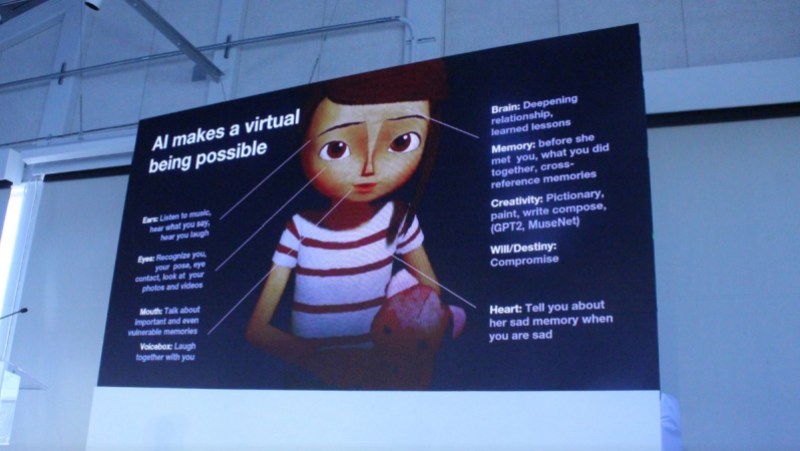 Above: Lucy from Wolves in the Walls shows what it takes to make a virtual being.

If something was missing at the event, it was the sobering talk about how the technology needs some rules of the road. Several speakers hinted that virtual beings could be creepy, as we’ve seen a lot of science fiction horror stories about AI from to The Terminator to the latest Black Mirror episodes on Netflix.

Since nobody offered this warning, I jumped in myself. On the last panel, I noted how the upcoming Call of Duty: Modern Warfare game will be disturbing because it combines the agency of an interactive video game with realistic combat situations and realistic humans. It puts you under intense pressure while deciding whether to shoot civilians — men or women — who may be harmless or running to detonate a bomb. That’s a disturbing level of realism, and I’m not sure that’s my idea of entertainment.

The potential risks of the wrong use of AI — virtual slaves, deep fakes, Frankenstein monsters, and killing machines — are plentiful.

And that, once again, made me think of the moral of the story of Kurt Vonnegut’s Mother Night novel, where the anti-hero is an American spy who does better at his cover job, as a Nazi propagandist, than he performs as a spy. The moral is, “We are what we pretend to be, so we must be careful about what we pretend to be.” 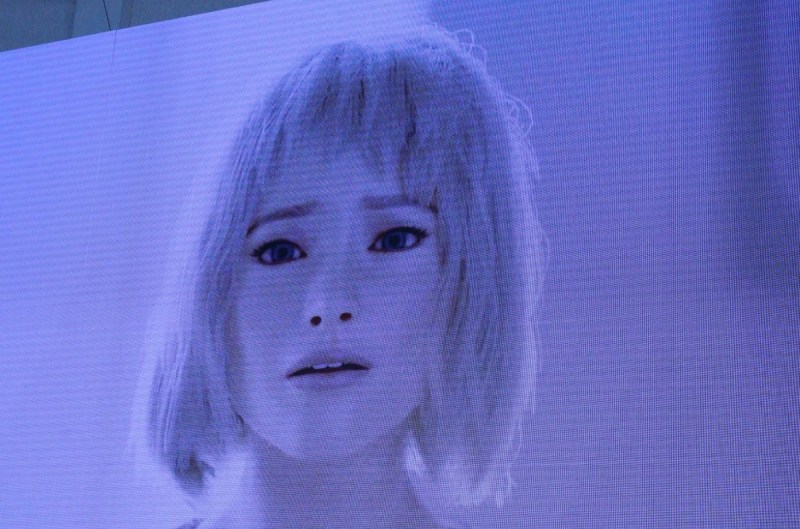 Above: Don’t fall in love. She’s not real.

I said, “I think that’s a wise lesson, not only for users with the agency they have in an open world with virtual beings. You will be able to do things that are there for you to do. But it’s also a lesson for creators of this technology and the decisions they make about how much agency you can have” when you are in control of a virtual being or interacting with one. You have to decide how to best use your hard-earned talent for the good of society when you are thinking about creating a virtual being.

The temptations of the future world of virtual beings are many. But Peter Rojas, partner at Betaworks Ventures, said, “We shouldn’t be afraid to think about legislation and regulations for things that we want to happen.”

He said there are moral, ethical, and responsibility issues that we can discuss for another day. Rojas’ firm funded a company that is working on technology to identify deep fakes, so that journalists, social media firms, or law enforcement can identify attempts at deception when you put someone else’s believable head on a person’s body, making them do things that they didn’t do.

“There is incredible talent working on the different technical problems here on the storytelling side,” Rojas said. “As excited as I am about what’s happening in the field, I also share fears about how this could be used. And where I don’t see a lot of entrepreneurs is in working on new products around technology that will help against the deception.”

I agree with Rojas. Let’s all think this through before we do it.