Neil Druckmann, the vice president at Naughty Dog and director of The Last of Us Part II, lashed out at trolls who have harassed and threatened voice actress Laura Bailey because her fictional character killed a beloved character in the sequel. Druckmann expressed outrage that haters threatened to kill Bailey’s young child and do other horrible things to her.

In a video interview with voice actor Troy Baker (who plays Joel), Druckmann denounced the tribalism among the haters and trolls who are angry about the game’s killing of the character and then being forced to play as the character who did the killing.

“There was so much I was not prepared for the reaction to this game,” he said. “At the end of the day, what matters is what the team thought of it. And when we got the amazing reviews. … Review scores are cool. But seeing your pride is what I live for. Fuck the haters. Nothing makes me prouder in my life than working on this game.”

Warning: This discussion has some story spoilers for The Last of Us Part II.

Man. I try to only post positive stuff on here… but sometimes this just gets a little overwhelming. I blacked out some of the words cuz, ya know, spoilers.

Side note. Thank you to all the people sending me positive messages to balance it out. It means more than I can say.❤️ pic.twitter.com/kGyULWPpNu

This harassment of the actress is reprehensible behavior and a sure-fire way to discourage talented people from making games. But we shouldn’t let the horrifying reaction give us the impression that this is what everyone thinks.

In fact, I checked in with Spiketrap, the social analytics company that uses artificial intelligence to figure out the overall sentiment on the internet about games and other entertainment. This helped me put in perspective this controversy, which reportedly led players to “review bomb” The Last of Us Part II on review aggregator Metacritic, where reviewers gave it a rating of 94-out-of-100 and players gave it a rating of 55.

Fortunately, The Last of Us Part II is selling well. The haters haven’t stopped it, as Sony announced the game sold more than 4 million copies in its first three days. On top of that, Parviz Mansoori, product manager at Spiketrap, said the analysis of all of the things people are saying about the game — on Twitter, video, Reddit, forums, and news articles — renders a majority positive sentiment. That is, people are saying more positive things about the game than negative things, even though we may be fixated on the negative conversations.

The part that involves Bailey — that Abby kills Joel — saw a spike of conversations from June 18 to June 20 as the game was being released. But it has also died down, so that other conversations have room to breathe. While people hating the part about Abby killing Joel caused a spike in the conversation, that was overwhelmed by positive sentiment in general for the game. Overall, The Last of Us Part II has a score of 70% positive conversations, and Spiketrap says that scores in the 61% to 100% range mean that a game is doing well, said Mansoori. 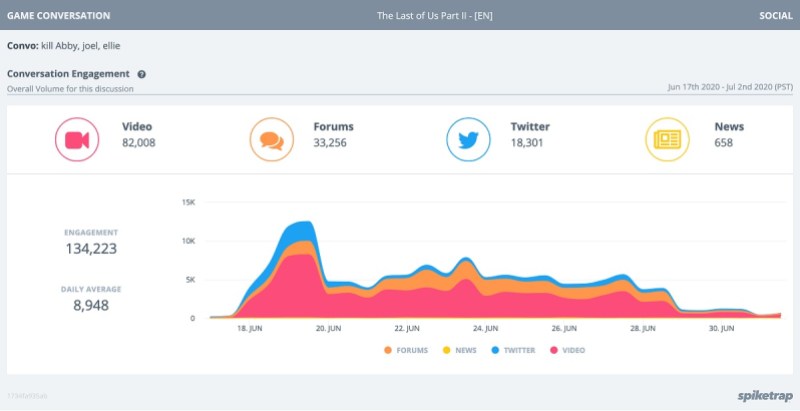 Above: The conversation about Abby killing Joel, as recorded by Spiketrap.

Abby killing Joel dominated about 50% of the whole conversation in the past month, Spiketrap found, and much of the sentiment about that particular point was negative. But much of the argument happened from June 18 to June 20, with the game being released on June 19. I think that means a lot of people jumped the gun. They were shocked to find out that Joel died and they were angry about that part, which occurs early in the game. Heck, I was angry that Joel died.

But once people got their hands on the game and finished it — some 35 to 40 hours of gameplay later — they weren’t arguing about it as much on social media. That is, when they finished the game and saw how good the game really was, people stopped arguing about the decision to kill off Joel. It was during these initial days, from June 18 to June 20, that the conversation about review bombing also happened — again, before gamers finished playing the game. During those days, the game journalists (who had the game before it came out) rated the game at 95 out of 100, while the gamers (who did not have the game until the 19th) rated it at one out of 10. The gamer rating has since moved to 5.5.

Death threats were a much smaller part of the conversation — accounting for only 6% of the conversation about Abby killing Joel, and the sentiment was negative. I take that to mean that most people were appalled that Bailey was getting death threats. Overall, despite the brouhaha, it appears that many of the fans view the game and Naughty Dog favorably. I think that Druckmann and Baker and Bailey should take that to heart, and continue to be proud of their work. I don’t want to minimize trauma over getting so much toxicity, but I do want to put that toxicity in perspective.

As disturbing as the death threats are, relatively few people are holding on to that anger over time. Perhaps they just have some new things to argue about, like Sony’s next big game, Ghost of Tsushima. 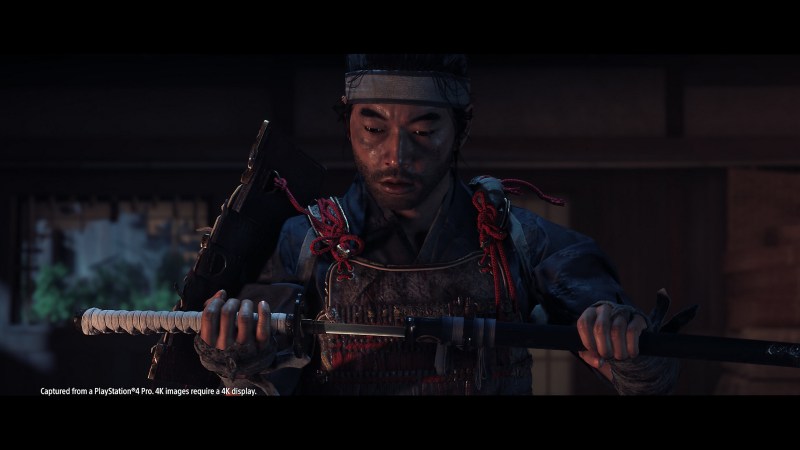 Above: Jin Sakai is a likable hero.

I loved playing Sony’s new exclusive, Ghost of Tsushima, debuting worldwide today on the PlayStation 4. It is a beautiful game — not quite as well written as The Last of Us Part II, but moving nevertheless. I enjoyed going back in time and living in a world full of Japanese traditions. But I felt aware that the game was a small slice of history, placed during a time when Japan could rightly claim it was the victim of foreign invaders.

One of the mechanics in the game is the Divine Wind, which sounds a lot more ominous when you consider that in Japanese, that’s “kamikaze.” The wind guides you in the game, and it evokes the spirit of the hero’s fallen father. The wind and the storms it produced took out the Mongol fleets on a couple of occasions during the real history, and that contributed to Japan’s spirit of invincibility. That attitude continued until World War II, and it led to Japan’s downfall. As an American, I would be worried about this wind, but the wind has no negative connotations in the game at all.

Some reviewers criticized the game for representing an American view of Japan, as development studio Sucker Punch is a Seattle-based company. That view of inserting a colonialist attitude of ancient Japan, before its colonial days, is something that Westerners might do. But Sucker Punch didn’t do this and didn’t make a lot of mistakes, beyond having some poor dialogue. And it turns out that Japanese gamer reviewers love the game. Famitsu gave it 100-out-of-100 and said, “There is no sense of discomfort in this foreign-made Japanese world.”

If an American company made American mistakes and imposed an American world view on Japan, then you can be pretty sure Japanese gamer reviewers wouldn’t like that. In other words, it looks like Sucker Punch succeeded in taking us back to Japan in the 13th century and making us feel like we were there. That’s a fine achievement, and a good way to judge the game.

I haven’t looked closely at Spiketrap’s data about Tsushima, but I do know that the vast majority of it so far is positive. I don’t think the fact that Americans made the game is going to hurt its sales. As much as I am sensitive to the fact that people should tell their own stories, in this case I would hope that people judge this game for what it is, rather than who made it.

Above: 26% of game devs say their household income has declined during the pandemic, in a GDC survey

Lastly, I’ve been thinking about what a longer lockdown will mean for the game industry. U.S. states are rightly going back into lockdown, though some people are still defying doing so, as the number of coronavirus infections hit a record 77,000 in one day in the U.S. I think it means a lot more people in the game industry are going to need real help.

The Game Developers Conference reported in a survey that indie game developers and freelancers were hit harder than expected during the pandemic. While only 8% of developers have lost jobs, a third have said their projects have been delayed, and 26% said their households have lost income during the pandemic. This is happening even as triple-A games and mobile titles alike are hitting record revenues.

The consequences of an extended lockdown have to be considered now, as more developers will have to cope with health insurance risks, mental health challenges, and productivity setbacks as families cope with kids unable to return to school. I think that the richer game publishers and financiers should think about supporting the sagging indie community with more funding for their projects or some kind of collective health insurance that could help those in emergencies. The GDC has identified some unseen pockets that are suffering out there, as we realize that this notion of a rising tide lifting all boats in the game industry is a fiction. Let’s help those who need it.