For more than five years, Vuforia has been selling augmented reality. More than 30,000 apps have used the Vuforia platform for AR, which is owned by enterprise technology company PTC. Another 37,000 apps are in development, and there are more than 250,000 registered developers making AR apps, which use glasses or smartphones to overlay computer animations on the real world.

And while those apps have been installed more than 288 million times for things like Lego’s interactive toys or Skylanders Battlecast cards, people viewed AR as a curiosity or a niche, said Jay Wright, president and general manager of Vuforia, said in an interview with GamesBeat.

“Oh my, how that story has changed,” Wright said. “Pokémon Go has been an amazing phenomenon that has brought AR to forefront. It’s super exciting for us. Three years ago, we got a lot of criticism that it was a marketing gimmick.” 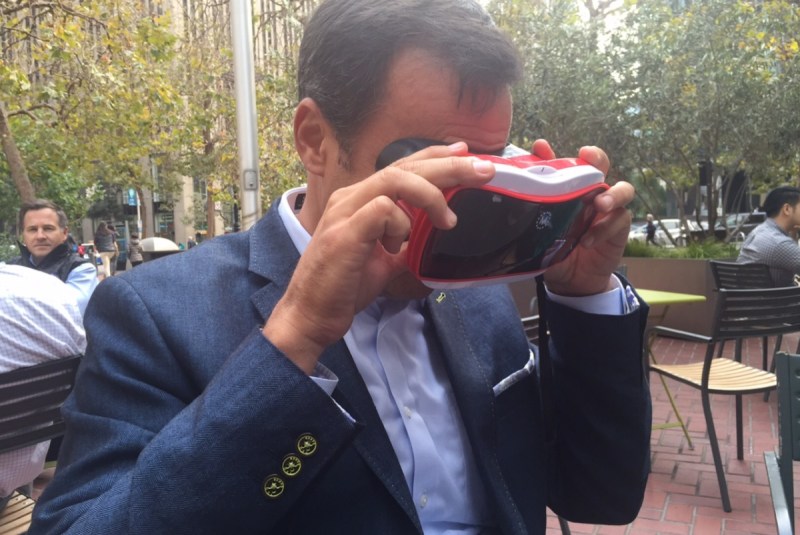 Above: Jay Wright of Vuforia looks at a View-Master AR app.

Perhaps it’s predictable that a herd mentality among investors and brands is driving new excitement for AR, which reaches far beyond games into medicine, education, training, industrial maintenance, and entertainment. AR is expected to be a $90 billion market by 2020, compared to $30 billion for virtual reality, according to tech advisor Digi-Capital. But the proponents of AR don’t care about why it’s suddenly so popular. They’re just happy its time has come and they’re getting ready to ride the wave, just as so many other startups rode the wave of virtual reality.

Even if the Pokémon Go phenomenon starts to run out of steam, its monumental impact (it’s the most successful mobile game launch in history) will leave a lasting positive impression, AR proponents said at our GamesBeat 2016 event. While some people like venture investor Mitch Lasky worry that the success of Pokemon Go is a one-off, or likely not to be repeated, others are saying it’s inevitable for new hits to come, whether it’s AR flash cards in China or training in the enterprise.

“Right now we’re looking heavily at augmented reality,” said Ed Ruth, a director at Verizon Ventures, a corporate strategic investor, speaking at the VR Accelerated event at UploadVR recently. “Pokémon Go is a pretty good example of content overlaying the real world, but as you start to extend that further, you can see things like environments that will be delivered. Or the environment you’re in will have the delivery of different types of content.”

CastAR is clearly one beneficiary of the new interest in AR, as it attracted a couple of seasoned top executives. The AR glasses company is making tabletop entertainment in AR, such as board games. And it attracted former LucasArts chief Darrell Rodriguez and former Disney exec Steve Parkis as its top executives.

“I think that Pokémon Go has probably generated more revenue than the entire VR industry,” CastAR cofounder Rick Johnson said during a panel at GamesBeat 2016. “Which is kinda crazy for a first-generation AR product.”

“Pokémon Go has defined the AR category for the consumer,” added Nick Beliaeff, vice president of production at Spin Master, which has an AR drone game. “It’s made our job easier. It’ll make it easier to exceed expectations.”

The funny thing about Pokémon Go is that it’s not even real AR to most observers. It doesn’t use computer vision, as Vuforia does, to align an object in the real world with the animated overlay. Some special hardware is coming that can do that. And when it arrives, AR will be really cool.

Of course, it may be a long time before AR glasses offer high quality, affordability, and the right form factor. Microsoft’s HoloLens AR headset costs $3,000 today and it is embarrassing to wear in public. Osterhaut Design Group has $2,700 glasses, and Meta is selling $667 AR glasses. They’re all bulky, and they will need more production cycles before they will be small enough and fast enough and have enough battery power.

We can see that those devices will get better. Last week, Intel showed off Project Alloy, which combines both VR and AR in what Intel chief executive Brian Krzanich called “merged reality.” What Pokémon Go is doing for these devices is showing them the light at the end of the tunnel. Once these devices are perfected, they can offer the exact kind of Pokémon Go experience that everybody wants to have.

The whole AR industry owes a debt of gratitude to John Hanke, CEO of Niantic Labs, the creator of Pokémon Go. He was bullish on AR devices at our GamesBeat 2016 event.

“We’ll definitely take advantage of other kinds of AR devices as they become prevalent out in the market,” he said. “I’m excited about investing in that area, about building prototypes, and bringing our gaming products to that hardware as it comes to market. Maybe we’ll be helping some of that hardware be successful in the marketplace. It’s a really exciting time for anyone making games, anticipating the kinds of experiences we’ll be able to create as those devices transform people’s experience out in the world.”