This week saw a changing of the guard at Zynga, as founder Mark Pincus gave up his operating role while his successor, Don Mattrick, consolidated his control of the social gaming giant. The change was a big milestone for Pincus, who didn’t have to make such a move. But it was probably the right thing to do, and it is part of the natural order of things in gaming, where change is constant. 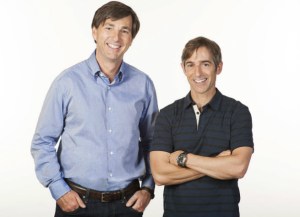 Above: Don Mattrick (left) and Mark Pincus of Zynga.

Pincus is a veteran entrepreneur who had been thrown out of past companies. He was one of those rare serial founders who held on to voting control of his company even after it went public. But the company’s results were so marred by the failed transition to casual mobile games that he brought in Mattrick, a veteran of hardcore game companies such as Microsoft Xbox and Electronic Arts, to right the ship. Things have been improving, and with the latest positive quarterly report, Pincus surrendered his chief product officer title and became a non-executive chairman. Mattrick brought in his own crew.

Pincus ran Zynga for seven years. A 2013 study by Temple University and the University of Missouri found that the longer a CEO is in power, the more likely he or she is to stop reacting to market conditions and customer desires, ultimately hurting a company’s performance. The average CEO holds office for 7.6 years, based on a review of 365 U.S. companies from 2000 to 2010. The optimal length is 4.8 years. The Conference Board found that average CEO tenure had dropped from 10 years to 8.1 years from 2000 to 2012. Pincus said he made his own decision that the time was right to change.

So Pincus had a good run, especially for a founder in Silicon Valley. He figured out a viable social gaming business when Facebook decided to open up an application layer on its social network. With Zynga Poker, Pincus found that virtual goods and micro-transactions could support a free-to-play game-as-a-service. He survived a huge wave of competitors that were in a race to become the biggest social network players.

Above: Farmville 2 on an iPad.

Zynga came up with hits like FarmVille, CityVille, and FrontierVille. It amassed a billion players and turned nongamers into casual players. And it gave Pincus the ambition and vision to change the world through play. Zynga put the traditional game industry’s leaders to shame. The others, like Electronic Arts, THQ, Activision and many others, couldn’t figure out how to catch up with Zynga on the fastest-growing game platform in history. A lot of those people thought that Pincus was stupid, didn’t understand games, and was bad for the industry. Yet they couldn’t beat him.

But Facebook pulled the plug on Zynga and rebooted itself in the name of saving its larger social network from excessive Zynga spam. And then Facebook itself was disrupted by a resurgence in free-to-play mobile gaming, Zynga wasn’t ready. Pincus had made the wise decision (at the time) to pull back from the iPhone and double down on Facebook. Other unfortunate companies like SGN dove headfirst into mobile too early, when the water was too shallow.

But as others learned how to make money at mobile, Zynga wasn’t finding the right hits that could monetize. Its growth peaked at the end of 2011, right about the time it went public. But even though he didn’t avoid a train wreck in earnings that cratered the company’s value, Pincus managed to raise a billion dollars in an initial public offering. That war chest became invaluable as Zynga’s users and revenues went into a free fall.

By the time Mattrick joined in July 2013, Zynga was in the midst of a full transition to mobile. But it was trying to do so as it was cutting a third of its employees, as its declining revenues could no longer support a huge team. The opportunity cost of this failure was clear as rivals like Supercell, GungHo Entertainment, King, Kabam, and MachineZone grew faster in mobile. To try to change the game, Mattrick used a chunk of the war chest to buy NaturalMotion, one of the leaders in mobile games with high-end graphics, for $527 million.

This spring, Zynga is renewing its assault on mobile with new versions of Zynga Poker, Words With Friends, and FarmVille. If those games are hits, they could move the needle for Zynga in the positive direction. That will give Mattrick more time to come up with brand new franchises.

Mattrick is close to a year into his tenure. He’ll have about six more years before he hits his CEO half-life. He has reset the clock by bringing in a new game studios chief, Alex Garden, former head of Microsoft’s Xbox Live. Garden is bound to make his own changes. Mattrick has pretty much wiped the slate clean in management and brought in all of his own people. It is a calculated bet on people who thrived in other companies.

Zynga’s time to recover and retake the market will likely be stretched out over time. But the company doesn’t have forever. In the meantime, rivals will continue to try to take away its crown in social. Frustrated employees will defect to other companies.

Did Pincus give up the reins at the right time, so that he could save the thing that he created? We’ll find out in the coming months and years. It’s not impossible to turn around Zynga, but its’ going to be a lot of work. Pincus gets credit for getting the company half way there, and Mattrick will have to finish the job.

There are a lot of things that the game industry’s leaders could learn from Pincus, who never really got recognition as a game visionary. They can learn from his successes and his failures. They can also learn when it is right to step back and let somebody else do the job.