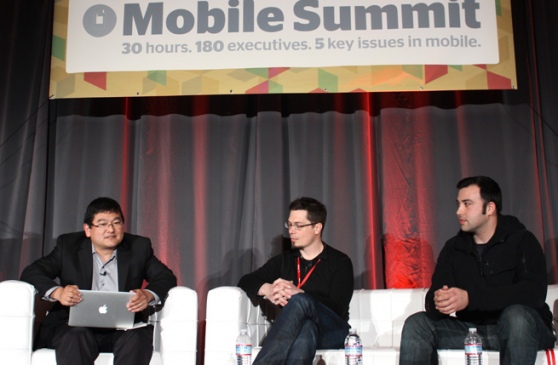 In the past month, what app makers have to spend to get the attention of Apple device users has risen out of control. That’s a tough fact of life that could make survival hard in the Darwinian mobile app ecosystem. Solving this problem is going to require a lot of innovation and clear thinking. And if it isn’t solved, we’re going to see a number of mobile app companies start to die. If Apple and others in the ecosystem don’t handle it right, it could be a bloodbath for developers.

We talked a lot about the consequences of the rising cost of user acquisition at our VentureBeat Mobile Summit 2012 this week at Cavallo Point in Sausalito. Our three session chairs: Gabriel Leydon, chief executive of Machine Zone; Maria Alegre, CEO of Chartboost; and Chris Akhavan (pictured top right), vice president and general manager of strategic partnerships at Tapjoy, drove the discussion about solutions and strategies to deal with the rising costs.

This problem applies to free-to-play games, where companies have to spend money on marketing and advertising to get new users. If they spend more on acquiring users than the lifetime value of those users in terms of future revenues, then the companies will start losing money. The costs have been steadily rising, but the entry of Gree, which pledged to spend $50 million on mobile marketing in the U.S., has pushed those costs over the top. Costs will only get worse this year as companies such as Zynga, Electronic Arts, Gameloft, DeNA, Perfect World, and Tencent battle for mobile market share.

A year ago, the costs were under control because developers like Tapjoy were using low-cost incentivized installs, which rewarded users with virtual goodies for downloading other apps. But Apple shut that down because it led to manipulation of the top 25 charts. Add to that Apple’s crackdown in February on bot-driven third-party marketing services (because they also led to chart manipulation), and costs have trended upward.

Some of the tips are kind of random, and they come from people who have had deep experience in this young market. For instance, it pays to release your app on a Thursday since Apple features apps that appear on that day. Getting featured on Apple’s store is perhaps the best way to get discovered without having to pay anybody a lot of money.

First and foremost, the best way to control your user acquisition costs is to have a great app. Great apps spread naturally via word of mouth, and they are more engaging and easier to monetize, Leydon said. A developer such as Epic Games’ Chair Entertainment has set itself apart by creating the Infinity Blade series of games with outstanding 3D graphics. Chair could keep going down that road since mobile devices such as the new iPad are getting better and better. The foundation for high-quality 3D games is in place, with fast processors, great displays, and tools such as Unity 3D. But better graphics is also a dangerous road that led the console game makers to create teams of 100 people or more working for two years at a time.

“CPI is a relative number and should be measured in relation to the LTV of your product,” said Adam Flanders, senior vice president of sales and marketing at Glu Mobile. “If CPI is getting too expensive, the focus needs to move to engagement, retention, and monetization of your product to drive LTV up above CPI costs.”

It is possible, and quite scary, that even great apps could get lost in the App Store, which has a total of 598,154 active apps. Sometimes, great apps need a boost to get noticed. And it helps to have a game that is designed for monetization.

Usually, game designers focus only on making a high-quality app. But it can help to have a user acquisition expert involved in the design of a mobile game. That expert can help design the funnel of activities that lead directly from trying out the game to paying real money for digital bits, or virtual goods, that don’t exist in the real world. And so that expert isn’t flying blind, your app has to be instrumented with analytics, said Greg Canessa, vice president of mobile at Activision Blizzard.

The solutions include moving your apps to Android, where the cost of user acquisition has actually been dropping. Tapjoy took its incentivized installs to Android as well. And while Android’s user count has been on a tear, monetization has been weaker than on iOS. So while Android represents a great release valve on costs, it isn’t a panacea.

Another way developers can bring down costs and bring up installs is through services like FreeAppADay or Iddiction’s App-o-Day. FreeAppADay gets millions of users coming to its site to download an app that has been made free for a day. Iddiction’s Andrej Nabergoj, (pictured middle), argues that a curated list of the best apps will be very appealing to a lot of users. Chartboost, meanwhile, lets developers set up their own networks where they cross-promote games of other developers in a kind of barter system. Alegre said this kind of network can disrupt the ad networks that charge money for this kind of service. FreeMyApps is another app discovery service with its own digital rewards system.

Akhavan said that more intelligent targeting is also essential. But it could get harder now that Apple is doing away with user identities known as UDIDs. That makes it harder to know who your user is and thus to target that user with relevant advertising. There are other ways to target users. Groups are forming to create new identification systems. And apps could access a user’s address book, but they walk a delicate line on privacy when they do so. With the UDID in flux, the state of targeting ads is in flux.

One strategy app makers could use is to publish games for other developers or promote the games of other developers within their own apps. That turns the problem around and helps developers take advantage of high CPIs. Another strategy is to try everything, using multiple promotional networks and going to the trouble of analyzing the return on investment for each one of them. If someone creates an analytics dashboard for managing that activity across networks, it would be quite useful to developers.

Of course, Apple could do a few things to ease the problem, too. It could get rid of its top downloads chart and switch to an engagement chart that ranks apps by the number of daily active users. Those are the apps that have users coming back over and over. Of course, you might see something like Draw Something or Facebook dominate that list. Improving how it surfaces and promotes new content through something better than Genius or Game Center is a must. Apple bought app search firm Chomp, and most observers are expecting that to result in improved, low-cost ways to surface good apps.

In the absence of action from Apple, the middle-layer companies could make a difference. Gree and DeNA have built mobile social networks in Japan that have created a lot of virality and improved engagement among users. They’re launching networks in the U.S. that are attempting to do the same thing, although it may be a while before they really work.

Facebook Mobile, which now has hundreds of millions of users, has come on strong on the social front, enabling users to discover new mobile apps based on the activities of their friends. A lot of that may be through what some users consider to be spam. Just a month ago, Leydon wouldn’t have considered putting Facebook Connect into his games. But Draw Something grew to more than 50 million downloads in less than two months, thanks in no small part to the virality of Facebook Mobile. Twitter is also going to make a lot of impact in mobile promotions this year.

The rising cost of user acquisition is a tough problem. It takes the whole ecosystem to solve it. But even at this point in the growth of the App Store, Leydon says there has never been a better time to make mobile games and apps.