We dove deeper into blockchain, cryptocurrency, and games at our GamesBeat Summit 2019 in Los Angeles. We had a panel on it last year, but the game industry leaders that are diving into blockchain games have more credibility now.

The skeptics persist, as cryptocurrency scams and fraud are still plentiful. There’s a Gold Rush mentality that is aptly scaring off a lot of game developers from diving into the space. Some have looked at games like CryptoKitties and concluded that blockchain games are still too primitive.

But the game veterans who have studied this emerging market are excited about it. What’s different now is that more game company leaders who have been successful in previous generations are exploring blockchain.

Just this week, Microsoft threw a lot of its cloud computing weight behind blockchain. Ubisoft is also active in blockchain games, but we weren’t able to secure a speaker from them.

Some of the believers think that blockchain will be key to gaming dreams such as Ready Player One, the Metaverse, The Matrix, or Snow Crash. Meanwhile, big game companies like Electronic Arts, Activision Blizzard, and Take-Two Interactive are on the sidelines. 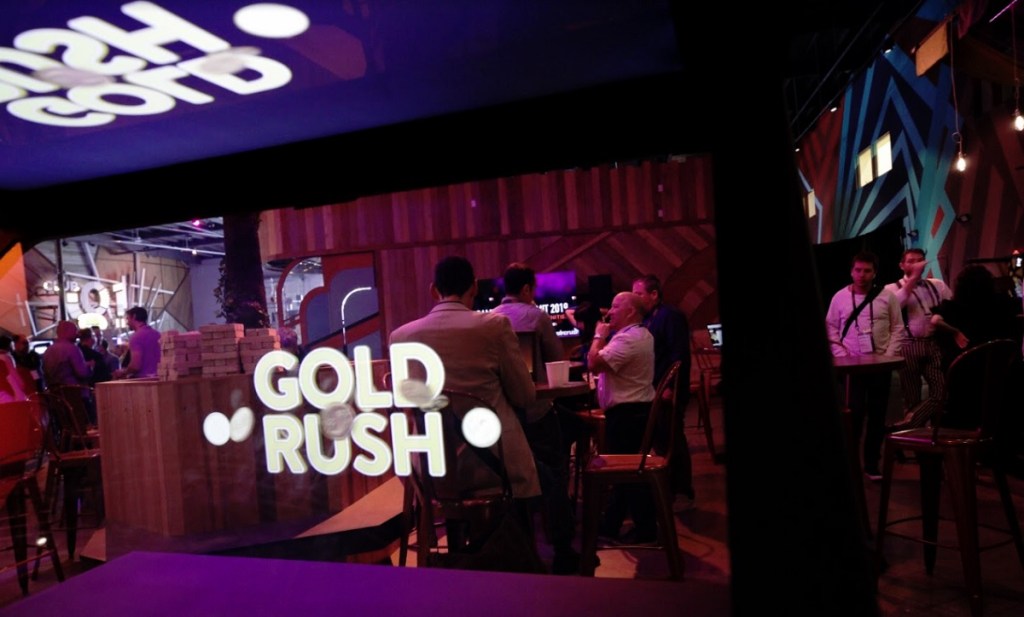 Above: The blockchain Gold Rush at Two Bit Circus, home of GamesBeat Summit 2019.

Our speakers included Kevin Chou, CEO of Forte and former CEO of Kabam, interviewed by Mike Vorhaus. We also had a panel on blockchain games moderated by Concept Art House CEO and Fifth Era partner James Zhang; and I moderated a closing session with Brock Pierce, chairman of the Bitcoin Foundation and founder and funder of numerous cryptocurrency startups.

I’ll go over the highlights of what each person said, but I’ve also included the videos of what they talked about. I also interviewed Miko Matsumura separately on camera. And Randy Saaf, CEO of Lucid Sight, also spoke in one of our lightning rounds. I’d say that’s a pretty good representation of the crypto folks across the board at our summit.

Riding new waves is his forte

Chou helped set the tone by being one of the first to hit the stage. He was fascinated by the combination of cloud-based mobile gaming and free-to-play economies, and he rode that wave at Kabam. Coupling a new technology and a new business model is what creates “explosive innovation,” Chou said.

“What I love about the gaming industry is that we’re at the forefront of these new technologies and business models,” he said. “Blockchain has a lot of things from cryptography to decentralized computing to trustlessness, immutability. A lot of technologies come together. Where we are just starting to scratch the surface is the new business model around it.” 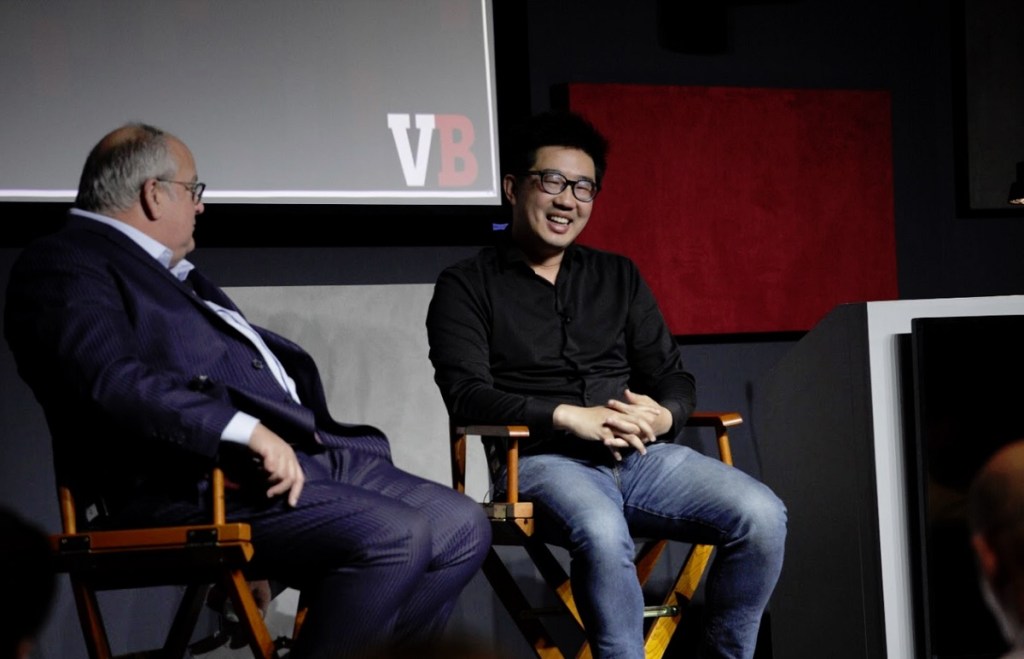 Above: Kevin Chou, CEO of Forte, and Mike Vorhaus of Vorhaus Advisors.

The new economic model is decentralization, which does not use a centralized entity to make decisions. Rather, it uses an open-source community tied together by a token. No one party can control it. The crypto industry hopes game companies will pioneer a lot of the uses of the tokens.

“I think it’s going to be one of the real foundational changes,” said Chou, whose company Forte is creating a blockchain game engine technology to make blockchain integration easy for developers.

Chou noted that the blockchain will someday enable players to take assets created in one game and take them to another, Chou said. More likely, we’ll soon see peer-to-peer communities emerge where users create content, own that content, and sell it to their friends, he said.

In some ways, Chou said that free-to-play is broken, with a lot of player anger and a narrow focus on a small base of players who buy things. Blockchain could expand that base dramatically, he said, and that will ultimately fix those economies so they work better.

“In our Kabam games, we had to figure out how to balance a game when there was one player spending $10,000 in the game and another spending $5 and another spending nothing but with a lot of hours,” he said. “How do we balance that? It devolves over time to pay-to-win. It feels bad, and it’s not how our actual real world economy works. Blockchain has the opportunity to bring much more balance back into this. How do we design gaming worlds and economies to be much more like a real-world economy?”

If you can reach this balance, the developers and players can be partners, rather than being at odds.

Roy Liu, head of business development at Tron Foundation, noted that Tron has a lot of momentum from its $140 million BitTorrent acquisition last year and its $100 million Tron Arcade fund for blockchain games that use Tron.

Tron already has 110 decentralized applications that are built on top of the Tron blockchain platform. He thinks blockchain games will take off in the games of chance, skills games, strategy, and simulation genres.

“At the end of the day, it’s about the economies,” Liu said.

Yet he appreciated Chou’s presence as a sign of validation by game veterans. Liu wants the market to have more accelerants.

He said that games like Apex Legends and Fortnite have enabled games to grow far beyond $100 billion. But he hopes that blockchain will help take that beyond $500 billion. And one way to do that is to create more roles and ways to play for gamers so that they get engaged and stick around.

“For us, we can make Ready Player One, for real,” Liu said.

Matsumura backed the conversation up to its fundamentals. He thinks of cryptocurrency as “open source money.” About 10 years ago, he said, the internet started “printing its own money” with Bitcoin, and he started looking into it.

Matsumura avoided the scammers in 2017 and teamed up with Gumi, a Japanese game company, to form Gumi Cryptos, a $30 million investment fund.

He got excited because he believes blockchain is a new way of recording history, by creating an agreement about what happened, through a consensus-building process. Then that history becomes public and immutable. It’s a series of incentives that creates decentralization and digital scarcity.

“The thing people don’t understand is how beautifully gamified Bitcoin is,” Matsumura said. “The winners of this game will be the ones who can align these incentives.”

That, in turn, will be good for game economies.

“I think the most interesting takeaway I got about Kevin’s talk is that blockchain gaming has the potential to reorganize the economics of gaming itself,” Matsumura said. “The idea that these free-to-play economics are dysfunctional and broken and not actually healthy. Because the game industry isn’t healthy, there is an opportunity for the game industry to improve the flow of value. That’s what I’d love this to be about.” 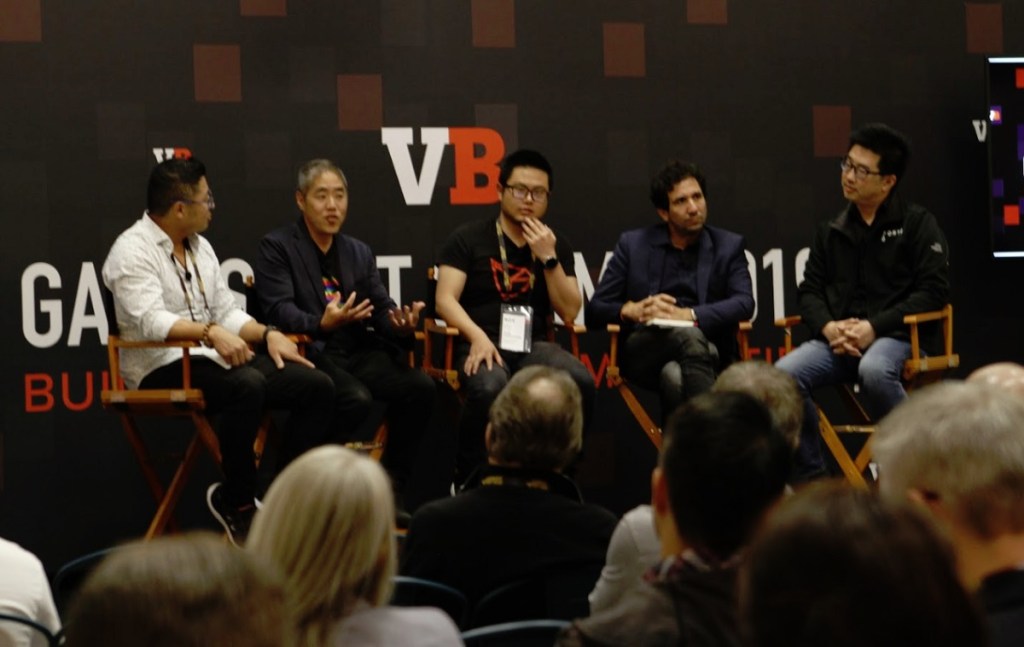 Matsumura believes the potential energy of blockchain — thanks to all of the money pouring into it. Games will add meaning to that value, or give players a reason to play and stay inside the new economies of gaming worlds for a long time.

Randy Saaf of Lucid Sight talked about “play-to-own gaming,” whose company enables players to earn items in games and then, once they’ve earned those items, the players own those items. It’s like owning cards for collectible card games like Magic: The Gathering. Animoca Brands is doing something similar with its own collectible items.

Arthur Madrid, a board member of Hong Kong-based Animoca Brands, previously ran Pixowl, which Animoca bought last year for $5 million. The company is working on the Minecraft-like game, The Sandbox, with blockchain technology. He thinks non-fungible tokens, which can identify unique or rare items, will make a huge impact in blockchain games to come.

Zhang said, “For me, look no further than Magic: The Gathering.”

The mainstream market for blockchain games

While all of these ideas are interesting, Zhang asked how the cryptocurrencies will take off and mainstream adoption will happen. That’s holding back blockchain games for now.

Matsumura thinks that mobile messenger networks like Facebook Messenger, Line, Kakao, and Telegram will introduce cryptocurrencies in the future, and that will lead to mass adoption of cryptocurrency and blockchain games.

“Why would a developer start with integrating blockchain into a game?” Chou asked. “It’s all about incentive alignment. A lot of times as game developers, I don’t want gamers to be trading items. If I make a sword and players trade it, I can’t sell as many swords.”

But Chou wants to use his company’s $100 million fund to get developers on board by simplifying blockchain integration, and then drive mainstream blockchain adoption. 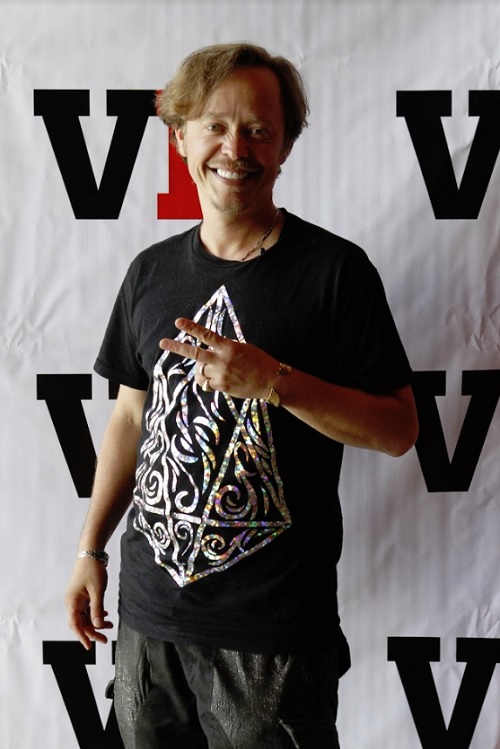 Above: Brock Pierce is interested in marrying gaming and blockchain.

Brock Pierce, our final conference speaker, has a habit of jumping on waves. He was a pioneer of virtual good, digital video, and social casino games. All told, he has raised more than $5 billion for the companies he has founded.

Pierce got involved with Bitcoin early, even to the point where he mined some early Bitcoin and lost the paper that proved he owned it.

But now Forbes has called him a “blockchain billionaire.”

I crossed paths with him in 2012 when he was running Playsino, a social casino games company, and the Clearstone Global Gaming Fund. I recall he was increasingly distracted by Bitcoin at the time, and in 2013, he cofounded Blockchain Capital, which raised money to invest in a large number of blockchain startups.

In 2017, he was a shareholder and adviser for Block.one, which held an initial coin offering (ICO) and sold $700 million worth of its EOS coins. EOS tokens are now valued at around $4.9 billion. He was also an investor in Tether, which like EOS is also one of the largest digital currencies in the $350 billion cryptocurrency market. He left Block.one in March 2018.

Pierce said he has been very concerned about all of the scams and fraud in cryptocurrency fundings. But he believes that blockchain and games will come together through business models such as rewards for playing games or incentives for game developers. He likened the current time to the period when the iPhone came out, and developers were just learning how to create iPhone games.

“That is a very important early indicating piece of data that everyone should be paying attention to,” Pierce said.

Some of the early games will be quite simple, like CryptoKitties. But Pierce said he hopes massively multiplayer online games will integrate blockchain decentralization with a different kind of economy.

A few years ago, Pierce believed it was too early for game developers to care about blockchain. But now he thinks that the time has come to fund blockchain game companies that take advantage of the foundations that have already been laid.

As for the companies like EA sitting on the sidelines, Matsumura said, “I think those companies will never catch up.”