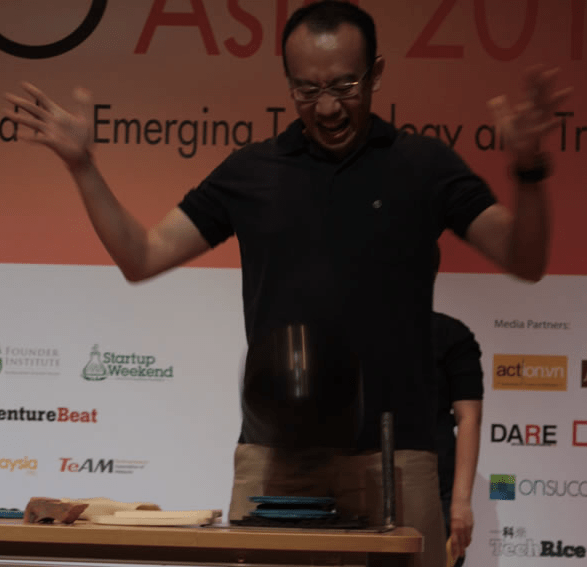 Above: Sofshell team member tries to break an iphone with a bowling ball

Winners of the DEMO Asia conference were just announced.

This brings to an end two days of presentations, and in fact months of grueling preparation by the companies that launched products here at our first DEMO event here in Singapore. Of course, there was plenty of networking too, and now that it’s over, plenty of partying (as I write this!).

Really, every one of the 76 companies are winners, since it was tough enough to get here. Companies qualified from hundreds of applications. We had some pretty eye-catching demonstrations — one team speared watermelons, another tracked live tango dancers with sensors. The competition was stiff.

Congrats to the following winners!

This means it won among votes from the entire audience of several hundred people.

However, Hoiio does show some promising differentiation, including its geographical focus. Hoiio has plenty of territory here in Asia to go after, while Twilio has its hands full, “getting hell from the US telcos and the European counterparts.”Hoiio offers an international API, while Twilio’s international API is in closed beta. Much of the business for these two companies entails negotiating gateways owned by the various telcos across different countries and governed by multiple legal frameworks.

The Hoiio team has flair, too. They were smooth and fun on stage, showed some very clean code on the stage screen, and promised that it has more up its sleeve.

In fact, we’ll be hearing from them soon in the U.S, because part of the People’s Choice award gives the winner a free spot at DEMO in Silicon Valley next month. As winner, Hoiio also collects $20,000 in services from Plug & Play, effectively offering Hoiio free office space in the SF Bay Area for several months. Not to mention a free Lenovo tablet, which the DEMO Gurus (see below) also got.

There were five winners of the DEMO Guru awards, decided by the DEMO production team, including myself (I’m executive producer of DEMO) and my DEMO Singapore partners.  They are the following:

Sofshell: The Sofshell padding system is a shock absorbent material used in personal protective wear against mechanical injury. The composite material is soft to touch, yet hardens upon impact, serving as a cushion for falls or other impacts. This was arguably the most entertaining demonstration of the day (see picture at top of this story). Team members showed how the pad could stop a metal rod from spearing a watermelon, and protect an iphone from being broken even when smashed from on top by a 12-pound bowling ball.

Dropmysite from Gilcrux: Dropmysite is a scheduled email backup in the cloud, which also provides email migration between cloud email providers and one view for all your backed up email. The demo was pretty cool, wowing the crowd by how quickly it worked.

Pixtelz — The company’s CuteChat allows video chat users to change their background images or videos real-time without a blue-green screen, thus providing the illusion that users are somewhere other than they really are. This was another crowd-pleaser, as the entrepreneur showed off how he could fake out his boss, or even his wife, by pretending to be in his office, while he was really out having fun. Users can also stylize their streaming video into cartoons, making it fun and cool. By cutting out the background, CuteChat says it reduces the bandwidth by a factor of three, thus providing less drop calls and screen freezes.

FlexiRoam — An easy-to-use mobile client that allows you to make and receive unlimited roaming calls while overseas for a flat rate per day. 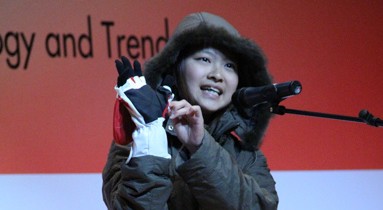 Fiett — This was the winner of the Alpha Pitch category of products. The company’s “Isgloves” product is a patent-pending, eco-friendly, touch sensitive gloves-mitten allowing people out in the cold for a period of time, like snowboarders, to use their touchscreen devices like their iPhones in the cold with precision and warmth. This demo also delighted the crowd, as the entrepreneur showed off a pretty rad looking mitten (see image left).

Congrats to all of the winners. In fact, congrats to all of the DEMO Asian companies. Now that they’ve made it this far, they all qualify to attend the U.S. DEMO (in fact, today is the last chance to apply for DEMO). We look forward to keeping up with their progress, and seeming them back stateside!

Oh, and below is a pretty map of the 14 countries where each of the 76 DEMO Asia companies came from.