A.I. is being incorporated in so many things, and we have seen how A.I. and chatbots will change startups. For those who claim their products are “A.I.-powered,” though, I must ask: Are they actually using A.I.? What are A.I. chatbots? Is Siri a chatbot? Will Viv use A.I. to book my flight tickets?

Well, this needs explaining. In my previous post, I tried to have a chat session with a few chatbots to see how they respond to random, unrelated questions. Artificial intelligence does not just mean a computer that can think like humans and learn things naturally. Artificial intelligence means a program with abilities to solve problems on its own. If you ask a normal computer to solve a problem and it’s not programmed to do that, it won’t do anything. You’ll see a much different response if you do the same thing with an A.I.-powered program. Having A.I. do all your work is still not possible yet, however; A.I. still needs the human touch to perform tasks at different levels.

When it comes to website building and chatbots, are they actually A.I.-powered? And even if they are, to what extent? Allow me to clear up this confusion and differentiate between an A.I. interface and an A.I. chatbot.

An A.I. interface is being incorporated by many startups for multiple tasks, as well as by many bots on Slack and Messenger. Let’s take an example of an A.I.-based website builder named Weps. This startup uses an A.I. interface to create a website with the help of their closed-ended chatbot that understands the replies and implements the necessary changes. Here’s a screenshot of a few closed-ended questions asked by Weps with very little A.I. being employed. It did not have a reply button, so I just had to choose from the options available there. 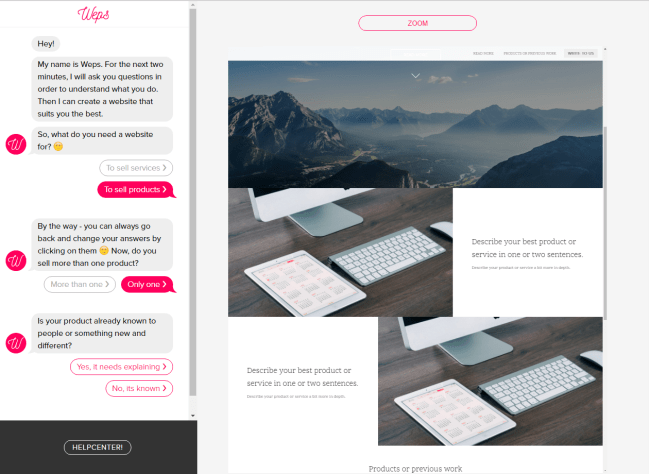 An intelligent interface pops up relevant suggestions in the form of buttons, but it’s not based in A.I.. However, it is more effective and efficient than a normal UI because of the code it’s based on and the intelligent strings attached to it. Usually, a UI features the computer side having decent knowledge of the domain and/or a model of the user.

These factors allow the interface to better understand the user’s needs and personalize or guide the interaction. Since this type of user interface just carries some aspect of artificial intelligence, it can’t match up to A.I.-powered chatbots.

There are two kinds of chatbots: scripted bots and A.I. bots. A scripted chatbot doesn’t carry even a glimpse of A.I., whereas A.I. bots are built on NLP and ML. They are based on the human capability of learning and absorbing information, but imbued with more efficiency.

These efficient machines can process 1,000 times faster than humans and will come up with more subtle results. A.I. chatbots (if they really use artificial intelligence) are superior to any A.I. interface. If we take a look at the convenience, the A.I. chatbots win here as well, because an interface just presents options. With an A.I. chatbot, you can type in your own answer.

With A.I. chatbots, there are many more possibilities. As we get more comfortable with them, they become even more useful. Bring on the superintelligence, right?

RightClick.io is a good example of an independent A.I. chatbot. It uses A.I. to create a website in a chat interface. The chatbot had its own intelligence to decipher the query and come up with answers according to its own intelligence. Here is a screenshot of its responses when I talked to its chatbot. I had options on the left of the screen along with the liberty of asking anything related to the website I was creating. There was real chat involved in it, and the chatbot was ready to use its A.I. rather than coming with a predefined set of instructions. 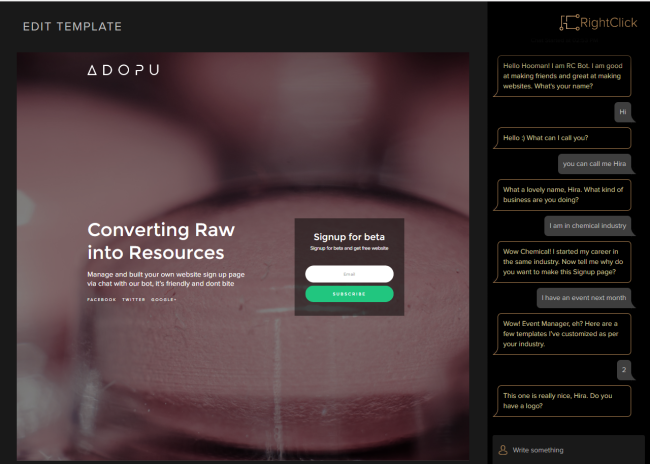