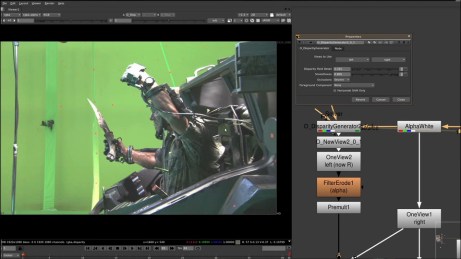 The Foundry makes digital visual effects software which has been used in motion pictures like Avatar (see left), District 9, Harry Potter and many others. The company just launched a new product called Storm at IBC, the International Broadcast Conference in Amsterdam.

Storm is a product for digital film-making which allows production staff to review what has been shot very rapidly, attach metadata, roughly edit and immediately start viewing some visual effects. None of this is possible when shooting on traditional film stock.

Making a movie involving digital visual effects is a complicated and technically sophisticated business.  In fact, the visual rendering farms used for movies like Happy Feet or Lord of the Rings rank among the top 500 supercomputing centers in the world. Each film sequence combining live action and visual effects involves a huge number of visual elements which must be integrated into a final, polished product. The Foundry’s software creates rough combinations of these elements (a process called compositing) in a visual representation which can then be refined by dozens of artists. The video below shows some work created using Nuke, the Foundry’s core compositing product.

I spoke to The Foundry’s Chief Scientist, Simon Robinson (recently selected as one of Fast Company’s 100 most creative people in business), about trends in film-making and visual effects. One of the biggest trends Robinson sees is shooting in stereoscopic 3D. This is where a 3D camera system, like the one used on Avatar,  is used to record the images from two perspectives. The effects software therefore has to a process dual stream of images and combine them into the final 3D viewing experience. Another trend is shooting entire movies on digital film stock and in HD (high definition), again creating even more material to be tracked, and requiring a new type of production workflow.

The Foundry is based in London, which is one of the world’s biggest hubs for movie post-production. It was founded in 1996, has 80 employees and $3 million in a first round of funding.