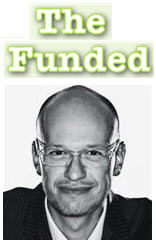 Last night, the founder of the TheFunded, the controversial VC-rating site, held a coming-out-of-the-closet event at Stanford University.

We pointed to a Wired story last night, which first revealed the founder is Adeo Ressi. That article recounts how and why Ressi launched the site. But only in seeing and listening to Ressi talk before a crowd of between 60 and 70 people did I appreciate the richness of contradictions and controversy of this man and his site.

In working the room last night talking with attendees — many of them well-known Silicon Valley entrepreneurs and investors — I heard two polar views. Some people derided the site, saying the anonymous comment system opens it up to abuse and hate-mongering, while others admire it, saying it is profoundly good for entrepreneurs who often know very little about the people they take cash from — despite the fact they may work with VC for years after taking the investment.

There were also those like me, who were conflicted, seeing both.

The man has estranged himself from many VCs, who are disgusted by what he has done, and yet he was surrounded by friends in the room last night: Phil Kaplan, of Adbrite, who also started FuckedCompany.com, and who admitted to me that he’d provided some advice to Ressi in the early days of TheFunded; Elon Musk, a co-founder of PayPal, who was a housemate at the Univ. of Pennsylvania, and who threw Ressi’s bachelor party; and George Zachary, a partner at Charles River Ventures. Serial entrepreneur Jason Calacanis, who wasn’t there last night, is also a friend.

Here are some notes, summarizing the contradictions:

1.) Ressi is clearly upset about how he was treated by VCs at his venture (read how some pulled out of his last company, while others engineered his ouster). On stage, blurted out how he’ll never take money from VCs, and singled out Matrix Partners as a firm he’ll avoid. Yet a few moments earlier, with all seriousness, he’d explained that he started the company with “no ax to grind” and designed it solely to help entrepreneurs. He speaks convincingly about the need to remove the asymmetry of power between VCs and entrepreneurship, and about the surprising void of data about VCs, forcing entrepreneurs to rely on hearsay. At one moment you think he’s a cynic, but the next, you can see he is dead serious and passionate: He implores VCs to learn two basic lessons, and if they do, he assures them they’ll get good ratings by members: 1) Say “no” to entrepreneurs quickly, to avoid stringing them along, and 2) keep their confidence; don’t spread confidential information. These are obvious things, but too frequently abused, he said.

2) Ressi said that he follows a policy of not editing member submissions, so that he can stay within bounds of the Communication Decency Act — i.e., so that the members making the submissions are responsible for their comments, and not his site. However, moments later he says he has chosen to delete some submissions because they are clearly wrong or malicious, and admitting that this goes against his own policy, he says. One the one hand, we’d like to cut him some slack here. However, from other remarks about VCs during the evening, Ressi displays a hint of flippancy that makes you question his role as a neutral arbiter. If he really dislikes Matrix, for example, and there’s no oversight of his behavior (he admits he’s the only one running the show), how do we know Matrix’s rating isn’t meddled with? Matrix is rated by his site at a 3 out of 5, which is quite low.

3) Here’s the promising side: Ressi has gone to a tremendous amount of work on this site to keep his promise to ensure anonymity and to avoid lies and errors. During a demo of his site’s back end, he showed how member names within his system are represented by numbers. If he is subpoenaed, anonymity can be upheld. His dashboard of member activities lets him track comments, and alerts him if they are engaged in repeated suspicious activity. His system send the offenders warnings, and he’ll delete members who don’t stop. He’ll triangulate several sources, to makes sure members submitting comments are who they say they are: He requires an email address, checks their work web site, google’s them, checks their LinkedIn profile — all part of an effort to stop VCs trying to sneak in under a different name. He’ll reject submissions by members that rate VCs with “5” (the top mark) in every one of the five categories, assuming that such a rating is dishonest. Similarly, he’ll reject submissions with all “1”s for ratings. He has other features in the pipeline. He’s far more more competent and ambious than we realized when we first started writing about this company. Here’s the worrying side: Despite all these efforts, there’s really nothing to stop a VC from getting his entrepreneur friends to submit positive reviews to game the system. And the rating system is misleading. For example, the top-rated VC overall on the site is Kepha Partners, with a rating of 4.4. However, Kepha is run by a single person with a year-old firm that hasn’t shown any exits, according to Dan Primack, a reporter who asked Ressi about this last night. The second highest ranking VC, Draper Richards, is run by Howard Hartenbaum, who freely admits he contacted entrepreneurs he’d funded to submit ratings. Sequoia Capital‘s rating, meanwhile, is down at a 3.9, despite its very impressive track record (Roelof Botha, the young partner at Sequoia, early backer of YouTube, attended the event). Ressi says the rating reflects an entrepreneur’s experience with the firm, and that performance is only one part of that. However, Primack made the point that its easy for a VC to get good marks by being friendly, but the VC may do a better job by being a hardass, a guy who prods with entrepreneur, sometimes with unpleasant persistence, to get the job done.

Another note: Ressi says he’s not making money. He has about 150 subscribers, paying about $250 a year. The rest of his members — totaling 3,480 — aren’t paying anything. All but 200 members are CEOs.

[Disclosure: VentureBeat has a relationship with TheFunded, which includes cross-linking to each other’s sites]