The Girl and the Robot doesn’t try to wow you with features or complicated mechanics or frilly, detailed graphic design.

Instead, this indie third-person game wraps puzzles, platforming, action, and adventure into a quiet, charming package, wooing you with a gentle approach and sunlit graphics. You play a young girl trapped in a castle and her robot protector, switching between them at will to fight and solve your way to freedom.

After a successful $38,000 Kickstarter in 2013 (more than doubling its $15,000 ask), The Girl and the Robot is now out for $10 on Steam for PC, Mac and Linux and is scheduled for release later this year on PlayStation 4 and Wii U. Flying Carpets, based in Montreal, did the developing. 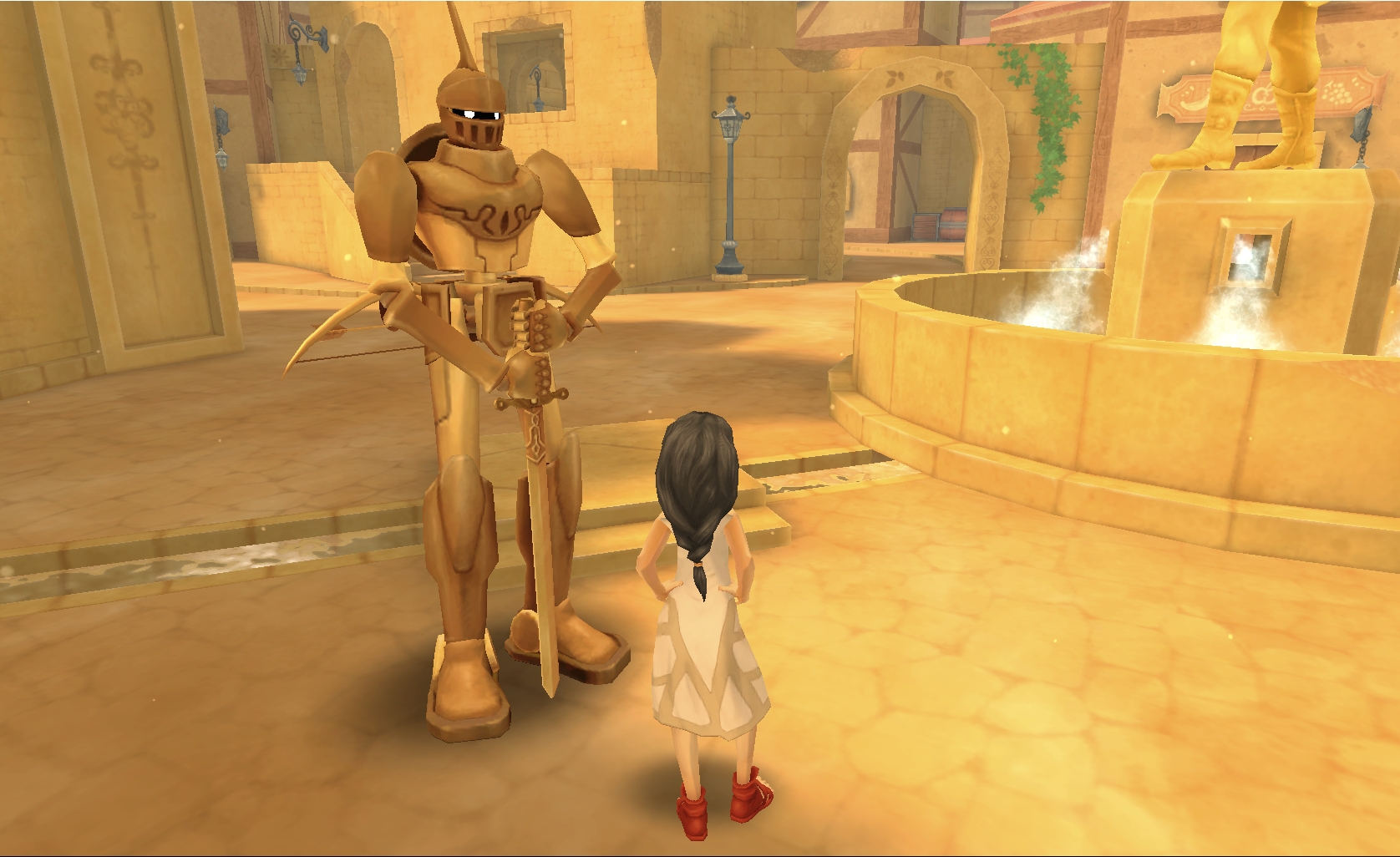 Above: Well then, Mr. Robot, what shall we do now?

You start TGATR by playing the girl, though you quickly find the amulet that serves to control the robot. She’s simply drawn, moves lightly, and looks downright endearing in the meditational pose she assumes when you’re controlling the robot. She’s held captive in a castle by an evil queen, freed to wander its halls by an old man whose bird she innocently helps.

The giant golden robot is attractive, attentive and protective. When you play the girl, the robot’s visor follows you, always watching. His animations are heavy and deliberate. Their relationship evokes traditional fairy tales, rather than modern strong female characters, but feels appropriate and intriguing.

The girl can’t fight at all — the game ends if you’re caught — but can squeeze through small spaces and hop over gaps. The robot can fight, but can’t do either of those things. Together, they make a powerful team and an adorable one. When you want to move them together, the robot picks the girl up and plops her gently on his shoulder. 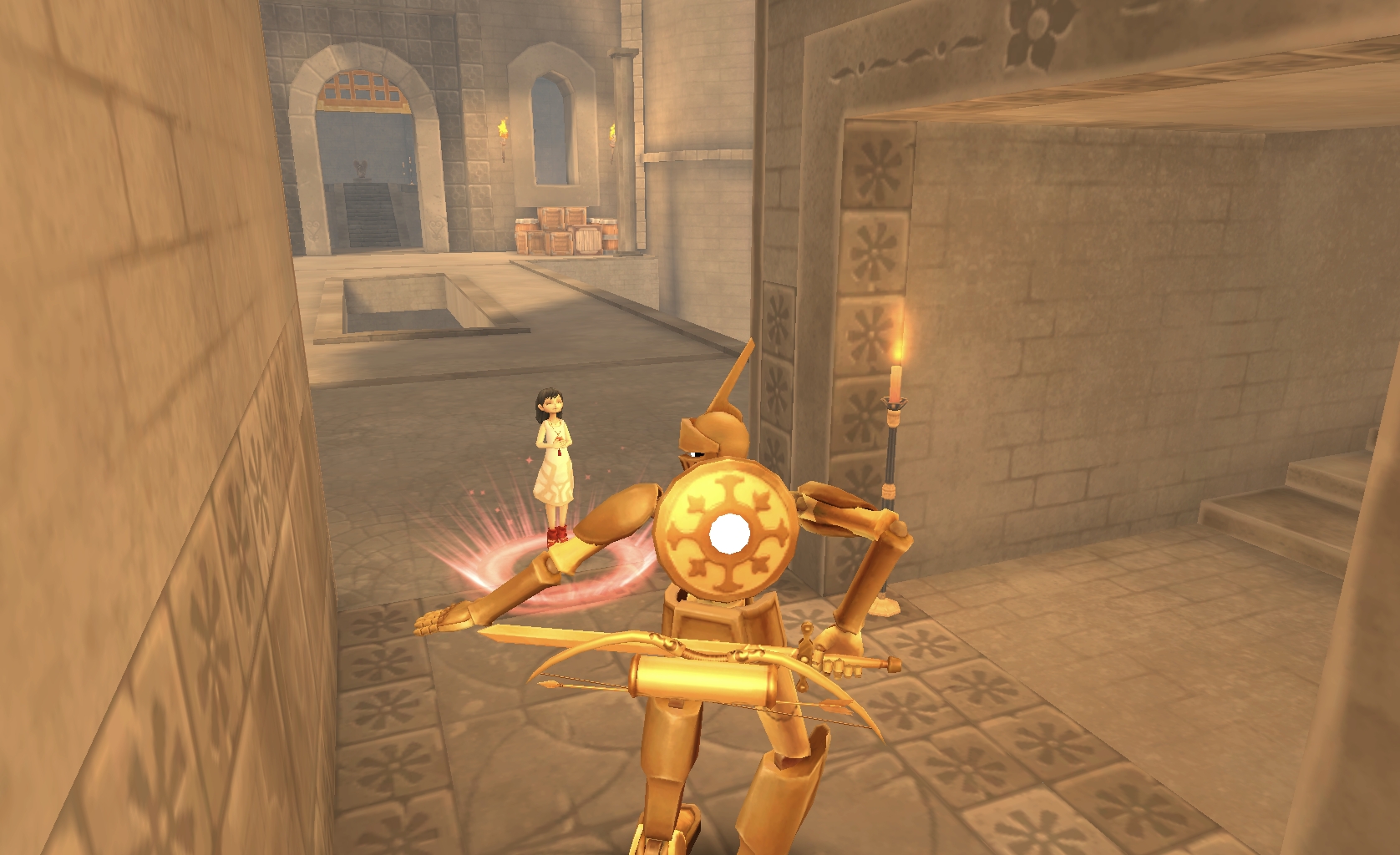 Above: Robot in motion, girl on standby.

The game’s developers say they were inspired by Ico, a similar escape-from-the-castle-and-its-evil-queen adventure created by Japanese developers for the PlayStation 2. That game used “subtracting design:” an approach that removed everything not necessary to create the setting, gameplay, and story.

That influence, along with the developers’ love of Studio Ghibli films’ aesthetic and a hefty dash of Zelda, shows up in the game’s look, gameplay and action.

To begin with, you won’t hear any dialogue. The game’s sound tracks, though beautiful, are short and only play intermittently. Sound effects are spartan, though well-matched to the action. All the characters (other than enemy robots) can be counted on a single hand. The robot can walk, jog, shoot arrows, swing a sword, block attacks, and carry the girl. The girl can walk, run, jump, heal the robot, and push the occasional button. 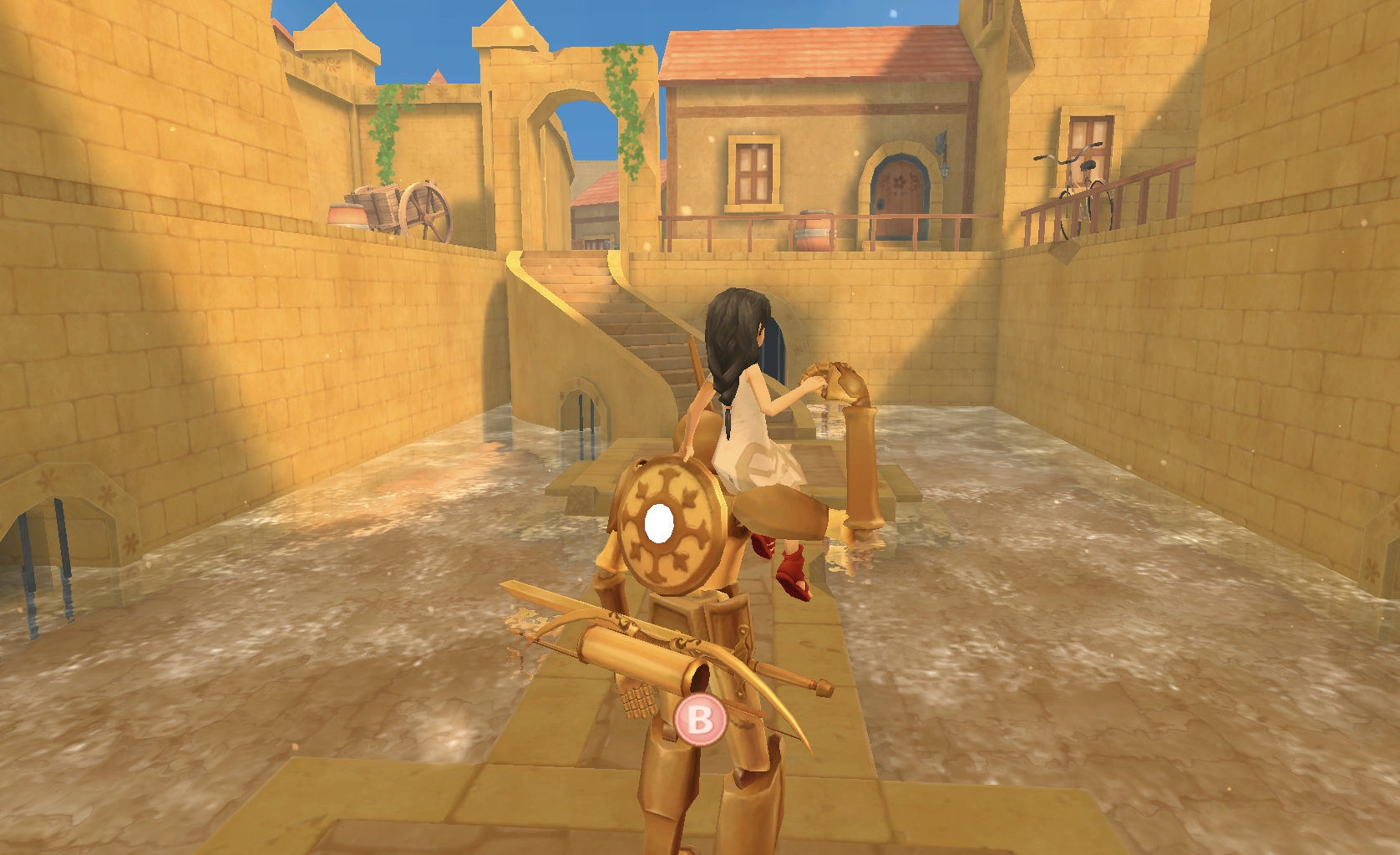 The graphics liberally reuse textures, and give the entire game a sunwashed yellow feel, with the occasional sprinkling of sun motes to add to the aesthetic. Overall, objects and characters display fewer details than Ico did for PS2 back in 2001.

And yet, the result is thoroughly engaging.

Because the robot moves and attacks slowly, combat requires planning and strategy. Almost all the puzzles require the girl and the robot to work together, performing a complex dance that can sometimes require dozens of steps to open the next door or the next gate.

The game does a lovely job of imparting meaning to every aspect of its design. The thoughtfulness on display helps create a pensive mood for the gamer as you work your way through the puzzles and the castle, keeping the girl safe and the robot moving. 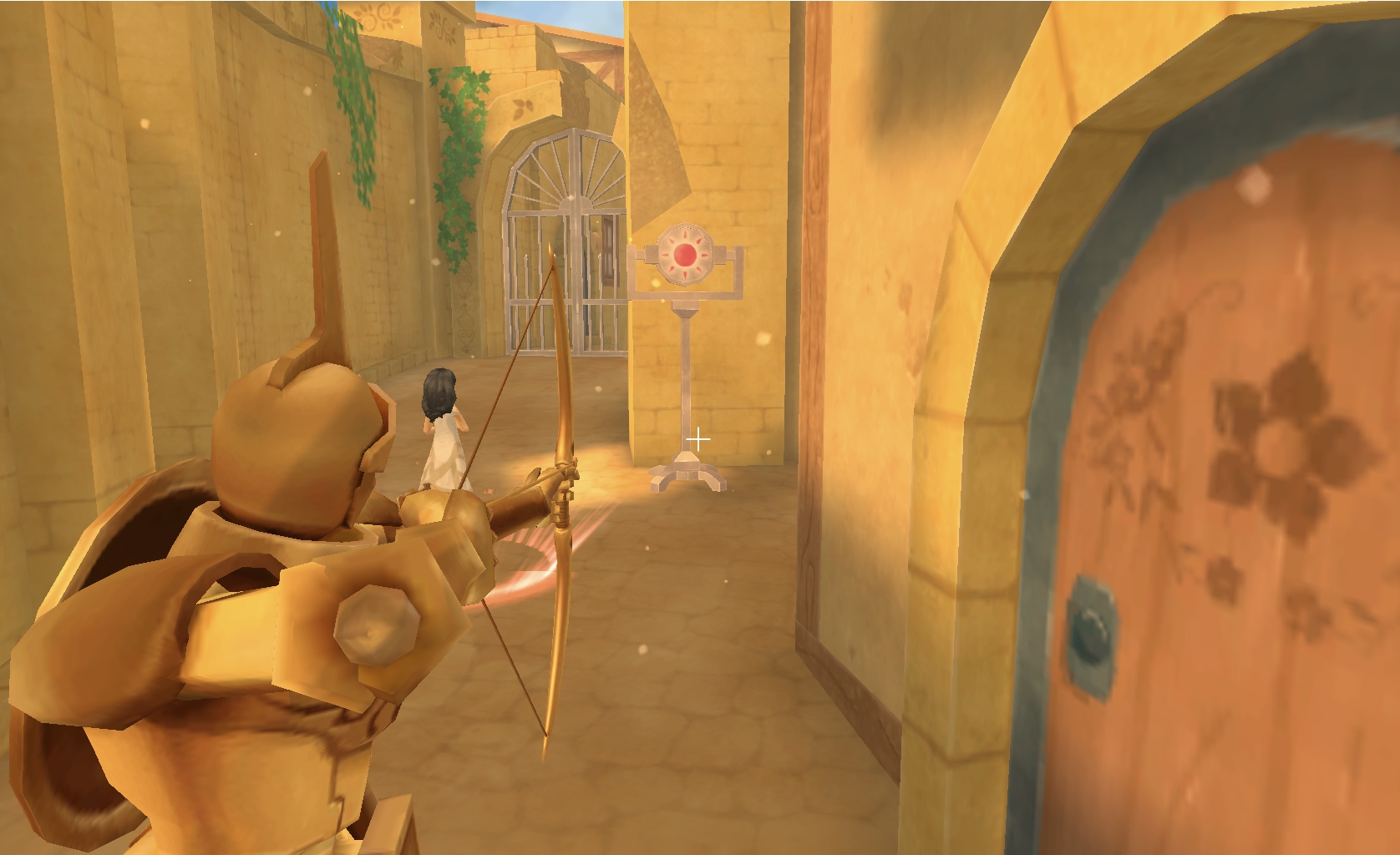 Above: That sign controls a door, and can only be triggered by bow and arrow. This castle seems impractical. No wonder almost no one lives here.

Many of the brainteasers boil down to that collaboration between girl and machine, using the strengths (and in some cases, the weaknesses) of each to make joint progress. At times, you’ll be playing one or the other for quite a while. That can be dangerous, considering the girl’s inability to fight back against enemy robots and the game’s infrequent save points.

In some ways, puzzles are some of the hardest gameplay elements to balance correctly. They have to be easy enough to solve while being hard enough to make the gamer feel intelligent for solving them.

The difficulty ramps up, though not always evenly, in TGATR. I appreciated the environmental cues for some puzzles, which offered subtle clues that provided hints when you got stuck and wandered around an area for a while.

Overall, the balance is pleasant: The Girl and the Robot isn’t a hard game, but the puzzles will make you feel like you had to exert your brain a bit, and they help at every turn to reinforce the relationship between the unlikely pair. 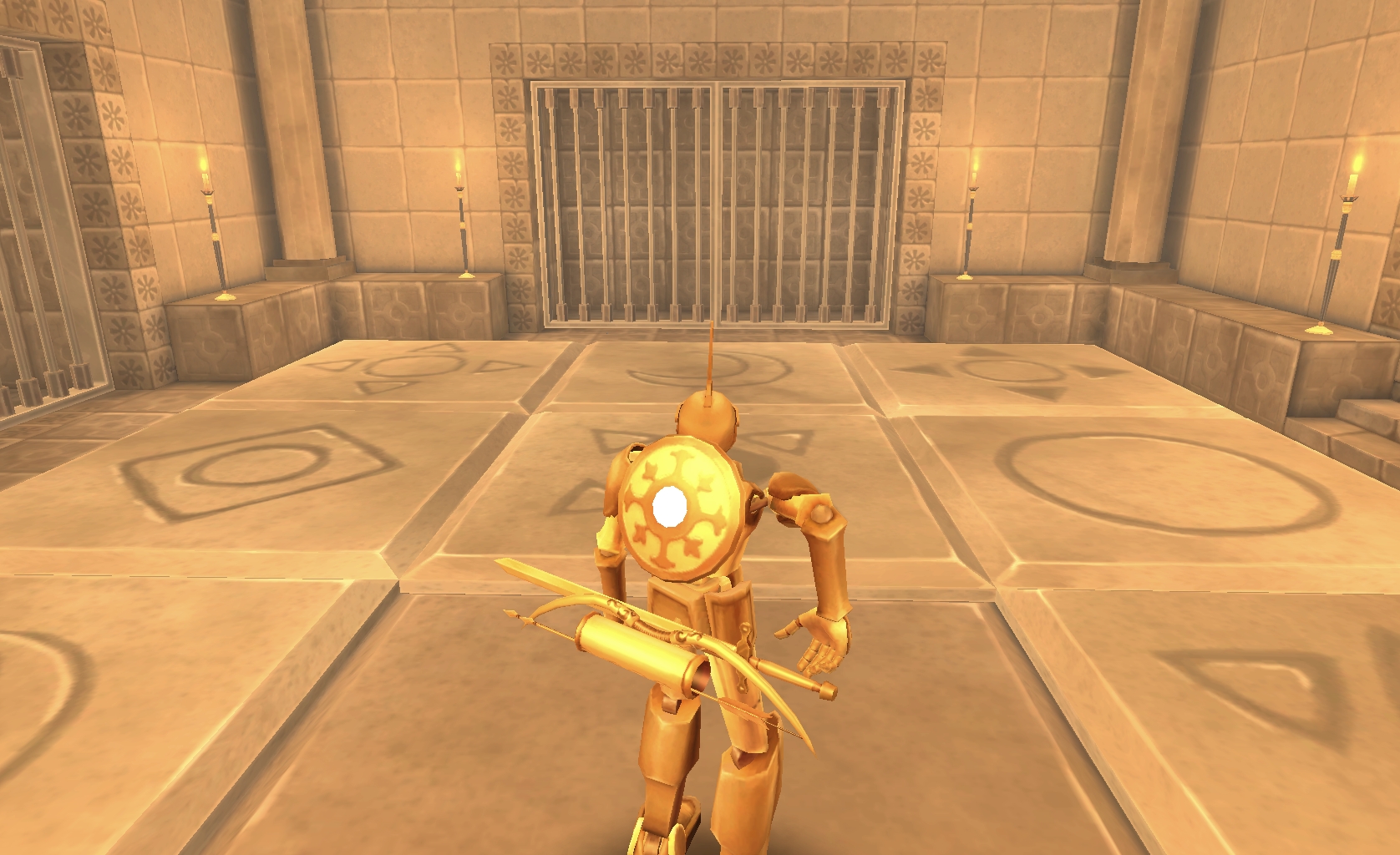 Above: Heyyy… I think I saw those shapes in another room.

I played the game on two separate machines. On one, a MacBook Pro, I experienced a couple of minor issues (one positioning glitch, one graphical) and no major problems. But when I switched to the other… that’s when the problems started.

To be fair, the second machine, while my main rig, offers a unique environment for a small game. I have several VR units installed, presenting the appearance of about three dozen input devices. I run a standard Windows 10 OS but typically run games in a window to take notes at the same time.

On that machine, TGATR insisted that I had a controller, though Windows corroborated that none was installed. Worse, I couldn’t force the game to fully switch to keyboard-and-mouse mode. I limped along with memorized keyboard controls and by avoiding certain menus I’d never be able to leave. My setup is fairly unique, and the game’s developer says this issue is rare, though I did note at least one other player having similar issues.

I replayed areas I had already completed (creating a new game) on the PC — only this time, it was much faster, because no robot enemies ever spawned. Ever. Hmm.

None of these issues cropped up on the laptop. I was still able to cheese past the first evil robot, by running the little girl around and around a hole in the floor until he fell through, instead of climbing through a window to escape. I missed a key cutscene as a result. But I’m going to call that a feature, since the “fight” proved awfully amusing. 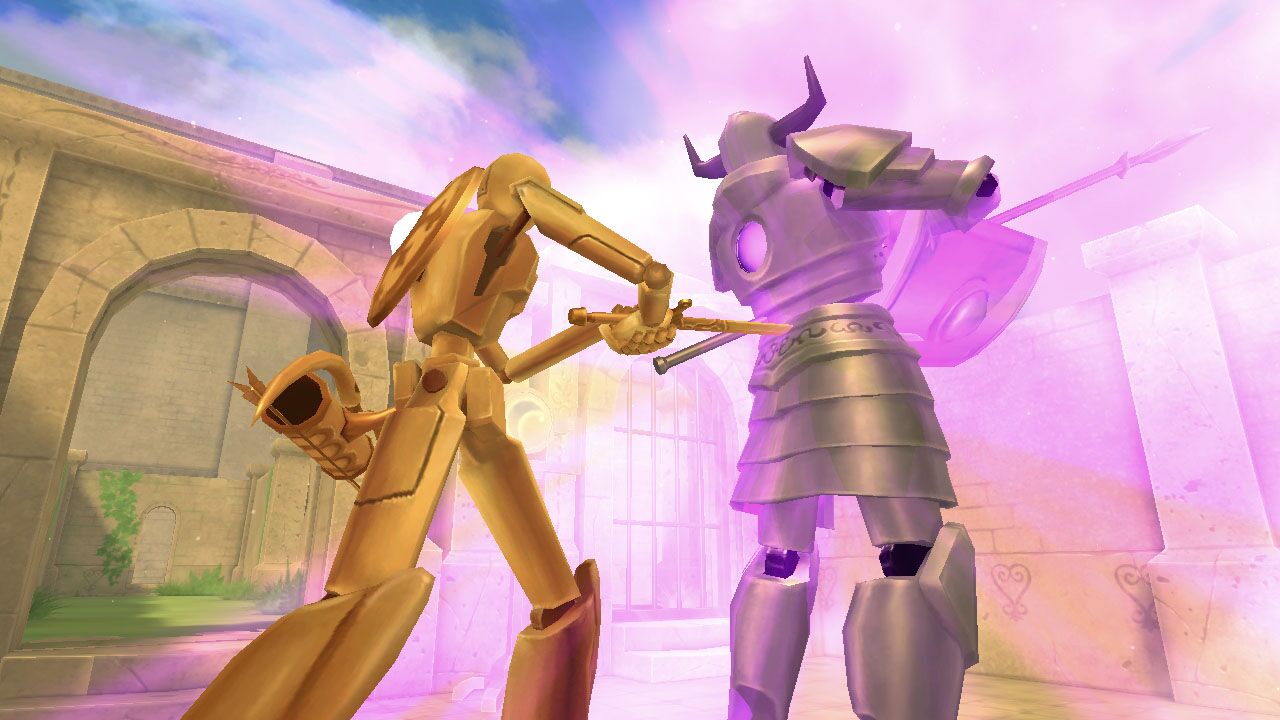 Above: Strategic combat: (sometimes) a feature of The Girl and the Robot.

The Girl and the Robot is a short game: It took me about six hours, and that included some detective work to resolve the controller issue. While that isn’t much in today’s No-Man’s-Sky marketplace of inifinite-play games, it feels roughly appropriate for the price tag.

TGATR doesn’t seem like an incomplete version of a larger game. Its tight focus, small environments and simplicity feel natural, and while I suspect many were the result of indie design time and money constraints, nothing seems to be missing. 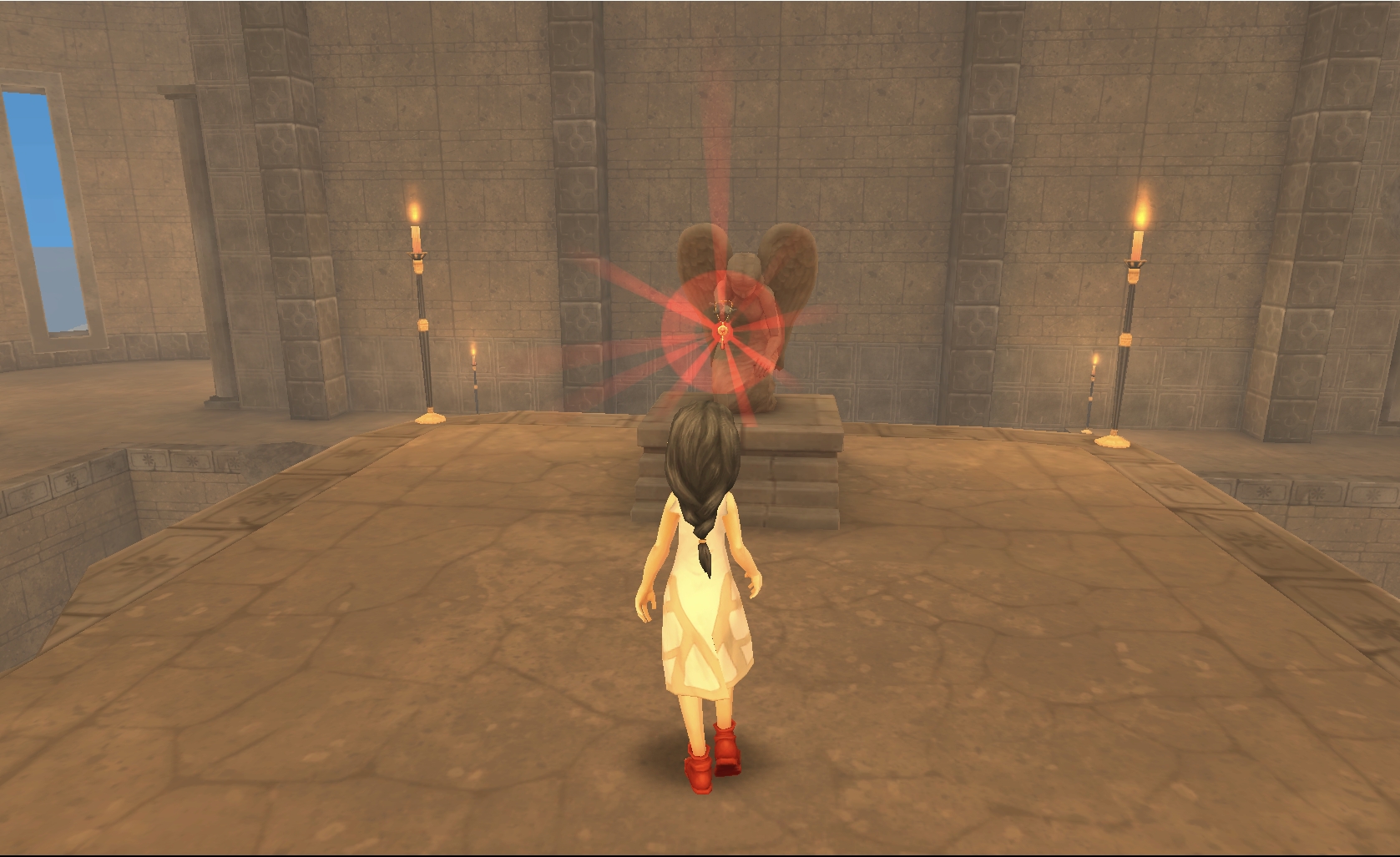 Above: Step 1: Collect locket. Step 2: Knock around a castle with a giant metal protector.

The Girl and the Robot is a truly family-friendly, engaging, simple story about the relationship between a little girl and her protector, both trapped and attempting to find freedom. While it offers very limited features, reused and simple graphics, and a nearly nonexistent score, the overall aesthetic proves consistently charming.

Puzzles and combat both require just enough brain crunching to feel rewarding. We experienced a few glitches that you may never see, and it ends a little swiftly. But TGATR’s entertainment value definitely earns that $10 price tag.

The Girl and the Robot is on Steam for PC, Mac, and Linux for $10. The developers provided a download code to GamesBeat for the purpose of this review.