We’ll soon be saying sayonara to the CMO role we used to know.

Marketing has a problem nowadays: It’s too confusing. Too many technology solutions for too many acquisition channels generating too many data points, with every one of them changing faster than ever, and by the time you learn what’s new, the rules have changed again. It’s just too many moving parts, yet marketing is more important than it’s ever been.

In an overcrowded, hyper-saturated, and extremely noisy world, you need marketing to help you to stand out from your competitors. Or you’re dead.

You can’t look at marketing with the same mindset we used to look at it 10 years ago. Back then, the iPhone didn’t exist, Twitter didn’t exist, and Facebook was a tiny little 18-month-old company that had just raised a bit more than $10 million. It was a very different world.

Since then, we’ve seen colossal changes. And where we are now is drastically different not only from where we were, but also from where a lot of experts thought we would be.

1. Thanks to the Internet,  markets are the biggest and the most accessible ever. Unless you’ve been living under a rock, by now you’ll have heard that:

a) There are 10 times more online consumers compared to 15 years ago, up to 2.9 billion from 280 million

b) Of the 5.2 billion mobile phones users worldwide today, 40 percent (2 billion) are on smartphones enabled for payments.

The Internet and smartphones are the two technologies with the fastest adoption ever in the history of humanity, and two billion more people are projected to come online in the next 10 years. So what does this mean? It means that the challenge today really isn’t about struggling to reach more customers (after all, they’re easily accessible); instead, it’s about making them care. Magic happens when you do. This is called the attention economy. 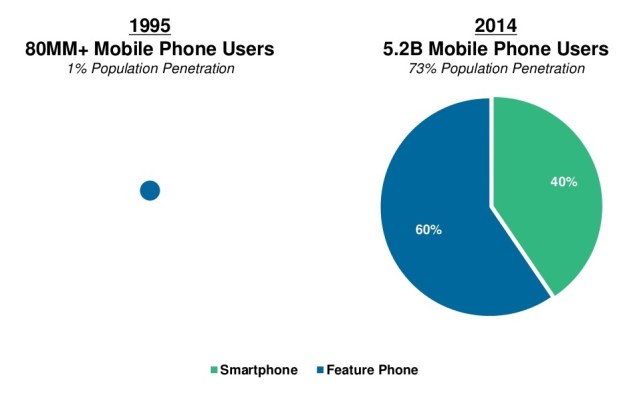 That’s why marketing today has the biggest leverage ever. And it wouldn’t be a stretch to say (paraphrasing Marc Andreessen) that marketing is eating sales, while sales is becoming more and more post-sales: up-selling and cross-selling. That’s the case not only because of how social media has changed the game, but also because millennials really value things differently than the previous generations (see the below image of research provided by Boston Consulting Group). 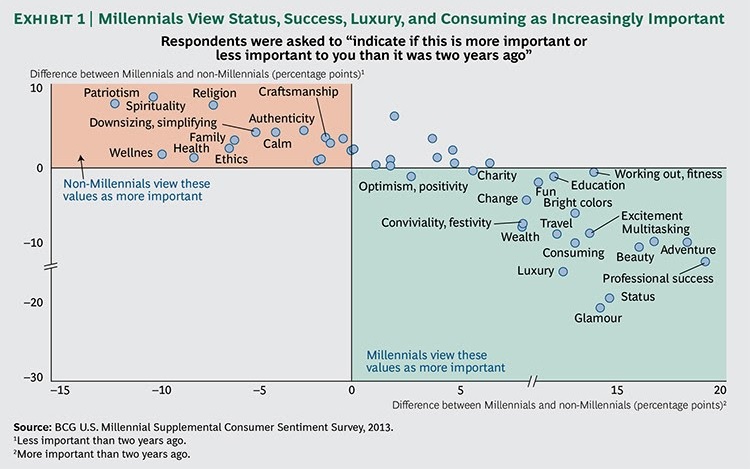 3. There are also more, not fewer, Ad/MarTech companies than ever. Lots of industry experts, looking at the  marketing technology landscape, predicted 10 years ago that the ecosystem was too fragmented and that the vast majority of companies would either die or consolidate.

Not only did the vast majority of them not die or consolidate, but the landscape as a whole practically doubled in size, going from 947 companies in January 2014 to 1,847 in January 2015. You can find the research at this link and a very busy picture below (pro tip: get a magnifying glass).

What Marketing Companies are Realizing

Since the predictions for what marketing would look like today were so wrong, the plans and organizational structures that were put in place for the future aren’t as productive of efficient as everyone had expected. So we’re now seeing marketing tech companies make a lot of changes in order to adapt to the current reality.

1. It’s nearly impossible to consolidate all the fragmentation in the market. The most sophisticated analysts expect the third wave of consolidation to happen, but that doesn’t seem to be on the way (yet?). Sure, some consolidation will happen, but there just aren’t enough buyers in the market to meaningfully consolidate such a fragmented ecosystem, so the vast majority of marketing tech companies will remain independent, and they will not die. At least, not the two or three best-in-class of each category.

This is true because the consumer markets are the biggest and most accessible ever and because we’re seeing the highest number ever of businesses online. Previously, only enterprises, corporations, and big brands had an online footprint. Now SMEs and SMBs are gaining foothold and traction, too.

2. The best marketing tech companies are verticalizing and specializing. This is counterintuitive. Ten years ago marketing technology companies grew by adding product after product to expand their reach within the whole marketing stack; today, this doesn’t seems to be the case. Businesses are questioning why the best-in-class of a category should move into another crowded category to be one of many sub-optimal solutions there.

Why dedicate time, capital, and effort to a second product that may unfocus and damage the brand?  Many of today’s best-in-class companies focus on a single-purpose approach for a very specific customer, building ancillary tools/services instead as a way to drive traffic and sales to the main product, sometimes even giving these “add-ons” away for free, strengthening their position as a result.

Think Disney with Star Wars and Pixar and Marvel. Consolidation is happening, but in a way that allows companies and brands to stay unique and separate even in the midst of the consolidation. This is very different compared to what was happening a few years ago.

The Opportunity for New CMOs

When the marketing world as we know it changes and undergoes an overhaul, it only makes sense that the role of the CMO — the person in charge of all the marketing efforts — will see some major changes, too.

New CMOs will have different responsibilities and priorities, to the point where they will almost be taking on a new identity. There are three big changes that are happening in the role of the CMO.

1.  Brands are changing their tactics. They don’t learn anything in depth; they optimize for speed instead. Here’s the kicker. Millennials don’t know anything anymore, except where to find what they need when they need it. Google did that to us, and it’s now happening to marketing, too. The process of learning something is too slow, and while you’ve been doing it, the rules of the game will have changed again. It’s just not worth it.

So how do you keep up? By outsourcing the cost of learning and of staying current, focusing on results instead. This means that all the technical, complex practices are often best left to the best-in-class technology solutions available today. Instead of trying to keep up with an always-changing Internet and its rules, new CMOs optimize their time directly managing how much they’re spending across different channels.

Focus on the results: cash in versus cash out, top of the funnel versus bottom of the funnel. This will allow CMOs to optimize marketing efforts instead of struggling to keep up.

2. Specialized technology solutions are increasingly becoming Brands’ new VPs. Think about it: 10 years ago you’d hire marketing specialists on Search, Email, Display, Paid. Today? At the current growth rate, my company is going to process 1 percent of the entire global Facebook Advertising Budget within the next 6–8 months, which clocks in at around $15 million per month. What VP of Social Ads manages that much budget? The same thing is true for MailChimp: They send out 600 million emails per day; what VP of Email Marketing could even imagine managing and distributing that many emails?

These kinds of third-party solutions will be your new VP of Facebook Ads and your new VP of Email  Marketing, etc. The same holds true for SEO, Video, Content, Mobile, Referral, Loyalty, etc. There are plenty of great specialized solutions out there that will take care of the technology side of things, taking responsibilities away from VPs and CMOs and fielding them to a much more effective platform. CMOs will now choose and monitor software instead of VPs.

3. Brands are building their own personal marketing technology stack. Ten years ago you’d buy your whole marketing stack from a single big company like Salesforce or Oracle. This would come with the advantage of having a variety of marketing services integrated into the solution, but with the disadvantage of locking you in for years.

Nowadays, how do you recognize great CMOs? You look at how much agility they show in composing their personal marketing stack by putting together different companies, each one hopefully being best-in-class for the category and a great fit for the company; and you look at how well they are making the stack work together. You still get integration, even if it’s between different companies, but on top of that you also get focus and flexibility.

Kyle York, one of the most forward-looking CMOs in the industry, currently at Dyn (a cloud-based Internet performance company) said: “The game has changed compared to 10 years ago; we ourselves have at least a dozen different tools in our marketing stack. It’s a big fat win if you know how to play by these new rules.”

Playing by the new rules just means adapting to the reality of marketing we live in, instead of clinging to outdated approaches designed for a completely different world. When brands say “sayonara” to the old ways and embrace the new roles and identities of their CMOs and marketing departments, they will be much better equipped to scale, grow, and progress.