The startup landscape can be a double-edged sword in the business world: either the company is going to disrupt the entire landscape or it’s going to inspire. But what seems to have corporations terrified is how to wrap their heads around the impact startups are having on the traditional model. Is internal research and development enough? Or is outside assistance needed? And just where should these corporations start?

These questions are at the center of a new report from Capgemini and Altimeter Group entitled The Innovation Game: Why and How Businesses are Investing in Innovation Centers that’s available today. Written by Altimeter’s principal analyst Brian Solis, this 18-page report explores why it’s important for companies to innovate now and how they can do it.

“To compete for the future of business takes more than R&D,” Solis tells VentureBeat in an email. “Innovation represents an intentional act of partnering with new people and companies that offer new insights, expertise, and capabilities. … It also represents the importance of looking outside traditional business models to establish a footprint in communities where the sole purpose of being is trying and inventing new products and markets.” 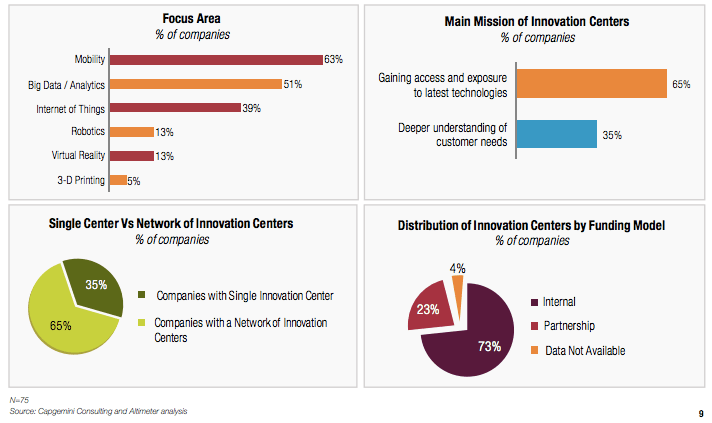 This report indicates that 90 percent of companies surveyed believe that they are too slow to market and often go over budget. It asserts that traditional approaches to innovation aren’t able to keep pace with the growing digital transformation taking place.

Solis shares that in 2014, it was estimated that companies spent around $1.6 trillion on R&D globally. However, only 5 percent of the R&D staff felt “highly motivated” to lead innovation. Companies need to look elsewhere in order to survive — since 2000, 52 percent of Fortune 500 companies have merged, been acquired, or gone bankrupt.

In Silicon Valley, corporations have established a beachhead to make their presence known, including Target, Ford, Samsung, Verizon, AT&T, Orange (disclosure: I used to work there), McDonald’s, Wal-Mart, and General Electric. All are eager to not only tap into the area’s talent pool, but also to learn about what and where the next technological innovation will be. 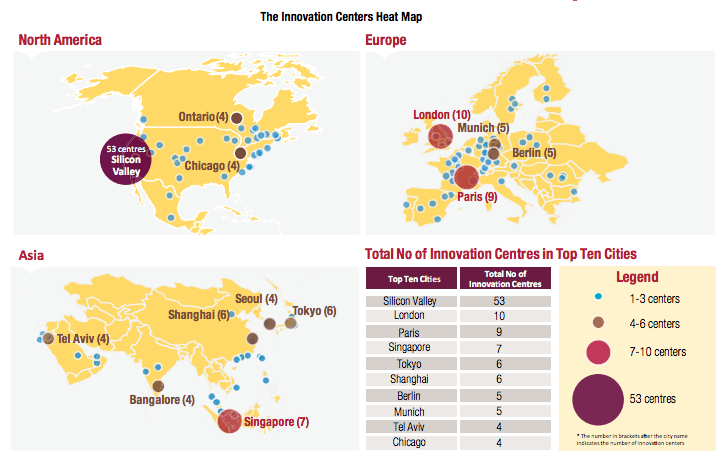 Above: Heat map identifying where the most corporations established innovation centers

And it’s not just limited to the San Francisco Bay Area — the report looks at hundreds of companies to find out where their innovation centers are. Many are indeed located in Silicon Valley (53), but the other top spots are London (10), Paris (9), and Singapore (7).

Solis’s report defines an innovation center as a place where corporations can accelerate the speed of innovation, provide a fresh source of ideas, enhance risk-taking ability, attract talent, drive employee engagement, and build a culture of innovation. Think of it as a lab where companies can safely experiment and engage its people in discovering the next breakthrough product. 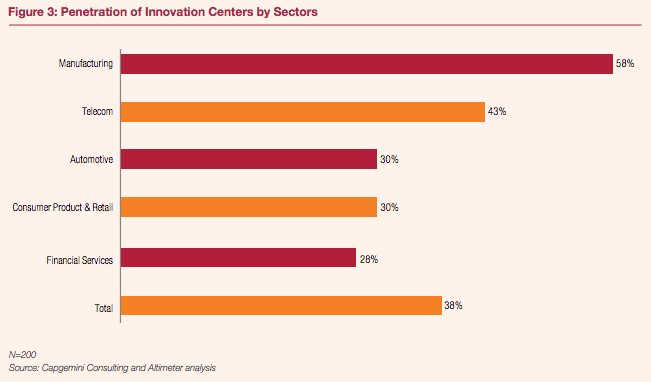 The high-tech manufacturing segment is making the biggest bet on innovation, according to the report. This is notable as it’s related to advancements in the Internet of Things, the Maker movement, and 3D printing.

Telecommunications has the second highest penetration rate, which shouldn’t be surprising, as companies like AT&T, Verizon, T-Mobile, Orange, Deutsche Telekom, and others are all looking to better understand the dominance of applications like Facebook (and its WhatsApp messaging app), Google’s Android operating system, everything Apple is doing, the latest in advertising, and anything else that people do with their mobile devices and Internet access.

In some cases, corporations are probably not interested in doing more than interacting with startups and fostering relationships, perhaps opening the doors to strategic investments or acquisition. Examples of this include the Walt Disney Company and Nike’s partnership with the Techstars accelerator and also Orange’s “Fab Force” program.

Easy to fail. Tough to succeed.

If you’re a corporation looking to set up your own innovation center, is there a formula you should follow? The report quotes a senior executive at a leading global bank: “About 80 to 90 percent of innovation centers fail and end up being a massive waste of resources.” 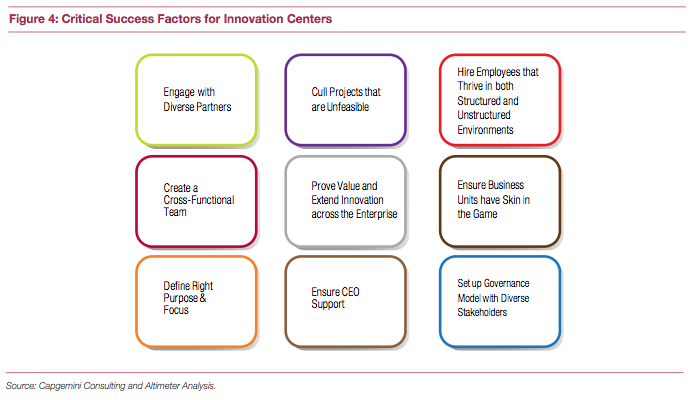 Solis identified nine factors to improve the chances of an innovation center’s success:

Keeping ahead of the competition and trends is important for any corporation, but it’s tough. Most industries weren’t prepared for the impact of companies like WhatsApp, Uber, Twitter, Google’s Android operating system, and many other technologies. And while some have opted to consolidate with competitors in order to remain relevant, others seek to adapt to the situation.

This “adapt or die” mentality is something Solis has been promoting for a while, both in his reports and also in the books he’s authored. He seeks to help businesses weather the digital transformation disruption taking place and warns those still living in the past that they may go the way of RadioShack, Borders, Blockbuster, Circuit City, and others.

“Reacting and adapting are not good enough anymore,” Solis says. “To stay ahead of disruption, the rallying cry is now, ‘innovate or die’.”