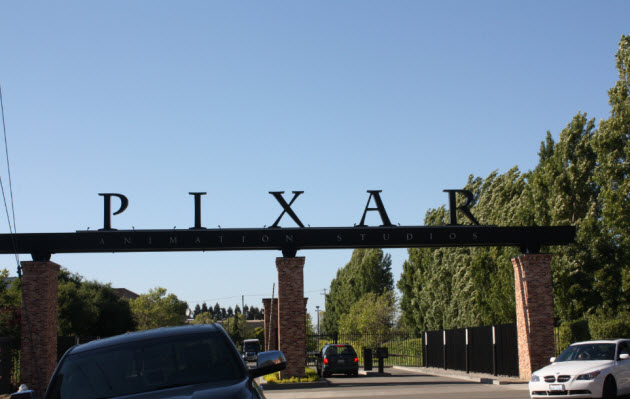 Pixar Animation Studios opened its doors to the press today as parent company Disney took the wraps off its Toy Story 3 video game, which is due to debut on June 18 alongside the third movie in the animated series. I took advantage of the rare look inside the studio, which is a creative maelstrom. This is one of those magical places that the public doesn’t usually get to see; but every once in a while Pixar opens its kimono.

The company, started by George Lucas, bought by Steve Jobs, and inspired to greatness by John Lasseter, has had 11 major animated hits in its lifetime. That’s an incredible perfect record, and, as a result, the company has built a cool headquarters in Emeryville, Calif., that reflects its creativity. Today, we got to see scenes from Toy Story 3 and we checked out the game too. The following photo gallery is an inside-out look at Pixar. 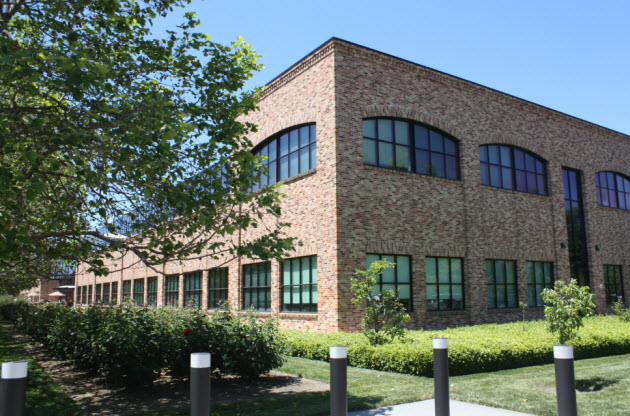 On the outside, the building looks pretty ordinary. But the place has lots of greenery. 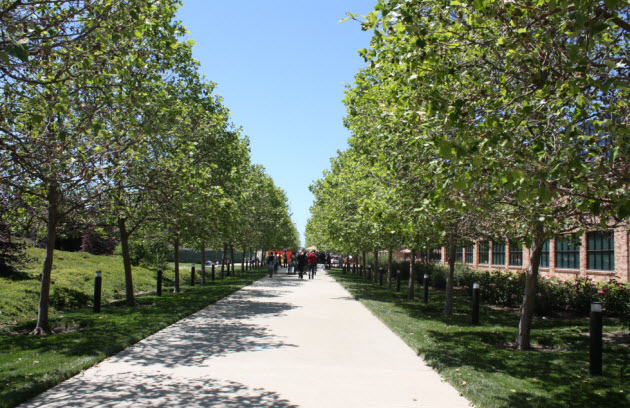 The pathway to the main entrance is lined with trees. At the end of the line, we had to check in all of our electronic devices. Guards scanned us as if we were in an airport. We couldn’t take anything electronic into the screening. I missed my BlackBerry. The company takes no chances when it shows snippets from its upcoming movie releases. 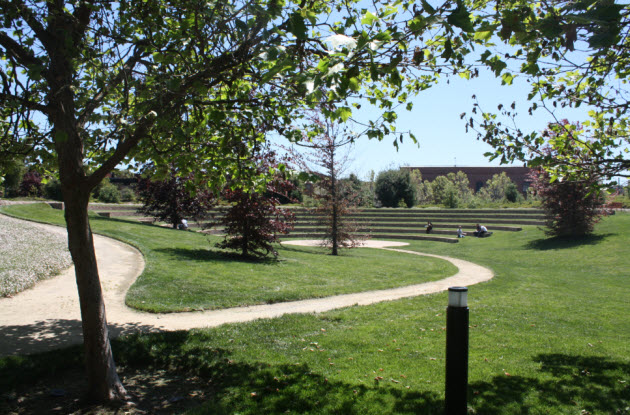 While we waited to get inside, we got a good view of the surrounding scenery. There’s a cool grassy amphitheater. 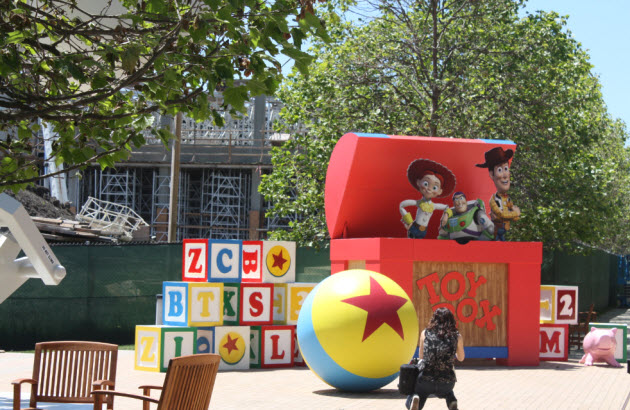 To promote Toy Story 3 and its game, Pixar and Disney built a larger-than-life toy box. In the background, you can see that Pixar is expanding. 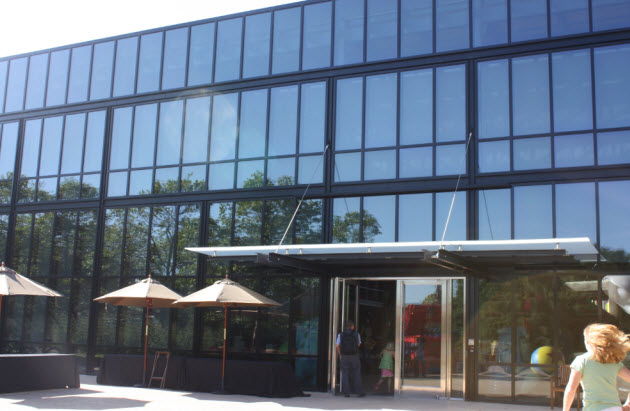 Hey, is that a kid sneaking inside the building? 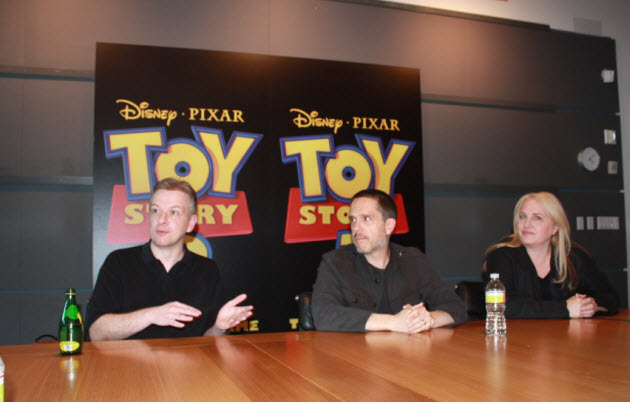 Sadly, the screening room was a no picture zone. But after the short snippets, the Pixar game and movie brass talked about making the game and movie together for the first time. On the left is John Blackburn, general manager of game developer Avalanche Studios; in the middle is film director Lee Unkrich; and on the right is producer Darla K. Anderson. They worked together starting more than 2.5 years ago to build the game as the movie was made. 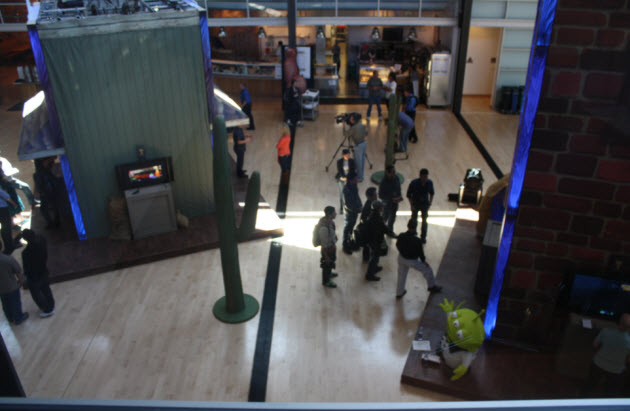 Disney took over the lobby with a Toy Story 3 Western town and stations where everyone could play the game. 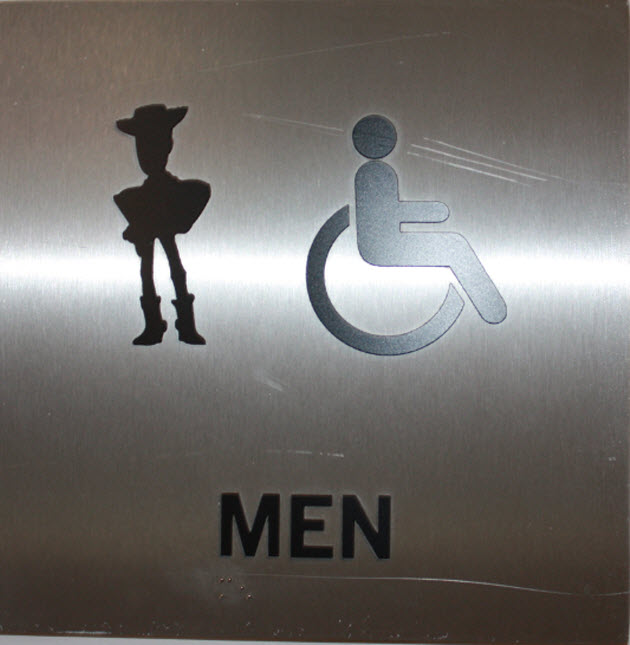 Myth or not? Our tour guide said Steve Jobs designed the Pixar headquarters for collaboration. To get people to come to the central lobby, he asked for the bathrooms to be built close to the center. That way, people would have to get away from their desks and take a break where they could see people from other departments. I supposed it works. 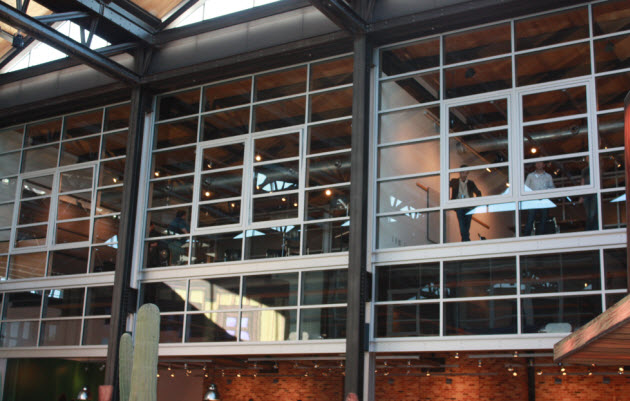 The floor above the lobby has plenty of glass and the roof skylights let in lots of natural sunlight. This isn’t a gloomy studio. 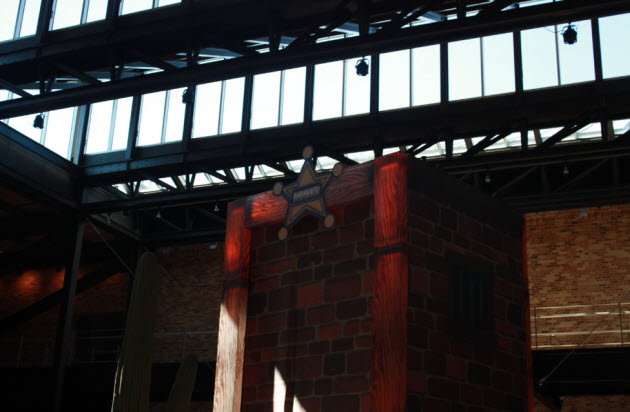 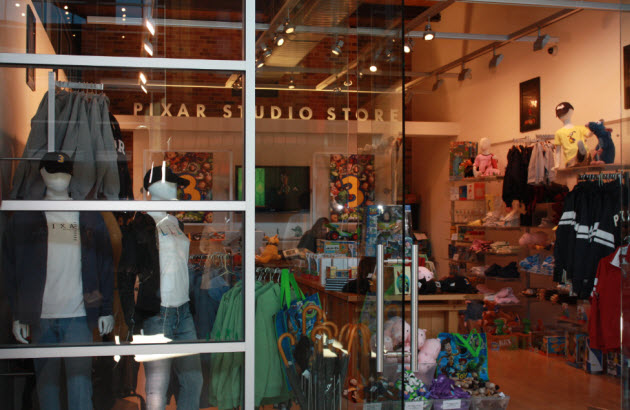 There’s a Pixar Studio Store. That’s a reminder that it’s owned by Disney. 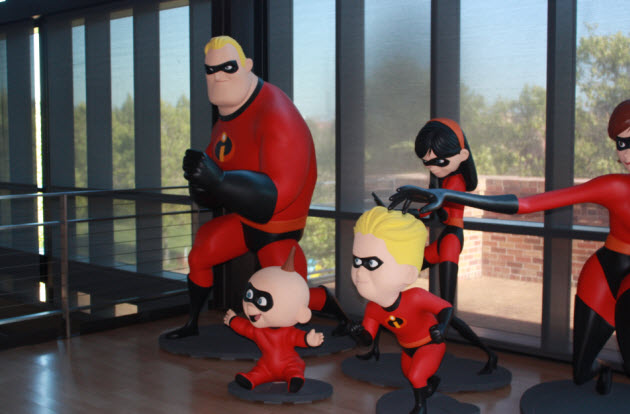 Up on the second floor, statues of the Incredibles adorn an open area with couches. 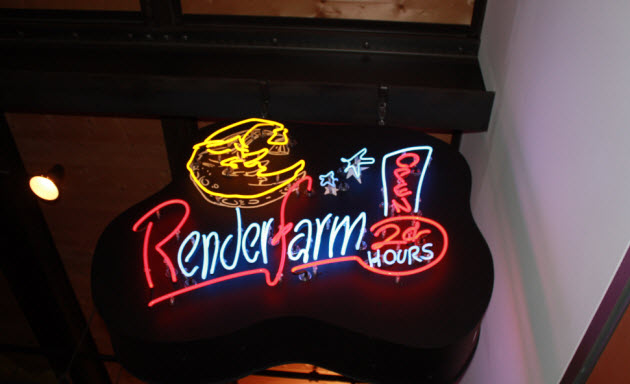 A sign for the render farm, which houses the computers that process the digital animations produced by the artists, shows that it’s open around the clock. 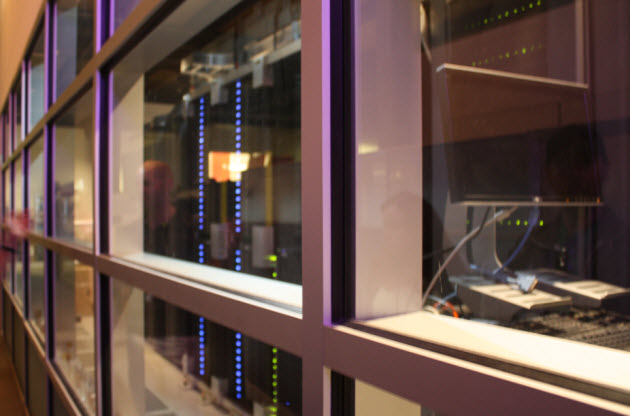 Behind glass in an air-conditioned room, the servers keep humming. Dell supplies the Intel-based servers that produced every scene in the movie. 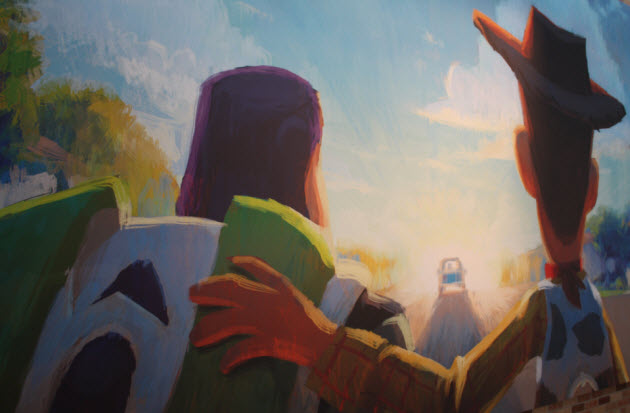 A mural of Buzz Lightyear and Woody hangs outside the movie theater. 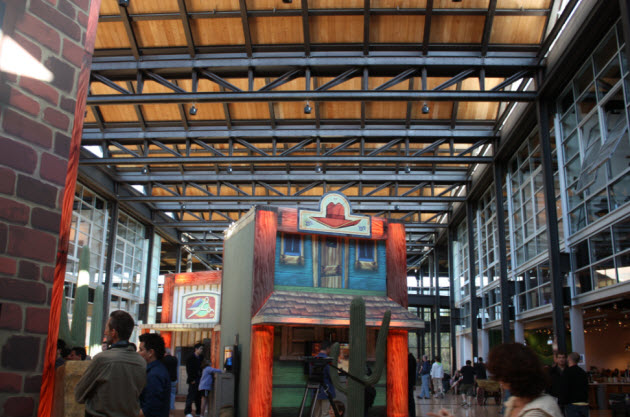 The main lobby is buzzing with life and light. 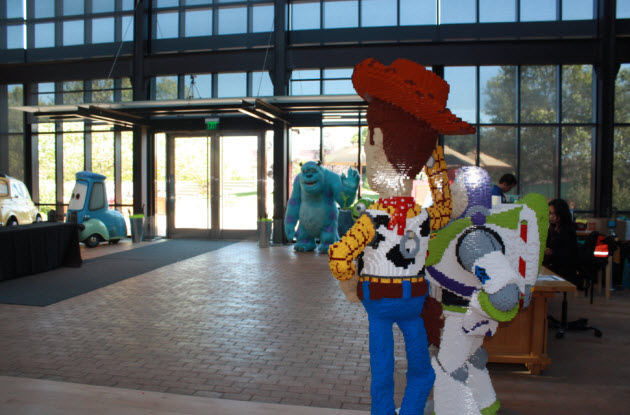 Life-size figures of Woody and Buzz, made entirely from Lego bricks, greet the visitors who come and go. 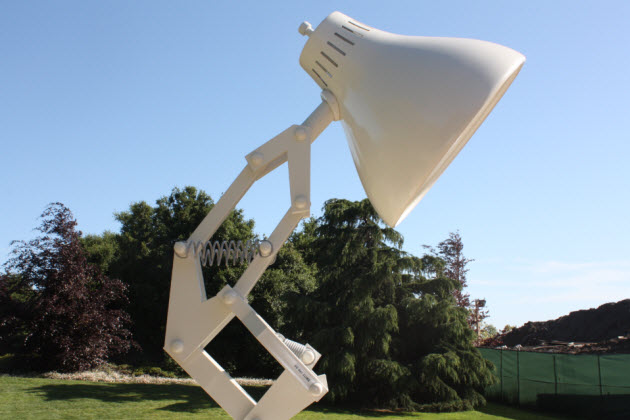 On the way out, I recognized a familiar character. It’s the lamp figure from the beginning of every movie. 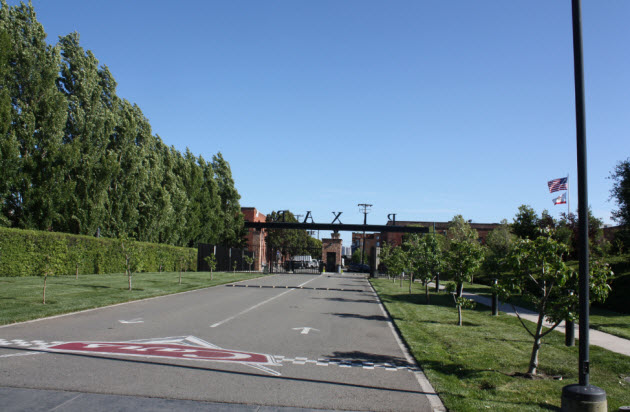