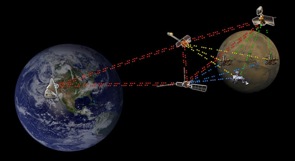 NASA announced today that it has completed its first successful test of a communications network in space that’s modeled on the internet.

The space agency could use the network to improve control over remote spacecraft and communication with manned missions. But the science fiction nerd in me can’t help dreaming about an actual deep space internet, connecting folks on Earth with those in space, on the moon and elsewhere.

The Earth-based and space-based internets also share a common lineage: Google Vice President Vint Cerf, who is known as the father of the internet, worked with NASA to design the deep space internet protocol a decade ago. Unlike the Transmission-Control Protocol/Internet Protocol (TCP/IP, which Cerf co-designed) used today, Disruption-Tolerant Networking (DTN) is designed to withstand the disruptions and delays that can occur when sending information over millions of miles in space.

In the recently completed test, a NASA craft sent images of space back to Earth, 20 million miles away. The next test will involve DTN software loaded on the International Space Station this summer.

By improving space exploration, the deep space internet could be a boon to private enterprises like SpaceX (see VentureBeat’s coverage of how NASA is turning to the private sector). And let’s not forget that Virgin Galactic’s on-Earth counterpart is touting its plans for in-flight Internet access, so it would be pretty cool to eventually see a similar service on space flights. Perhaps in a decade or two, ambitious web startups will look beyond international expansion, to the interplanetary. After all, the internet we use today was also developed by the government before opening to the public. (Of course, as author Vernor Vinge envisioned in his novel A Fire Upon the Deep, the space-based internet would probably be just as full of spam and stupidity.)

As for me, I’m anxiously awaiting the first tweet from space.