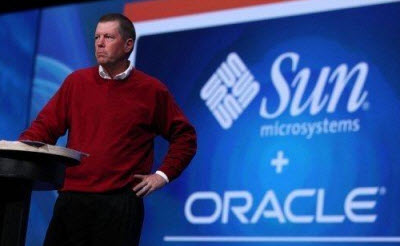 Scott McNealy is one of the legendary characters of Silicon Valley. It is jarring to read his goodbye note to Sun Microsystems employees as Oracle is poised to complete its $7.4 billion acquisition of Sun. In the email to Sun employees, McNealy said, “Thanks for a great 28 years.”

Both McNealy and Sun’s CEO Jonathan Schwartz are not expected to remain at Oracle after it swallows Sun, and both have now written goodbye notes.

I had the chance to watch McNealy on stage many times and to interview him face-to-face. He was always performing some kind of role. As a statesman, clown, practical joker, visionary etc. But this memo is not full of marketing dreck. It’s one of those rare expressions of a founder’s emotional attachment to his company, which generated $200 billion in revenues during its history and broke into the Fortune 200.

McNealy has been a fixture of the valley scene during his tenure as the ruler (first as CEO, then chairman for the last four years) of the Sun Microsystems empire. He presided over Sun’s meteoric rise as a workstation company, and oversaw its shift into servers at the dawn of the Internet age. Sun gave everyone an alternative to Big Blue, and made a bundle of money for its shareholders and employees in the meantime. It had a great run in the dotcom boom, identifying itself proudly as the “dot in dotcom” and then dropping the motto during the dotcom bust.

McNealy provided a counterforce, not just to the dominance of IBM but to Microsoft as well. McNealy claimed that he had a “big mouth who was always ready with a clever quip” (constantly referring to Microsoft as a “hairball” and to Bill Gates as a “convicted monopolist”) because he didn’t have a big marketing budget. He had to get his kicks in via the free advertising of the press, and reporters were always gleeful to use his witty remarks.

But Sun missed some golden opportunities to beat its rivals, and McNealy lingered longer than he should have. He kept trying to turn around Sun and return it to its former glory. But instead it was undercut by Intel-based computers. McNealy acknowledged that his company did not monetize its inventions as well as it could have, a reference to the now-ubiquitous Java programming environment. Sun had a lot of bruising battles, but McNealy wrote, “I never had to hide the newspaper in shame from my children.”

For the sake of money, McNealy had to bury the hatchet and make peace with both Microsoft and Intel. But it was too late. As McNealy bows out, it is ironic that one of his buddies, Steve Jobs, has ascended to the throne. Jobs managed to do what McNealy could not: rescue a failing Apple and turn it into the envy of all businesses. As Jobs noted earlier this week during Apple’s earnings report, it’s hard to believe that Apple has become a $50 billion company. But not so long ago, I would have expected, as was once rumored, that Sun Microsystems would have bought Apple.

Instead, as Apple rose, Sun sank. And it became all too easy to disbelieve McNealy’s view that Sun would rise again. Under McNealy’s replacement, Jonathan Schwartz, Sun reminded me of the Red Queen in the Alice in Wonderland books, always running as fast as it could just to stay in the same place. The Oracle acquisition is a much better outcome than I imagined for Sun.

“To be honest, this is not a note this founder wants to write. Sun, in my mind, should have been the great and surviving consolidator. But I love the market economy and capitalism more than I love my company,” McNealy said in the email. “And I sure ‘hope’ America regains its love affair with capitalism. And except for the auto industry, financial industry, health care, and some other places (I digress), the invisible hand is doing its thing quite efficiently. So I am more than willing to accept this outcome.”

It is appropriate that McNealy is selling his company to another valley icon, Oracle CEO Larry Ellision. It makes me feel like this is one general surrendering his sword to another. McNealy was a character and a historic figure. Like many of the icons of the valley, he had deep flaws. We will miss his presence, but it is indeed time for him to go and to close a chapter of Silicon Valley history.