Sony has been dribbling out news about The Last of Us Part II, and today it has opened the door for reviewers to give their first impressions about one of the tense action scenes in the game.

Sony’s The Last of Us Part II has been seven years in the making since the first game debuted in 2013 and won numerous Game of the Year Awards. It debuts June 19 for the PlayStation 4. With more than 100 million PS4s sold, Sony has a chance to sell tens of millions of copies of this game (as of 2018, The Last of Us sold 17 million copies).

I found the original’s story deeply touching. It’s about the teenage girl Ellie and gruff smuggler Joel — two survivors of the zombie apocalypse who spend their days just trying to survive. The graphic violence of the original can be horrific, but more often than not, Joel perpetuates it in the name of protecting Ellie, and later on it’s Ellie protecting Joel. After 22 or so hours of playing it, I decided it’s my favorite game of all time, and I interviewed the game’s creators about the grueling experience.

At the close of that interview, game co-director Neil Druckmann told me, “Now that we’re done and we’ve had some time to rest, the question is, is there another story to tell in this world? We’re trying to figure that out. We don’t want to do the Matrix Reloaded of video games. [Laughs] Can you do The Godfather Part II of video games, though? That would be the test. If we come up with something that’s exciting on that level, we’ll do it. If we don’t, we’ll do something else.”

Naughty Dog did find its way with the sequel. In part two, Ellie and Joel have settled in a thriving human town in Jackson, Wyoming, five years after the events of the first game. But something tragic happens, and Ellie goes off in search of retribution and justice.

The scene I’m talking about — dubbed “Finding Nora” — takes place in Seattle, midway through Ellie’s second day there. I have played the full game under a review embargo, and this is my first chance to give my impressions of this particular scene, which Sony showed last week during a State of Play presentation. This solo mission is a fair representation of the gameplay and how it’s different from the original game.

Improvements from the original

As I saw the extended trailer for Part II this week and played the scene, I felt a new appreciation for the difference between the old game and the new game in gameplay and graphics improvements. The story spans seasons and climates, including the snows of Jackson, Wyoming and the lush landscapes of Seattle. The shadows and lighting and attention to detail bring the cities to life, in all kinds of weather. This makes it perhaps the prettiest game ever created on the PlayStation 4 in terms of graphics, but it also has the ugliest fighting.

You can’t interact with everything. You can open certain drawers. And the environment isn’t destructible, in the fashion of Battlefield games. But the look is right. The cities look as you would expect them to look after a pandemic. Jackson has snowflakes flying through the air, and overgrown Seattle has blades of grass — which sometimes look a little too regular in their formation — blowing in the wind.

Ellie can do more as she interacts with the environment and enemy combatants. She can swing on ropes, traverse vertical structures to avoid trouble, navigate boats, ride horses, climb ropes, jump over gaps, break glass, and crawl through the grass to sneak up on enemies for stealth kills. Her movements are fluid, and more than ever you’ll feel like you are interacting in a movie-like experience.

She faces tougher enemies such as dogs who can trace her footsteps, stealth warriors who can attack her with arrows, and large numbers of zombies. Ellie can sprint, dodge attacks, and time her counterattacks. She can use enemies as a shield, and she can get help from her friends. This makes combat far more diverse than in The Last of Us.

And as she could do in the first game, Ellie can pit enemies against each other, making zombies attack human enemies. You can invest in role-playing game skills, upgrade your weapons at workbenches, and scavenge resources so you can craft everything including medical kits and explosive arrows.

What this scene shows 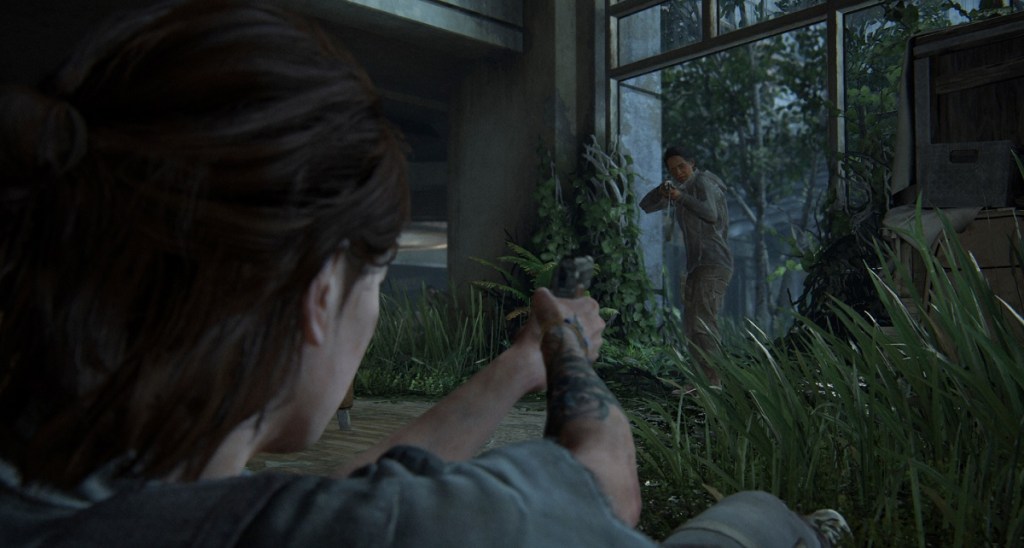 Above: If you get knocked down in The Last of Us Part II, you can shoot from the floor.

The Last of Us stood out from other zombie games because the fighting was intimate and intricate. Each duel with a zombie or a human enemy was a life-or-death struggle. You barely had enough bullets to get through a section of the game. You had to get your headshots right or waste precious ammo. You were not a superhero. And if you ignored one enemy, it would blindside you from your flank. You have to consider whether to run or fight, and how to take on a force that, if you approached head-on, will easily kill you.

The section begins as Ellie leaves her own base in a theater in Seattle in search of a character named Nora at a hospital controlled by the Washington Liberation Front, one of the groups that oppose the FEDRA [Federal Disaster Response Agency] central government in life after the pandemic. The WLF will shoot trespassers on sight, and Ellie has them on edge as she takes down guards one by one.

In Finding Nora, Ellie treks through downtown Seattle to the hospital. But she can’t just walk down the streets, which are overgrown, destroyed by earthquakes, and beset with the Infected, as the zombies are called, and WLF patrols. 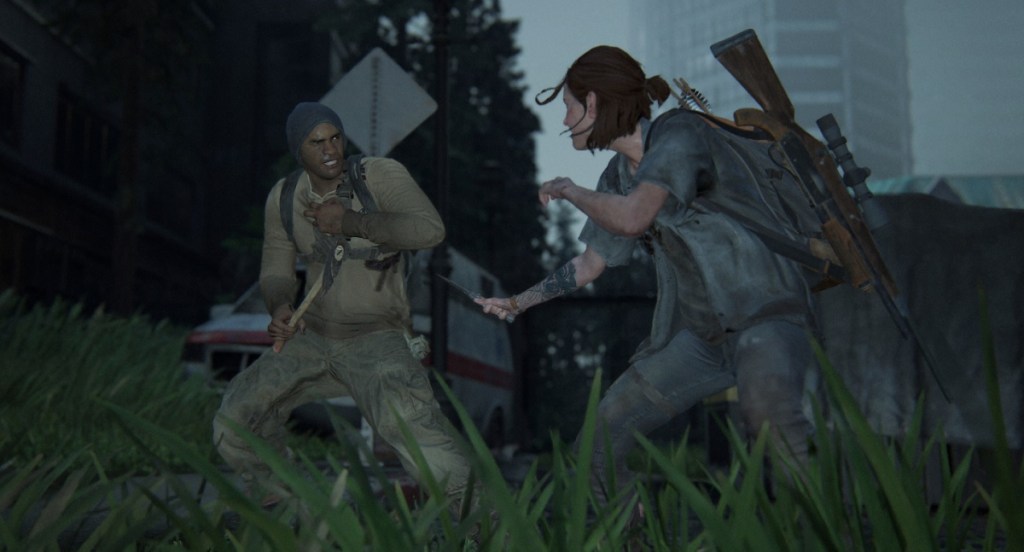 Above: Hand-to-hand combat in The Last of Us Part II.

Ellie can fashion a silencer for her .45 caliber pistol or use a bow to quietly take out soldiers. But Clickers, who have hard shells on their heads, take two headshots to bring down.

But the most efficient way to take down an enemy is silently, with just a knife. As Ellie sneaks up on human enemies, she grabs them with a hand over their mouth, lulls them into stop struggling by saying “shut up,” and then brutally stabs them in the jugular.

If you are in the right position, you can execute these takedown moves simply by pressing the triangle button on the PlayStation controller, and then the square button. If you mess them up, and the target turns on you, the scene goes loud. The target will scream, and everyone within hearing distance will converge on Ellie.