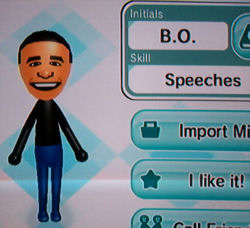 Microsoft and youth voting initiative Rock the Vote just announced a partnership to try to get gamers more involved in the presidential election. Starting on Monday (the first day of the Democratic National Convention), members of Microsoft’s Xbox Live gaming community will be able to use their Xbox 360s to register to vote, participate in election-related polls and post their opinions in an election forum.

This is just the latest illustration of technology’s increasing importance in the presidential election. Both Barack Obama and John McCain have outlined technology policies, there’s been talk that the next president should have a chief technology officer (a position that’s part of Obama’s policy) and increasing traffic to McCain’s website is seen as a sign of his growing popularity, although Obama’s site still gets many more visitors. In fact, a user-created Obama avatar (pictured above) is a popular choice on Nintendo’s competing Wii console.

For a youth-oriented group like Rock the Vote, getting online is a necessity. Even if the Xbox may not be the best platform for informed debate — although I really like the idea of an Obama vs. McCain session of shoot-’em-up game Halo 3 — it’s good to see the group experimenting with new approaches to see what sticks. Rock the Vote also launched a partnership with MySpace last month.

And what does Microsoft get out of the deal? Well, there’s the novelty and coolness in allowing users to register to vote on their game consoles, even if that probably won’t attract too many new buyers. Also, the press release notes that Microsoft will be at both the Democratic and Republican national conventions, and not just to help Rock the Vote — the tech giant has its own legislative interests, namely to promote awareness of its parental controls and put a damper on calls for video game censorship laws.