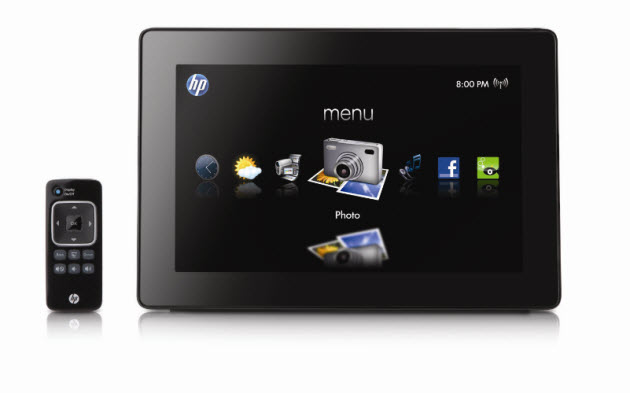 Hewlett Packard has beaten Apple to the punch in coming up with a beautiful tablet-like computer. The company’s just-announced DreamScreen products represent a new category of wireless connected screens.

These screens are hybrids of slate computers and digital photo displays.  [updated: They’re not multitouch screen-enabled. (You can easily imagine future models like that, once the costs come down). But you can control the panels through touch-enabled controls on the border of the screen.]

They’re not full-fledged computers that run Microsoft’s Windows software, but you can use them to keep up with Facebook friends, view photos as they’re updated in real-time, listen to Pandora Internet radio, share Snapfish personal photos and enjoy music and photo collections that are stored on other networked computers. It’s a category of computer that is suitable for casual use by broader, mainstream audiences who might use it while browsing TV.

Apple is rumored to be working on something similar, but it is not expected until next year. Given Apple’s example of the iPhone, I would expect that Apple would do a multitouch screen, and maybe even the full Mac OS X operating system. But I would also expect it would cost a lot more than this HP product. 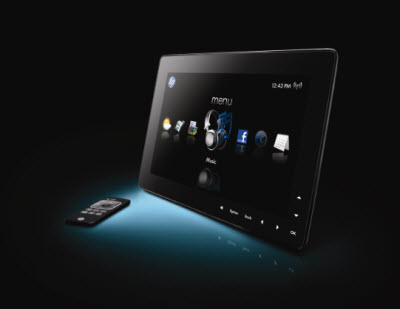 With these screens, you don’t have to boot your computer just to see what your friends are up to or to take care of mundane tasks such as viewing a calendar. They come with two gigabytes of built-in memory for storing photos, music, and home movies directly on the device. And they have a universal serial bus and flash memory card connectors so that you can load digital content from a USB drive or digital camera. You can also load content wirelessly (via 802.11 b/g wireless networking) or drag and drop content from a networked computer to the screen, using your finger. 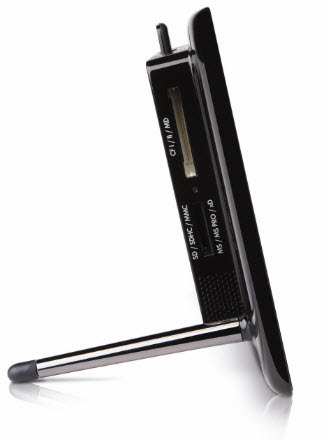 You can use the touchscreen to find (non-iTunes) songs, searching via artist, album or genre. The screens will fetch album cover art, and they have good speakers and connections for headphones or external speakers. You can listen to Pandora songs and give them the thumbs up so that the screen can recognize your favorites.

HP has included a new service dubbed HP SmartRadio, which aggregates streams of live Internet broadcasts from more than 10,000 radio stations around the world. Users can now listen to their favorite radio stations on the Internet by location or genre in any part of their home. The screens let you check the time, date, and weather too.

Setup is easy. You can use  a remote control that sits nearly invisibly atop the screen. Touch controls are visible only when you touch the border of the screen. The DreamScreen 100 is available online today at BestBuy.com, Amazon.com, and HPDirect.com. HP’s retailer partners, including 900 Best Buy stores, will have the screen on Oct. 11. The DreamScreen 130 will be available later this fall.