If you’re a gaming company seeking an edge over the competition, you’re probably also a big fan of game analytics. At the same time that you are measuring your regular MAUs and DAUs, CPIs and CTRs, you’re also measuring LTV, CAC, and of course ARPU, no matter what platform you’re on.

But rather than knowing that your CTR is low, wouldn’t you like to know why it’s low? And, of course, don’t you also want to be able to identify which players are likely to have the highest LTV? And which campaigns are driving the most revenue to your company?

It shouldn’t be so difficult, if you’re equipped with advanced analytics.

Alongside measuring those top-level metrics, you’d want to add to your dashboard more complex metrics that might involve different data sources, or require tracking user behavior over time, such as LTV per player (and paying player) and average player deposit amount.

You’ll also see important KPIs such as GGR (gross gaming revenues), ARPU, average active days, player turnover, wins, and jackpots. Combining these into one dashboard and integrating data from different sources such as Google Adwords, Facebook campaigns, mobile attribution, or financial systems together with web and mobile user event data give you a performance overview and understanding of your player behavior — as well as revenue aspects such as campaign ROI, mobile attribution, and financial data.

From here you can drill down deeper for a clearer picture on user behavior. Your players’ behavior can’t be treated as a single or multiple actions that happen at one snapshot in time: Digital behavior is more complex than this. It’s a series of user actions over time, and time-series behavioral analytics is required to gain a complete picture of each users’ complete journey.

This is crucial in gaming, since the player journey can start with a campaign click that might continue to a registration followed by a FTD only a while later.  With time-series analytics, user identity is maintained through the entire journey, across all touch points and sessions, which is key to understanding behavior built as a series of actions over time.

Experienced gaming analysts know, for instance, that players who complete a number of actions during the same session have a significantly higher likelihood for a FTD as well as a higher retention rate.

In addition, players in the beginning of their user journey may wish to remain anonymous until they finally convert, register, or make a deposit. Time-series behavioral analytics must have the ability to unify multiple user identities in order to understand the complete path of your players’ journey.

Here are a few examples of the types of user behavior analysis your gaming company or platform needs in order to drive fast business growth.

What were the last three steps that led players to perform in-app purchases during the last week?

What is the most followed path that led to a certain deposit sum? 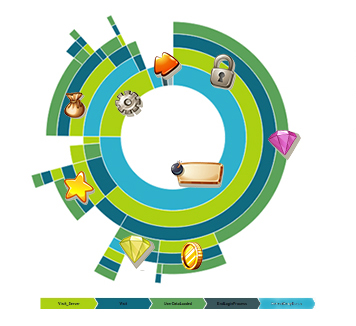 Behavioral path analysis analyzes both the time and steps players took before completing an in-app purchase in order to give you answers to these questions. You then have insights for both when to deliver your players the next-best offer and the optimal time in the game to trigger that offer.

Another tool to analyze player behavior over time and reveal insights into why players make in-app purchases is cohort analysis. For instance, if a gaming company realizes that free users who play throughout the night are making IAPs the next day afterwards, these are the types of behavioral player profiles that can be targeted with a campaign. Once you understand the motivation for player behavior, you can easily optimize for it.

Target players with the highest LTV

Many gaming companies learn that 80% of their revenue comes from 20% of their players. Focusing on these players and targeting campaigns to them will significantly increase revenue. Reverse cohort analysis can be an extremely effective tool to gather insights of IAPs, starting with an action of the IAPs and going back in time to analyze the events that lead to it. You’ll analyze past player actions such as previous deposits, losses, session duration, levels completed, and types of games played.

For instance, a gaming company might discover through reverse cohort analysis that players who make their first IAP after 10 days of playing on the site have a higher LTV. Such a discovery could lead to focusing on creating a smooth onboarding experience for players in order to shorten this delay period.

Identify players that are most likely to make FTDs

I know of a gaming company which used behavioral analytics to discover that players who spent 6-times longer than average during their first visit to the gaming site had a higher probability of making an FTD (first-time deposit).

Another gaming company realized that players who won their first game on the site had a higher likelihood of becoming an first-time depositor. To optimize this player behavior, they added a “test game” before these players made their FTD. In this “test game,” players always won the first round. The uplift was huge!

Start analytics at an early stage of your business

The sooner you’re able to apply those business insights to your company growth, the greater the impact. That’s why it’s important for your company to implement advanced game analytics as soon as possible in anticipation of that high-phase growth stage, rather than waiting until afterwards.

During this early stage, time and resources are precious. You’ll want to focus as much as possible on developing your product and rely on experts to deliver a full-stack analytics solution rather than building a solution in-house, which can take anywhere from 12-18 months.

By focusing your analytics on the metrics that really matter and incorporating them early into your game, you’ll be miles ahead of the competition – and you’ll reap the rewards.

Guy Greenberg is the cofounder and president at CoolaData, a leading behavioral analytics platform.