For fans of the Golden State Warriors, today is a special day: It’s opening day and the team will be hoisting the banner marking their NBA championship from last year. To mark the occasion, the league is presenting the first game of the season in a very unique way, thanks to the use of virtual reality (VR). With a Samsung Gear VR headset, fans will be able to watch the Warriors play the New Orleans Pelicans as if they were in the arena.

The NBA and Turner Sports have teamed up with NextVR to power this one-of-a-kind experience. Fans can download the NextVR app within the Oculus app store, open it in their Samsung Gear VR headset using their Samsung Note 4 or Galaxy S6 phone, and instantly be transported to Oracle Arena in Oakland, California. These fans will be given a “front-row seat” for the ceremony in which the Warriors will receive their championship rings, and also for the opening night basketball game.

Cameras have been strategically placed throughout Oracle Arena in order to give fans an “immersive experience as if they were watching from a courtside vantage point.” This is the first time that virtual reality has been officially implemented within a professional sporting event, although the NBA experimented with the idea during the 2013-14 season at a Warriors game. NextVR has recorded previous NBA games in the past, including last year’s finals, but that wasn’t broadcast live on behalf of the league. 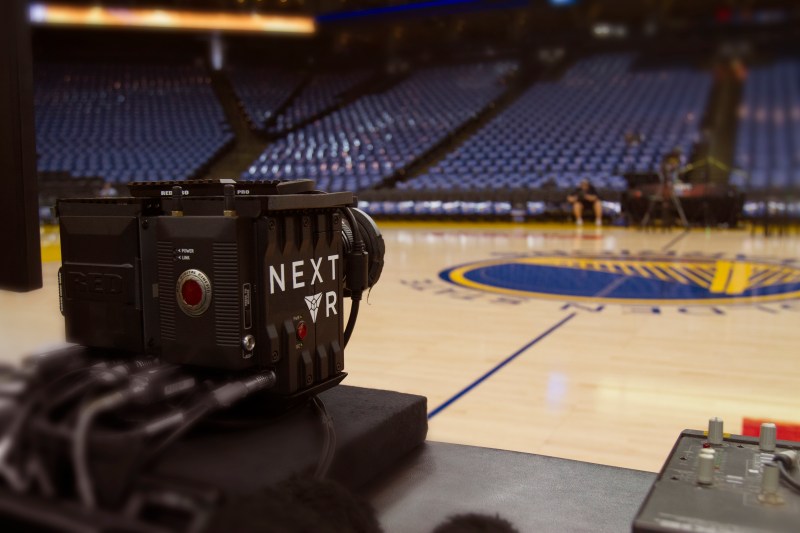 Above: NextVR camera positioned courtside at Oracle Arena for the NBA’s Golden State Warriors’ game against the New Orleans Pelicans on October 27, 2015 from Oakland, Calif.

While virtual reality has officially come to the NBA, there’s no idea how it will be used going forward. This spring, it was reported that league commissioner Adam Silver met with Stanford virtual reality expert Jeremy Bailenson to talk about the potential use of this technology within games.

NBA vice president of global media distribution Jeff Marsilio told The San Diego Union-Tribune, “We are a truly international league with fans all over the world, and while the best experience is attending a game, for most of these fans, they’ll never have the opportunity to sit courtside at a game. Virtual reality delivers amazing vantage points like the NBA All-Star Game from a courtside seat.”

Using VR during a Warriors game seems natural as the team has already embraced technology to help it reach a more engaged fanbase. The team’s VP of digital and marketing, Kenny Lauer, told VentureBeat previously that one of the Warriors’ goals is enhancing the overall fan experience: “It’s not just about basketball, but about being an entertainment company…people want to be entertained — how will their lives be better with the Warriors in it?”

You can log in to watch the Warriors play the Pelicans on Tuesday, October 27 starting at 10:30pm ET/7:30pm PT.