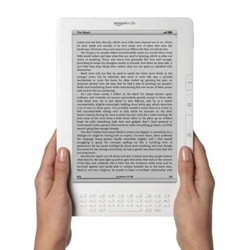 As expected, Amazon announced a new version of its Kindle eBook reader today, with a larger screen for reading newspapers and textbooks. It’s also not surprising that the larger device carries a bigger price tag, but that didn’t stop my eyes from widening a bit when I saw the Kindle DX will cost $489.

That’s right, the new Kindle will cost almost $500. That’s about $200 more than an Xbox 360 with a hard drive. Granted, the price isn’t that much of a jump from the standard Kindle, which at $359 already feels pretty steep, but which is nonetheless selling faster than expected. Still, I love to read and all, and I love newspapers, but there’s no way I’m spending that kind of money just so I can see The New York Times on a big screen. And that doesn’t even get into the question of whether readers really need the bigger screen — that makes sense if you’re trying to parse (and make electronic notes on) a textbook full of complicated diagrams, but I’m not sure readers who have gotten used to finding their news on websites and RSS feeds care about the size.

So what do you get for your money? The features include a 9.7-inch screen (creating 2.5 times the surface area of the standard Kindle), a PDF reader, an auto-rotate feature (like the iPhone’s) that lets you read in landscape mode, and 3.3 gigabytes of memory for storing up to 3,500 books. The electronic ink display has 16 shades of gray, so you can see all the subtleties in those black-and-white photos and charts.

Amazon also announced a number of partnerships that should help get the Kindle DX into readers’ hands. The Boston Globe, The New York Times, and The Washington Post will be offering will be Kindle at a reduced price to readers who commit to a subscription. (Unfortunately, this deal is only available in the areas where those papers don’t offer home delivery.) Arizona State University, Case Western Reserve University, Princeton University, Reed College, and Darden School of Business at the University of Virginia also plan to launch trial programs that will make these devices available to students.