One incident has stuck with him his entire career, he told Indian daily newspaper the Deccan Chronicle last July. As member of his public school’s cricket team, he was bowling some “really ordinary stuff” when his captain decided to intervene. The captain took the ball and bowled a stellar over, delivering the team a much-needed breakthrough, then he tossed it back to Nadella.

“I will never forget that,” said the Microsoft executive.

The result of that lesson has manifested itself throughout Nadella’s lengthy tenure at Microsoft: When things aren’t going well — or even when they’re just ordinary — he knows it’s time to intervene.

But Microsoft is no cricket field; it’s a technology giant slowly lumbering into a cloudy, mobile world. Under Nadella, who Microsoft announced as its third-ever CEO this morning, Microsoft’s cloud and mobile initiatives will likely pick up some speed. As his first point of focus, Nadella has promised to “ruthlessly remove any obstacles” preventing innovation. 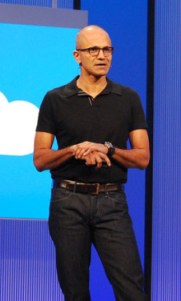 Outgoing CEO Steve Ballmer hasn’t ignored those areas. He kicked off the shift to cloud with Windows Azure and Office 365, and he’s invested in mobile efforts like Windows Phone and Surface. While neither effort has been executed perfectly — particularly in mobile, which comes off as a “me too” strategy — the biggest problem was Ballmer’s sluggish pace.

Microsoft’s modest gains in cloud and mobile haven’t supplanted declining PC sales and the shrinking value of licensed software. But there’s no returning to the Bill Gates era, when Windows and Internet Explorer were so pervasive they prompted antitrust lawsuits. The clear path forward is as a mobile-friendly, service-oriented company.

“[Nadella] strikes me as the kind of guy who could accelerate that strategic shift,” Forrester Research analyst Ted Schadler told VentureBeat. “He has a track record of making things happen in an organization where that’s hard to do.”

His success came from knocking down barriers between departments

After a quick stint at Sun Microsystems, Nadella joined Microsoft in 1992 as a program manager in the Windows developer relations group. He’s been at the company ever since, rising up the ranks to become president of Microsoft’s $19 billion server and tools business in 2011.

In that role, Nadella drove the sales organization to sell cloud-based services on equal footing with licensed software. To accomplish that, he knocked down some internal barriers to change the compensation model for salespeople, who now earn as much selling Office 365 as they do selling a licensed version of Office. Nadella also fostered a lot more agreement throughout the organization — across server and tools, Office, and the Dynamics team — to effectively bundle their cloud services more closely together, so they all build on what the others can do. All of Microsoft runs on Azure, Microsoft’s public cloud infrastructure, but Azure was architected with apps like Office 365 in mind.

“He understands how to work within the Microsoft culture”

In an earlier role, Nadella proved his worth by turning around the troubled Microsoft business solutions division (now the Dynamics team). When he took over, a big part of the workforce was based outside the company’s Redmond headquarters, and growth had largely stalled. Some inside the company questioned whether Microsoft should continue supporting it at all. But Nadella whipped the business into shape, scaling it from about a stagnant $1.5 billion to around $5 billion in five years.

“It was clear, even from the very early stage, that he is a very quick study, and he understands rapidly what you can change, what you can’t change, and has an opinion on how to make that change happen,” said Kevin Spain, a former Microsoft executive who worked with Nadella and now serves as a general partner at Emergence Capital Partners. “He also understands how to work within the Microsoft culture — and this is not a trivial thing.”

Painting a new vision for Microsoft

Although Nadella led Bing engineering and online advertising for three years, he has less experience on the consumer side, which makes up more than half of Microsoft’s business. But Microsoft is a massive company; no executive stepping into the CEO role is going to be deeply familiar with every sector of the company. 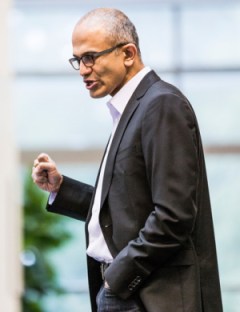 “Instead, you need someone who is a great leader, and a great team builder, and I think Satya is both of those things,” said Spain in a conversation with VentureBeat.

As Nadella enters the CEO role, Microsoft faces a bevy of challenges, but there are two substantial areas where the company is stuck: People are migrating away from Office, and Windows Phone has failed to gain traction.

In this morning’s memo to Microsoft employees, Nadella talks about a software-powered world where a broader range of devices and services “can truly empower every individual and every organization.” If Nadella stands by that vision, he may finally decouple Office from Windows — not just with Office 365, but with native versions for iPad, Android, and every other platform where people are using alternatives to get their work done. He’s bound to face some pushback from the board, on which both former CEOs still sit, but Nadella has previously demonstrated the ability to navigate rough political waters — even while working with Gates and Ballmer, according to Spain.

“He knows he has to approach mobile in a new way”

Most significantly, as Microsoft closes its Nokia acquisition, the company desperately needs to revamp its mobile strategy. The company’s best chance is cranking out this decade’s BlackBerry phone: a consumer-grade product with business-ready capabilities, a device and operating system people want to use at work. That also entails improved development tools for Windows Phone, which got a boost with the Windows Phone 8 SDK but still lag behind iOS and Android development kits.

“[Nadella] deeply understands this [situation] and he knows he has to approach mobile in a new way,” said Forrester’s Ted Schadler.

There’s little doubt cloud will take a center role in the new Microsoft. It’s been an area of steady growth for the company, with recent cloud revenues doubling year-over-over (the company doesn’t break that up into specific categories). With Nadella at the helm, Microsoft will pursue an ever-expanding cloud value proposition for its customers, with more integrations between its own services — and other vendors’ offerings, too.

Nadella has no experience running a public company, but he has all the makings of a capable CEO. He’s technically proficient and highly personable. He’s humble, but unafraid to lead by example. And he’s unwilling to accept the ordinary.

“Many companies aspire to change the world. But very few have all the elements required: talent, resources, and perseverance,” wrote Nadella in a memo to employees this morning. “Microsoft has proven that it has all three in abundance. And as the new CEO, I can’t ask for a better foundation.”