The launch, which has been timed to coincide with Pi Day, comes two years after the organization introduced its previous top-of-the-line Raspberry Pi 3 model and one year after the entry-level Raspberry Pi Zero W.

By way of a quick recap, the Raspberry Pi is a credit card-sized contraption that serves as a building block for functional computers — users can construct fully working PCs or machines that control their connected home, for example. It has come a long way since its launch way back in 2012 — the organization now sells seven versions of the device, and it merged with coding club network CoderDojo last year.

Around 19 million Raspberry Pi units have been sold over the past six years, with the Raspberry Pi 3 accounting for around half of those.

The Raspberry Pi 3 Model B+ continues where its predecessor left off insofar as it sports a 64-bit processor and wireless connectivity. But the processor is now a 1.4GHz quad-core, up from 1.2GHz, while the wireless is now dual-band with added support for 5Ghz bands. 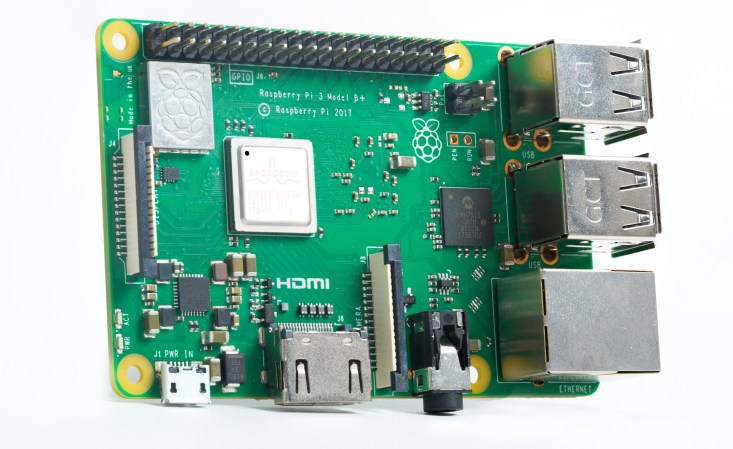 Above: Raspberry Pi 3B+

It also now offers Bluetooth 4.2 support compared to Bluetooth 4.1, and ethernet networking should be speedier due to the introduction of gigabit ethernet over USB 2.0, though bandwidth is limited to a maximum of 300 Mbps — still, that’s three times more than the previous model.

Finally: The upgraded Pi also now supports power-over-ethernet (PoE), meaning you’ll soon be able to power the device through its ethernet port, though you’ll need to wait for a separate Poe HAT to launch “shortly.”

In short, the upgraded Pi promises more speed and power. And similar to the Pi 3 Model B, it costs $35 — while the previous model is now on sale for $5 less through some outlets.