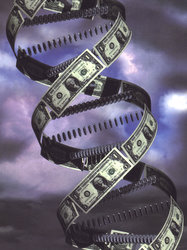 (NOTE: This is the second of two posts on Knome, a newly launched startup that offers to sequence your entire genome for $350,000. For part one, which provides a broad overview of Knome’s whole-genome sequencing and how it differs from services offered by other personal-genomics companies, click here.)

First things first: The company’s name is pronounced “nome,” as in the Alaskan city. A bemused debate over proper pronunciation has circulated among folks in and around the personal-genomics world ever since Knome’s teaser Web site appeared several months ago. (Personally, I’d been hoping we’d all be calling the company “K-nome.”) “The word ‘genome’ sounds a little like ‘Gee, know me’,” says Jorge Conde, Knome’s CEO. “We took off the ‘G’ and just make it ‘know me’.” Only you don’t pronounce a long “e” at the end.

Founded earlier this year, Knome aims to establish whole-genome sequencing as the “gold standard” for personal genomic analysis. (Their press release is here.) The company draws a sharp contrast with other recent personal-genomics companies such as 23andMe, arguing not only that full-genome data is far more solid and reliable than the rough-and-ready scans 23andMe and its ilk rely on, but that Knome is especially devoted to assuring the privacy and confidentiality of its users’ genetic data. (More on that in a moment. For more on the potential benefits of full-genome sequencing, see part one of our Knome coverage.)

Of course, there’s also a larger question hanging over Knome and any other companies that aim to tackle whole-genome sequencing at this early stage: Will they be content to remain boutiques for the wealthy, or will they aggressively drive down prices as sequencing costs fall in order to appeal to a mass market? It’s probably too early to say, although odds are good that competition with other personal-genomics companies will put some serious pressure on prices over time.

So far, however, Knome is most definitely a boutique. One telltale sign: Conde always refers to Knome’s customers, those earliest of early adopters of the new genetic technology, as “clients.” The company isn’t especially forthcoming about most of its operations — where its sequencing technology is involved, for instance, Conde merely emphasizes that Knome is “technology agnostic.” And it has even less to say about its potential clients — some of whom, Conde says, have approached the company via third parties in order to remain completely anonymous.

Knome has received more expressions of interest in being sequenced than it has capacity to process at the moment. As a result, it has limited initial enrollment to 20 people, who will be admitted on a first-come, first-served basis once they’ve completed an initial screening step.

Prospective Knome customers will eventually be able to sign up for the service online, although for now the company’s Web site only lets customers request additional information via email. Even once online registration is available, that step will primarily involve working through an “education and disclosure” process intended to ensure that customers know what they’re getting into, particularly in terms of any potential bad news that might be lurking in their genes.

Next, customers pay an upfront deposit against the $350,000 fee — Conde declines to say how much that would be — then await a visit by company representatives who will draw blood for the sequencing, then cart it back to Cambridge for the sequencing. (In order to ensure plenty of DNA for the sequencing, Knome prefers to work with blood samples instead of saliva, which is what 23andMe, for instance, relies on.)

Another installment payment will fall due before the sequencing itself begins. That step could take anywhere from weeks to months, Conde says, depending on exactly how many bottlenecks develop in the course of processing customer DNA. “This is not a service where you sign up and have the answer in four days,” Conde says. Knome will do most of the sequencing in-house, although it may contract out some of the work to as-yet unnamed partners. Knome intends to maintain strict anonymity of DNA samples throughout the entire sequencing process. (UPDATE: In an email, Conde later clarified that Knome’s partners will handle the sequencing, while the startup will do most of the results analysis in-house.)

Yet another installment payment is due once sequencing is complete, at which point Knome says its customers will “own” a digital copy of their genome. What exactly the company means by this isn’t yet entirely clear, but Conde insists that Knome intends to renounce any form of proprietary control over its customers’ genomic data. “What we’ve developed is a way for individuals to own their sequence, in the sense that they control how it’s accessed and stored,” Conde says. That appears to include actual delivery of a copy of the data to customers, although Knome also plans some form of online access — presumably involving high-level encryption and other technological tricks — designed to ensure that no one, including Knome itself, can access a customer’s data without his or her approval. Among other things, the company also intends to avoid storing genomic data in a single, potentially vulnerable database, and instead plans to rely on some unspecified form of distributed storage. What that might look like is anyone’s guess at this point.

In any case, Knome’s attention to these details is fascinating, and at a first pass it certainly sounds as though the company has given considerably more thought to protecting its customers’ privacy and anonymity than have many other personal-genomics companies, although without details it’s impossible to judge how well any of this is likely to work. (It’s also fair to say that Knome is charging enough that its customers should have sky-high expectations on this front.) Conde says the company will eventually disclose more about its security and privacy setup.

“There have been numerous examples [across many industries] of customer data released by accident or malice, lost via accident or malice, or in rare cases, subpoenaed or requested by authorities,” Conde says. “It’s very important for us not to put clients in a position where we’d have control over their very valuable and sensitive information in that way.”

Finally, of course, Knome plans to offer a suite of analytical and interpretational tools designed to make sense of the vast amount of genetic information it plans to deliver to clients. Knome will conduct its own analysis of a customer’s sequenced genome, and the final installment of the $350,000 will be due when it’s complete. From that point on, Knome’s applications will aim to keep its customers up to date on how the latest scientific findings about disease risk or other genetic factors affect them. Beyond that, it’s up to the customer to decide what, exactly, they want to do with the data for which they’ve just blown a third of a million dollars.

Knome, of course, has some ideas, but will let its customers decide if they want to participate in, say, research studies on genetic influences in disease, response to drugs, behavior, intelligence, or anything else. “We certainly hope our clients will want to participate, but our system puts them in control of who has access to their information,” Conde says. At other companies — 23andMe in particular — participation in research studies is effectively required, although customers have some ability to withhold personal, non-genetic information if they choose. Such research studies, particularly those involving the pharma and biotech industries, may in fact emerge as a primary money-making opportunity for companies like 23andMe — see, for instance, our coverage here.

Knome is currently privately funded and declines to disclose its current investors. The company has not taken venture funding to date, although Conde adds that the company would certainly consider a venture round at some point in the future.