The speed of Oculus VR

Oculus has had the lead since Palmer Luckey showed off the working prototype of the Oculus Rift in mid-2012. He won over John Carmack, the legendary graphics wizard and programmer at id Software, maker of Doom and Quake. After Carmack demoed the tech to press at the Electronic Entertainment Expo (E3) show in June 2012, Oculus started to become hot. It hooked Iribe as CEO and raised millions in a Kickstarter campaign.

In the summer of 2013, Oculus raised $16 million in venture capital. At the same time, tragedy struck. Oculus VR co-founder Andrew Reisse was struck and killed by a car that was fleeing the police while he was in a cross walk. His death brought everything to a halt at the close-knit startup. The funding announcement was put on hold and work on the HD demo for E3 halted. The team gathered a memorial for Reisse and helped support his family. But the company rallied together and employees at Epic Games, the partner on the virtual reality project, flew out to finish the job that Reisse was leading.

With the help, Oculus VR was able to meet its milestones. Developers began buying its prototypes by the thousands. As its momentum grew, Carmack joined the company to work on a mobile version of the Rift. Each new prototype was better, and Netscape founder Marc Andreessen’s Andreessen Horowitz led a $75 million investment round last December. That put Oculus into a much higher realm of public consciousness.

In all that time, Oculus hasn’t yet shipped a consumer unit. And it still hasn’t scheduled the final launch date, as it still has to address issues such as creating crystal clear graphics on the device’s screen. This evidently meant that Oculus, which less than two years old, wasn’t moving fast enough. And so further acceleration was in order, by means of an acquisition.

Zuckerberg suggested that the virtual reality platform could be important in five to ten years. 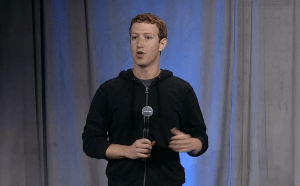 Zuckerberg said, “There are not that many things that are candidates to become the next great computing platform. This company Oculus has a very clear lead in doing that, and we felt that we could apply a lot of leverage to accelerate their growth.”

Zuckerberg noted that Oculus had already acquired many of the best people in the industry. The acquisition of Oculus doesn’t mean that all of this is going to come to an end.

The fact that Carmack, a pioneer of 3D gaming, will now be working for Facebook is one of the odd byproducts of this acquisition.

In a tweet, Carmack said, “I have a deep respect for the technical scale that Facebook operates at. The cyberspace we want for VR will be at this scale.”

Facebook is betting on the technology in a way that seems like it is competing with Google Glass, the glasses-like headset that allows you to look at a display while you’re walking around the real world, said Phil Sanderson, a partner at the IDG Ventures venture capital firm.

“WhatsApp is strategic and immediate, but Oculus is speculative and long-term for Facebook,” Sanderson said. “I believe Oculus would have more of a chance if it weighed 44 grams like Google Glass. It reminds me of much of the virtual reality companies we saw in the late 1990s. The tech is better, but the ‘chassis’ form factor is not.”

Billy Pidgeon, a longtime gaming analyst, said, “The Oculus buy is exciting because its potential is larger than the games sector and because telepresence, virtual reality, and augmented reality are past the hype bubble and are close to ready for the consumer market. Still, it’s early enough that there is plenty of overhead for developers of all sizes and types and for a variety of service providers. Also there are other big players moving around these technologies, including platform-based plays from Google, Apple, Sony and (probably) Microsoft. Beyond the games sector, there’s an inherent connection to broad applications in consumer and enterprise sectors, including wearables in general, communication, localization, retail, and personal networks.”

Meanwhile, Peter Relan, head of the 9+ technology accelerator firm and a frequent game investor, said, “The tech industry has always underestimated the new gaming industry. The fact is it’s the majority of Apple’s App Store revenues, and it’s no more of a hit business than any mobile consumer service start up. Most of those fail too.”

Owen Mahoney, chief executive-elect of Asian online games giant Nexon, said, “Once again we’re seeing that what is moving the industry forward is not coming from the usual quarters but from teams that care deeply enough about games and gameplay to try things that are very different than what had already been in the market. Both Rift and [King’s Candy Crush] are deceptively similar to things that were tried in the past, but are in fact very differentiated.“

Margaret Wallace, CEO of Playmatics, said that the Oculus and King news were a “double rainbow” for gaming. But the double rainbow could also be a mirage.

Some gamers will be suspicious about what Facebook will do with their favorite gaming platform. Markus “Notch” Persson, the creator of Minecraft, said in a post he is very excited about virtual reality, but distrustful of Facebook.

“I understand this is purely a business deal, and I’d like to congratulate both Facebook and the Oculus owners,” Persson said. “But this is where we part ways.”

Luckey said in an interview that the knee-jerk reaction to the notion of Facebook buying Oculus is puzzlement.

“Facebook and Oculus are not the obvious fit,” he said. “Almost every developer we are working with has had a good reaction. Notch is the exception to the rule. Once he sees everything that we are going to do, I hope he will change his mind.”

“If Oculus was worth $2 billion, it is not anymore,” Thompson said. “Facebook does not get gaming and as a platform. Facebook has been hostile to gamers as well as game developers. Both have been burned. This is a setback for gaming and Oculus will now have a much harder time attracting developers to Rift.”

Nate Mitchell, another founder of Oculus, said in an interview, ” We know that virtual reality goes beyond games. I’ve talked about it with you. Brendan has. Facebook really gets that. One of the more exciting things about the partnership is that people don’t think of Facebook really as a gaming company.”

He added, “Brendan, Palmer and I — none of us play Facebook games. We are hardcore gamers. Part of this is we want to teach Facebook about games and game development, just as much as they are going to help us on platforms, social, scalability, and operating at a whole new level. When these partnerships happen, it only works and is healthy if we bring something new to the table. I couldn’t think of a better partner than Facebook.”

For sure, the Facebook-Oculus combo won’t be the only virtual reality gaming solution. Competitors are sure to arise. And that competition is going to be good for both gamers and nongamers, whose interests, oddly enough, may very be one in the same.