Despite Facebook’s blockbuster $3 billion Oculus acquisition in 2014, augmented and virtual reality has been too early stage for large scale mergers and acquisitions (M&A) so far. But that’s set to change in the next year to 18 months, so let’s look at what could drive M&A deals going forward.

Where Digi-Capital’s Augmented/Virtual Reality Report Q1 2017 and deals database tracked $1.5 billion investments in the last 12 months to Q1 2017, there was only $600 million of M&As in the same period. That dynamic of investments outstripping M&As is typical of early stage tech markets, when deal-making is all about investment for growth rather than consolidation for dominance or cost. 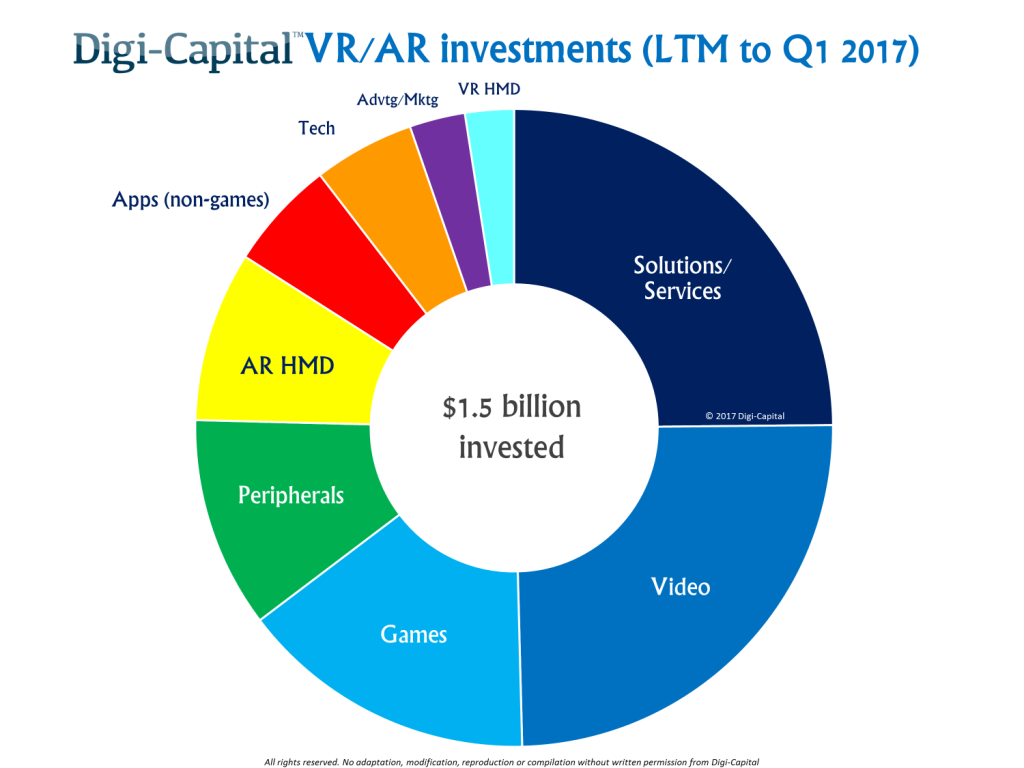 But as the VR/AR market continues to scale, M&A deal flow is on the rise. Major tech players are actively honing their strategies on where and who to buy. Startups are also considering larger corporate parents to provide safe harbor, until the market is big enough for their business models to sing. And as often happens, early stage companies which can’t raise the next round are looking for mergers with better funded startups to leverage their tech and talent. 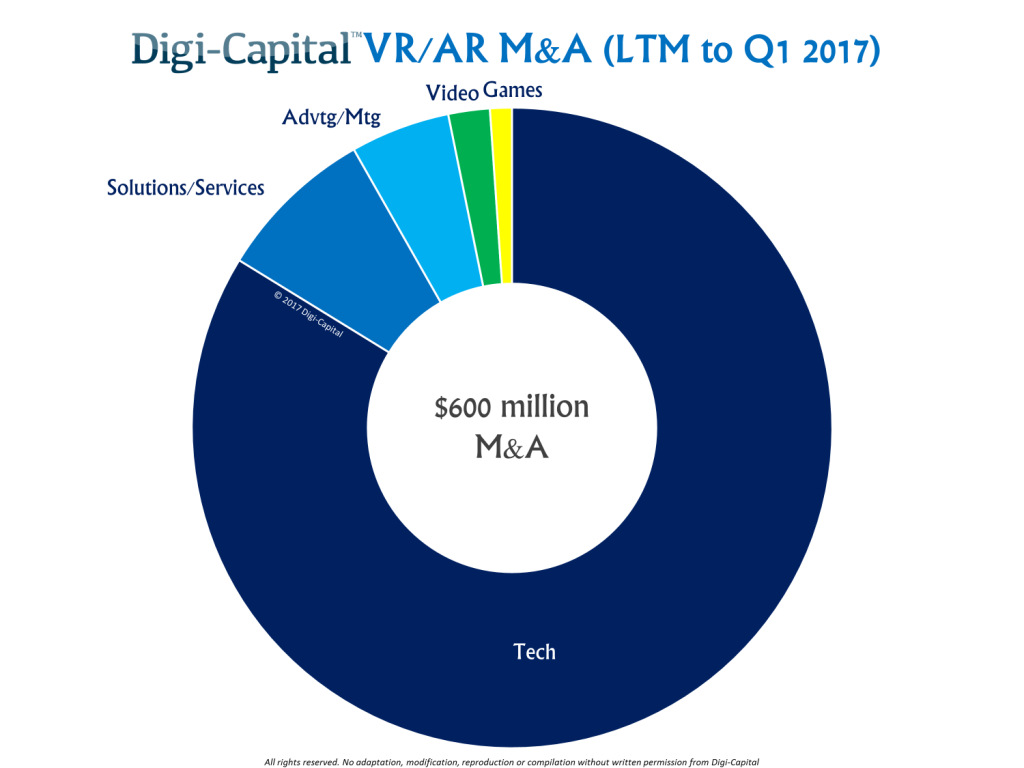 It’s good to be the king

High-end PC VR is compelling, and buying the headset, controllers, PC, graphics card, and premium software to make it fun put it beyond the reach of mass market consumers.  So while there are hundreds of thousands of Oculus and Vive users today, Digi-Capital’s forecasts see console/PC VR’s combined installed base only topping 20 million units by the end of the decade (Note: This is installed base, not annual unit sales, and it excludes higher volume mobile VR). And this is for companies used to operating in markets with users counted in the billions.

Facebook’s enterprise value is close to $400 billion, it paid $3 billion for Oculus, and Mark Zuckerberg might invest $3 billion more on top of that. Facebook could fund Oculus’ PC division indefinitely, and HTC also has a large cash stockpile (although perhaps not quite such a big one) to fund the Vive division. With two T-rex’s and not enough food, something’s got to give at the high end. It’s not clear what deal (if any) might result, but watch this space.

While it’s not surprising to see corporates buying component makers and solution providers to accelerate internal development, for such an early stage market VR/AR’s roster of buyers has been impressive. Microsoft bought ODG’s patents for up to a reported $150 million. Apple bought Metaio. Google, Facebook, Intel and Snapchat each bought multiple component makers and solution providers. For core technology startups around mobile AR and AR smartglasses in particular, the high level of interest from corporate acquirers looks set to deliver more deals this year.

Some VR/AR sectors have become crowded already, with hundreds of startups chasing the same early stage consumers (and their wallets). The two sectors with lowest barriers to entry and the highest number of startups are VR video and VR games. While some of the best funded companies have the resources to see them through, others are already facing the financial realities of this stage of the market. Expect to see consolidation in these sectors in 2017, with a spurt of investment and growth coalescing around mobile AR next yearin the wake of Facebook’s AR Platform launch at F8.

Nobody has come close to an Oculus sized deal in AR, with the largest full-stack AR acquisition being Intel buying Recon for $175 million. AR smartglasses could take a few years to conquer AR’s five consumer challenges (hero device, all day battery life, cellular connectivity, app ecosystem, telco cross-subsidization), with In the meanwhile, mobile AR becoming the dominant form of consumer AR through a combination of Facebook’s AR Platform and (if and when) Apple and Samsung enter the market. Given some folks’ wait-and-see approach to what the Facebook/Oculus deal means, AR’s consumer market might need to become clearer before corporates leap to the first billion dollar AR acquisition.

VR/AR advertising, peripherals, distribution, social, enterprise and location-based VR have the benefit of not being overcrowded, but they also don’t have a catalyst to kick-off M&A in a major way yet. For large scale deal activity here, the total VR/AR installed base needs to scale to where corporates can’t stay on the sidelines any longer, and also need specific skills and tech they can’t develop inhouse.

As VR/AR goes through a hinge year between last year’s launch and the coming inflection point around mobile AR, deal makers are being forced to consider where and when to move. Buy too early and risk being accused of irrational exuberance, buy too late and risk missing the boat. As always with VR/AR, it’s all a question of vision.

All the investments and M&As in VR/AR for the last 5 years are tracked in detail in Digi-Capital’s Augmented/Virtual Reality Report Q1 2017 and bundled deals database.