There are now 17 billion-dollar companies with 60,000 employees and $15 billion in funding in the sharing or collaborative economy, according to Jeremiah Owyang and VB Profiles, a market intelligence firm partly owned by VB. That includes the venerable eBay, founded in the dim mists of technological antiquity, and relative newcomers Etsy, Chegg, WeWork, Airbnb, and — of course — Uber. 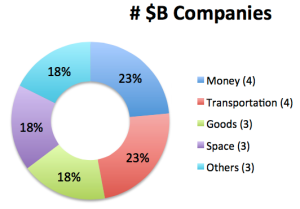 While most of the startups are relatively recent — many became billion-dollar companies in less than four years — they have their roots in tough times, Owyang says.

“Many of these startups birthed from the trough of the 2008 recession,” he told me via email. “The startups received unreported friends and family money, then got market traction with adoption, then were able to seek out traditional investors, resulting in the investment boom a few years later.”

Owyang classifies collaborative economy companies in a honeycomb rubric with 12 core verticals or categories, including transportation (where Uber and Lyft belong), space (where Airbnb sits), and goods (where he’s placed Etsy and eBay). Interestingly, the largest number of billion-dollar companies are in those three spaces, plus a fourth: money, which features LendingClub, FundingCircle, Prosper, and TransferWise. 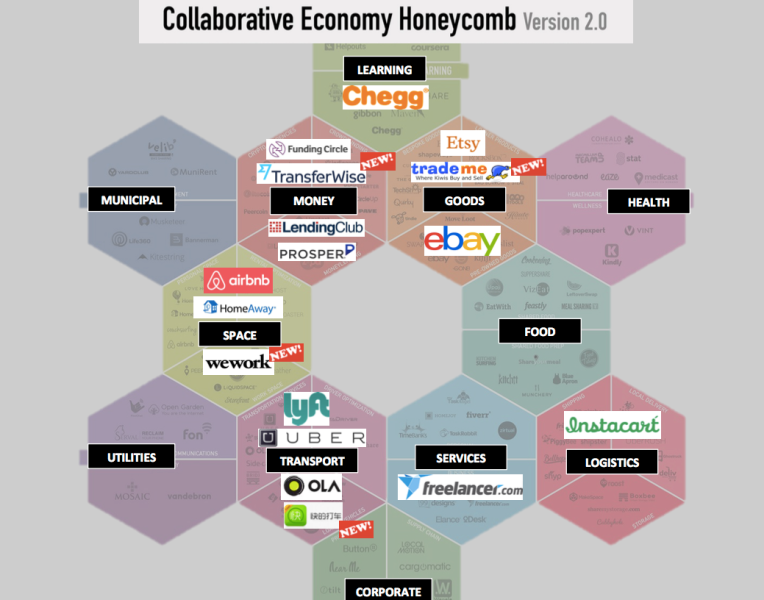 Other spaces, such as utilities, municipal, health, food, and corporate, have yet to see any kind of billion-dollar players.

Interestingly, eight of the 17 are based in California, while 12 of the 17 are U.S.-based. That preponderance may not last, Owyang says.

“While these startups are often based in the SF area, they often serve global national markets,” he says. “Ola is an India-based ride sharing company that is well-funded, and existing Chinese tech companies are building their own versions which means that publicly funded data is unlikely to be surfaced. France’s BlaBlaCar recently received $100 million of funding which they used to purchase a competitor, earning them the title of largest ride sharing company in Europe.”

Perhaps the most unusual thing about the space?

The collaborative or sharing economy has received $15 billion in funding — more than the entire social networking space that has spawned giants like Facebook, Twitter, Snapchat, and more. If that’s any indicator, the collaborative economy is still in its infancy, and many more billion-dollar companies (and unicorns) are coming soon. 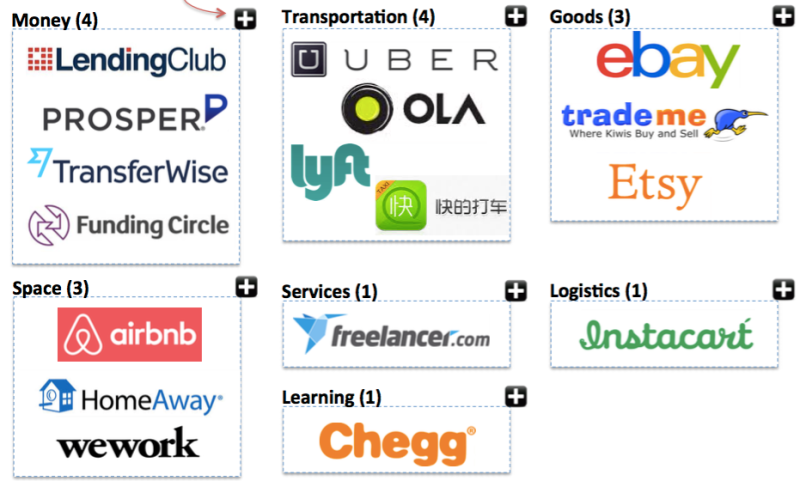 Above: All 17 collaborative economy billion-dollar companies

One thing that these often counter-cultural startups won’t do is totally upend our capitalistic one-percenter economy.

“It’s worth noting that the early hope that this sharing market would foster altruism and a reduction of income inequality can now be refuted,” Owyang says. “The one percent clearly own the sharing startups, which means this is continued capitalism — not idealistic socialism.”

The 10 “unicorns” among the 17 billion-dollar sharing economy companies? Owyang defines those as the companies that are still private.

The full Collaborative Economy ebook is available at VBprofiles.