(Reuters) — When Belarusian President Alexander Lukashenko met entrepreneur Viktor Prokopenya in March 2017, their discussion was scheduled to last for an hour but went on for three times that long.

The meeting, Prokopenya said, ended with Lukashenko asking him to propose regulations to boost the country’s tech sector. Prokopenya worked with IT firms and lawyers to draft guidelines to cash in on an emerging digital industry: cryptocurrencies.

Some two years later, the rules are in place. Investors can trade bitcoin on an exchange run by Prokopenya, while other companies are launching their own cryptocurrency platforms. 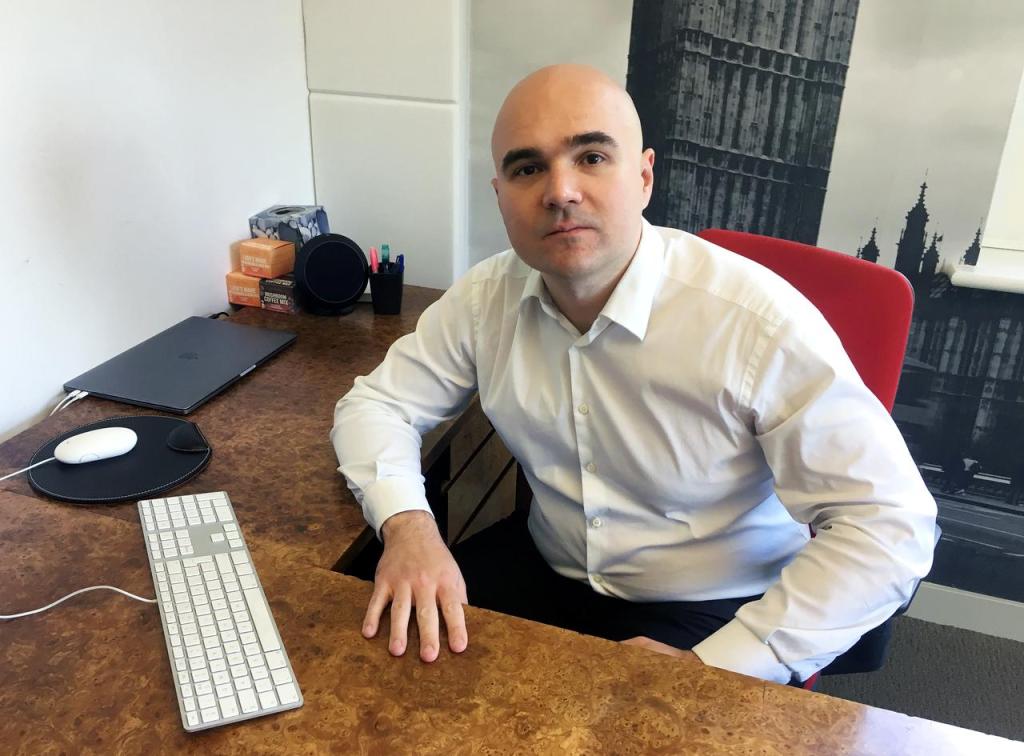 Above: Belarusian IT investor and entrepreneur Viktor Prokopenya is pictured at his office in London, Britain July 15, 2019. Picture taken July 15, 2019.

“The idea was to create everything from scratch,” Prokopenya told Reuters in an interview in London. “To make sure that it is free in some of the aspects it needs to be free, and very stringent in other aspects.”

Belarus is among a handful of smaller countries coming up with specific rule books for digital currencies. Their efforts could help shape the development of the global market and the growth of industry players, from exchange platforms to brokers.

So far, cryptocurrency companies have often had to choose between two extremes when deciding where to set up shop.

Major financial centers like London and New York, which apply traditional financial services rules to the sector, might be attractive to big institutions seeking safety but the compliance complexity and costs preclude many of the startups at the heart of the fledgling industry.

Conversely, lightly-regulated jurisdictions like the Seychelles and Belize allow far easier market access. But states with light rules can offer less protection for investors and have looser checks on money laundering, lawyers say.

The likes of Belarus and other newer entrants — including Bahrain, Malta and Gibraltar — are seeking to offer a third way: crafting specific rules for the cryptocurrency sector, betting they can attract companies by providing regulatory security as well as perks like tax breaks.

While there is no guarantee of success, cryptocurrencies represent a rare chance for these states or territories to grab a slice of an emerging market, potentially attracting investment and creating jobs, at a time when big financial hubs are adopting a more conservative, “wait-and-see” approach.

“There are jurisdictions in the see-no-evil, hear-no-evil camp,” said Jesse Overall, a lawyer at Clifford Chance in New York specializing in crypto regulation. “On the other end there is the U.S., UK, EU. In the middle, that’s the juicy part of the spectrum.”

Overall said both countries and companies could benefit from the emergence of frameworks specifically for cryptocurrencies. But states that get the rules wrong could fall foul of global rules to stamp out illicit use of digital coins, he added.

Indeed, there are major questions over whether these nations will be able to consistently prevent the hacks and illegal activities, such as money laundering, that plague the opaque sector and could hammer their reputations as secure centers.

Another risk of building rules for an unpredictable and rapidly evolving industry is that they could soon become outdated.

‘Carrots with no sticks’

It has decided to base the business in Bahrain’s capital Manama — and the considerations it faced are emblematic of the quandary confronting many players across the industry.

ZPX’s CEO Ramani Ramachandran said it decided against operating in a so-called offshore jurisdiction with low or no regulation. Such a base could deter big investors as scrutiny of digital coins heats up from global regulators and politicians, he said.

“As the market matures analogous to traditional capital markets, mainstream institutional capital will increasingly look to come to regulated exchanges such as Qume as opposed to ‘light-touch’ venues in offshore jurisdictions.”

It’s also usually far cheaper in terms of compliance and administration costs to set up in smaller locations like Bahrain than in major financial hubs, said Ramachandran.

Another advantage of setting up in a smaller country, said ZPX co-founder Aditya Mishra, was the close communication companies could have with regulators, something that would be difficult in a big financial center. Bahrain also offered good access to Gulf markets, he added.

Another cryptocurrency trading platform, iExchange, began operating in the Belarusian capital Minsk this month, aiming to attract investors from the CIS market of Russia and the former Soviet states.

Co-founder Igor Snizhko said Belarus was the best option because it had a regulatory framework that other countries in the region lacked.

Belarus demands audits of issuers of digital coins and details of the projects underpinning any issuance. For trading platforms, the rules include keeping tabs on suspicious transactions to meet international money laundering standards.

“For many the CIS market is very promising and very dangerous at the same time,” he added. “Many large and accomplished players are still afraid of one factor – a lack of transparency. We didn’t want to work in any ‘grey’ jurisdiction.”

Sweeteners offered by Belarus include tax breaks for companies mining or trading cryptocurrencies. The rules, described by PwC as “carrots with no sticks,” also give firms looser rules on currency controls and visas.

iExchange said it had also initially looked at other countries including Estonia and Malta, but chose Belarus because of its proximity to its target market.

The size of the global cryptocurrency sector is hard to gauge because of its complexity and lack of transparency. Still, Ireland-based Research and Markets reckons the sector will grow to $1.4 billion by 2024 from $1 billion this year. Other estimates see a faster rate of growth.

Crypto regulations vary through the world. While Facebook’s unveiling of its Libra coin has prompted signs of a coordinated backlash against cryptocurrencies by major economies, a patchwork of approaches still rules from country to country.

Sui Chung of Crypto Facilities, a London-based cryptocurrency futures exchange, said there were clear benefits to being in a major financial hub, including having access to highly skilled employees.

“You need to be in place where you can get the staff,” he said. “Our product teams, development teams have financial institution experience.”

Being regulated in an established center can also allow companies access to deeper, more liquid markets and provide greater certainty on securities law, said Ann Sofie Cloots, one of the authors of a Cambridge University study on cryptocurrency regulation.

“It may mean you have a more sophisticated investor base, greater access to capital,” she said. “It’s also a reputational thing.”

To be sure, it is not just the likes of Belarus and Bahrain that have coined their own crypto rules: Some larger countries like France and Japan have also made moves in that direction.

But it’s the smaller countries that have tended to launch the most sophisticated “bespoke” approaches, according to the Cambridge University study.

That could bring clarity to both cryptocurrency companies and related services like banks previously wary of the sector’s unclear legal status, said Cloots.

Belarus entrepreneur Prokopenya, whose Instagram posts of sports cars in Cyprus and beaches in Dubai are followed by 5.6 million people, acknowledged the risks that came with blockchain technology, including the potential for money laundering.

But he said these could be mitigated with clear regulation, and that countries like Belarus should not miss out on a chance to grab a slice of an emerging market.

“The biggest risks come from not taking any risks,” he said.