The growing need for tech designers is driving the industry to seek out multi-disciplinary talent and leading to more inclusive hiring practices. Highlighting this trend, John Maeda, former design partner at Kleiner Perkins Caufield & Byers, has published a new report on what companies are looking for.

In the third annual “Design in Tech” report, Maeda found a hunger for qualified designers among small and large tech companies — Amazon, Google, and Facebook have collectively grown their design personnel by 65 percent in the past year, according to a search on LinkedIn. Of startups that he surveyed, Maeda found that the design headcount is also expanding here. Smaller companies who identified design as important planned to add up to two more employees, while so-called unicorns plan on adding at least 10 more designers over the next 12 months.

But who are these designers? Are they limited to certain areas of expertise? Maeda thinks the profession is changing to include hybrid designers, those who are also developers with some skill in programming, whether in JavaScript, PHP, or Ruby on Rails. In a survey of designers, a third stated that they had engineering training. Maeda said that there had previously been a clear line separating the two disciplines, but the roles are becoming more fluid and companies are even beginning to require expertise in multiple disciplines.

Last year, Maeda highlighted several types of design every company needs: Classical, Design Thinking, and Computational Design. Classical design is the education that designers currently receive in school and is used in media like print and physical displays. “It’s art,” he explained, saying that it will be around for centuries and will affect designers’ ability to be creative. 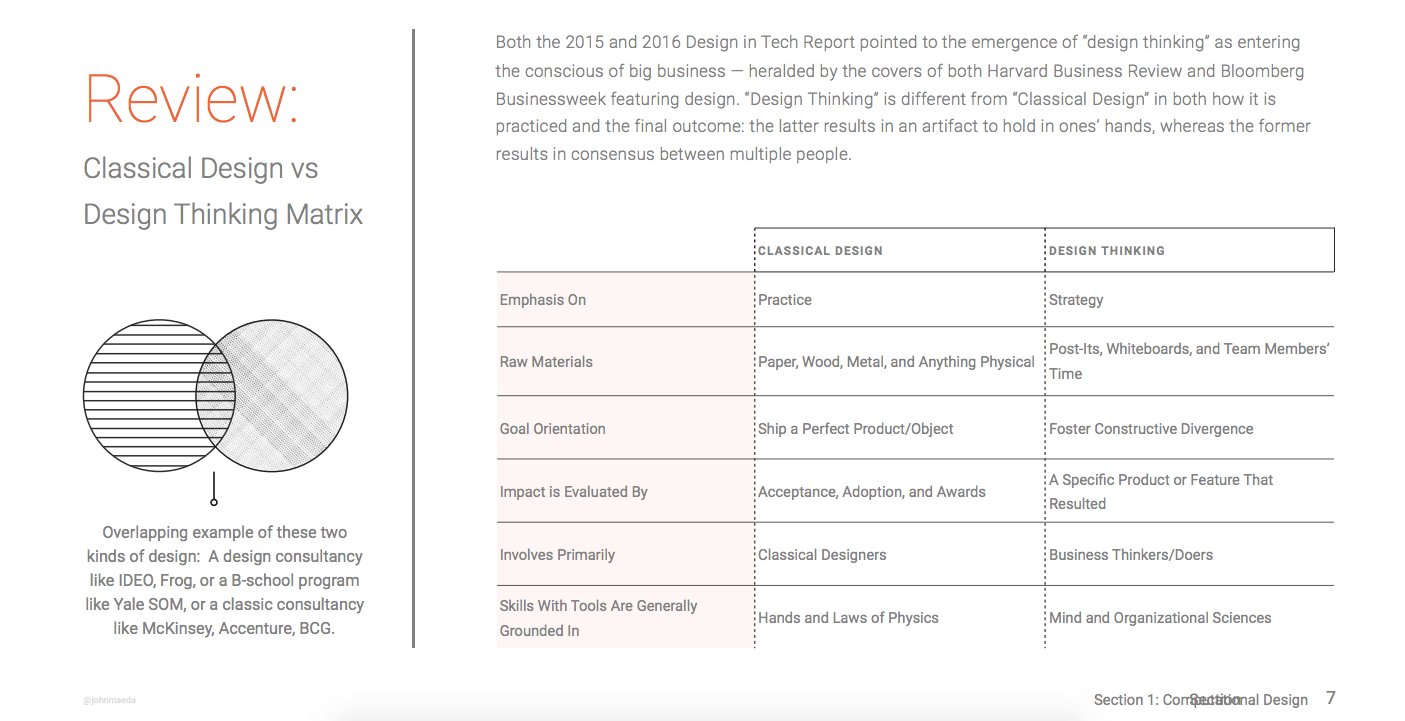 Above: A review of Classical Design versus Computational Design.

Design Thinking is geared toward business-focused design. The last type, Computational Design, is perhaps most attuned to the needs of tech companies, as it involves an understanding of algorithms and processes, which is helpful when creating mobile apps, Internet-connected devices, autonomous vehicles, virtual reality, and other products.

Hybrid designers are able to recognize the complexities that exist within tech products, as well as the design challenges that lie within them. Whether it’s designing solutions for voice-powered services, hardware, mobile apps, or making something more accessible to a variety of people, staying in one’s lane is no longer an option, at least not in tech.

As companies accelerate their hiring of designers, Maeda believes we could also see more inclusive hiring practices, which could lead to more inclusive products and designs. “Creative people tend to be more inclusive,” he said, adding that in a survey he conducted, 90 percent of respondents told him a diverse team is important. 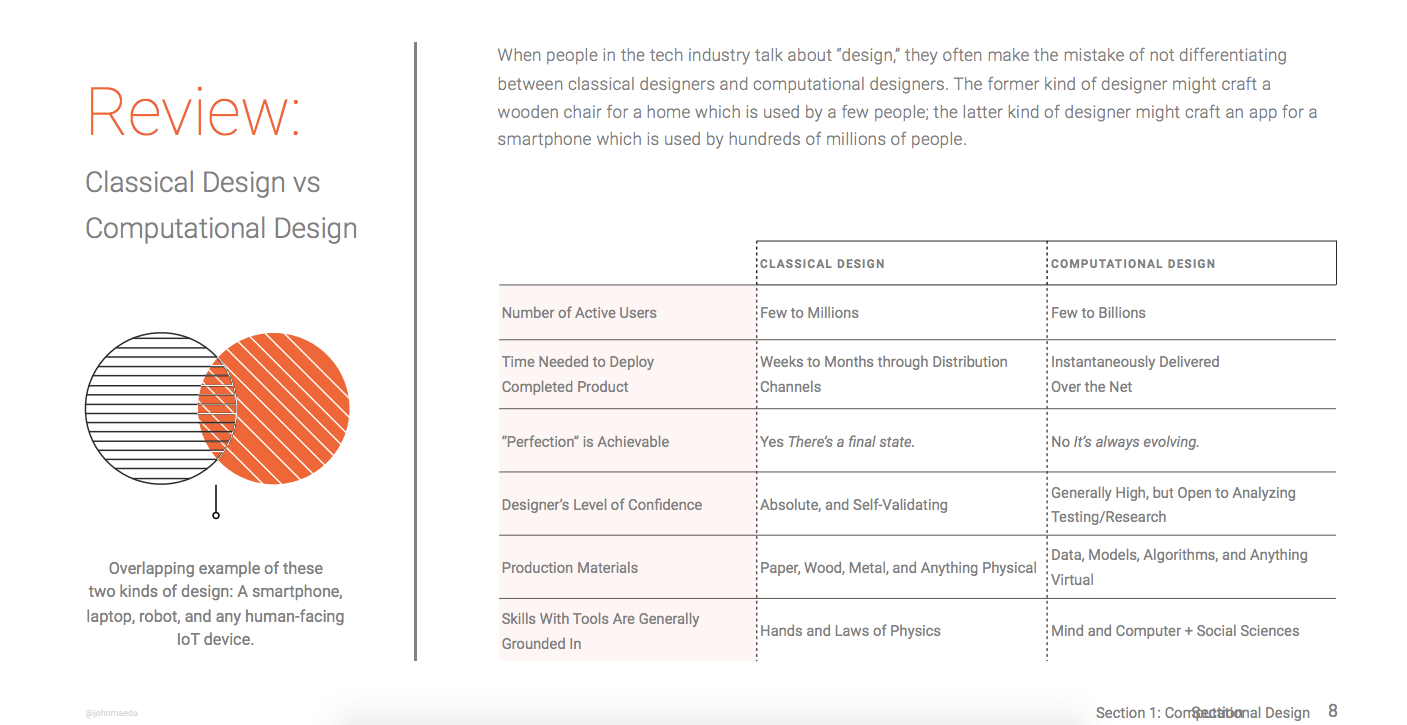 Above: Review of Classical Design versus Computational Design.

“As products and services in our lives become more personalized, there is a growing need for the teams that build to look and feel like the users on the other side. Recruiting and retaining diverse teams is essential for inclusive design — it’s more important than ever before,” Maeda previously wrote.

With social networks becoming more popular than ever before, companies need to have teams that understand design problems as they relate to harassment, image recognition, and enhancing the overall user experience, both in the software and hardware space. One example that was cited was the use of a special grip on Oxo kitchen ware made for those with arthritis, while in another case, a chair was designed to accommodate those living in apartments with limited space.

As tech companies increase their headcount with more designers, it’s important to select ones with an eye for solving problems that customers face, offering a fresh approach to product development.

This year’s “Design in Tech” report looks at other issues, as well, including China’s design progress and its impact on tech in Silicon Valley, the current state of acquisitions in the industry, and other trends.

While previous reports were produced by KPCB, this is the first year since Maeda left the investment firm to join WordPress parent company Automattic.