Venture investment volumes in Russia fell by 9 percent year-on-year (y-o-y) as the number of completed deals increased by 32 percent in Q2 2014, says Rye, Man and Gor Securities (RMG), an independent Moscow-based investment company, in their latest quarterly report published with the participation of East-West Digital News.

2014 continues to be a difficult year for the VC market, as investments maintained their slide compared to 2013 levels. However, Q2 picked up from a weak first quarter, with transaction volume reaching $127 million compared to only $109 million for the first three months of the year. 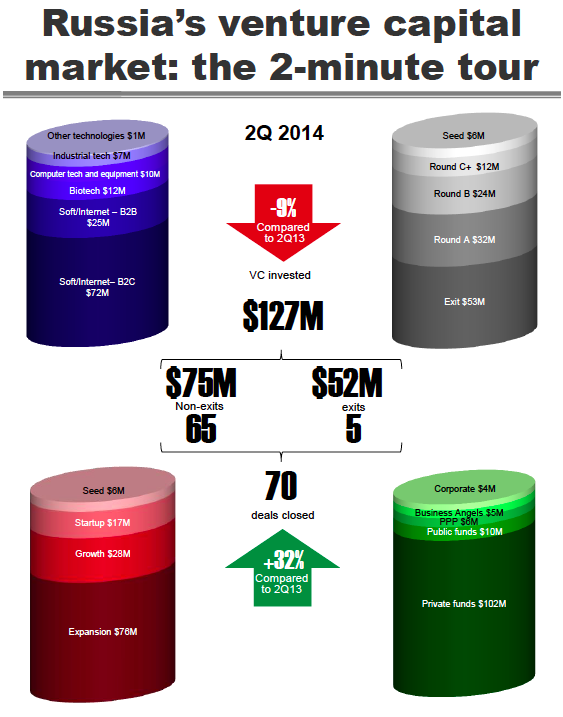 Above: Western investment in Russia is small, and shrinking.

With the state-backed seed-stage Fund for Development of Internet Initiatives (FRII) continuing to represent the dominant share of investments (39 percent), external sources of financing are disappearing for both Russian startups and venture funds due to the present complex international environment.

“Russian venture structures cannot expect to draw capital from Western LPs in the near future: this source of capital has been limited in the past and it will be even more scant now. It will also be harder for Russian funds to enter Western companies, and young teams will find it harder to enter international markets for their products. We would like to believe that the common sense of politicians will win out and the confrontation will not last for long,” says Alexei Solovyev, the Managing Director of Prostor Capital.

Over the past few years, however, several Russian funds, or funds backed at least partially by Russian investors, have repositioned themselves as international rather than Russian funds, opening representative offices abroad and integrating new LPs from other countries. This is typically the case of DST, Almaz Capital, and Runa Capital, to cite a few prominent examples. Such funds are unlikely to cease investment activity globally.

Russian funds, nevertheless, could turn their attention to alternative markets such as Asia and the Middle East, as exemplified by Spinup Partners’ recent initiatives in Singapore.

As for Russian startups, it is true that Western investors are more reluctant than ever to invest in them, but there are notable exceptions, such as Intel Capital which recently invested in Russian startup Webinar.ru and in Russo-Ukrainian software developer Gillbus. Even the EBRD does not fully rule out investing further in Russia, in spite of the statements of several of its shareholders in July.

The Russian VC landscape could be gradually shifting away from a mentality of quick returns to a more mature and constructive philosophy.

“We discussed the situation last week and noted that nearly all the seed funds we knew were selling up or had already left the Russian market. These are previous-era funds, geared to ‘good’, ‘easy’ or ‘fast’ projects (preferably all three at once). What we are seeing now is not a lack of projects or investments, but the failure of certain views and methods. It’s time to shift the emphasis from project hunting to selection and nurture,” says Lyudmila Golubkova, the Managing Partner of Starta Capital.