The Internet Archive has launched an online repository designed to host all public comments made by Donald Trump in recent years, including speeches, debates, interviews, and news broadcasts.

The aptly titled Trump Archive is live now, and the searchable collection of videos already contains more than 700 broadcasts dating back to 2009.

“The project is a work in progress, with improvements planned for expanding collection and making searching more efficient,” explained Nancy Watzman, managing editor at the Internet Archive’s television archive arm. 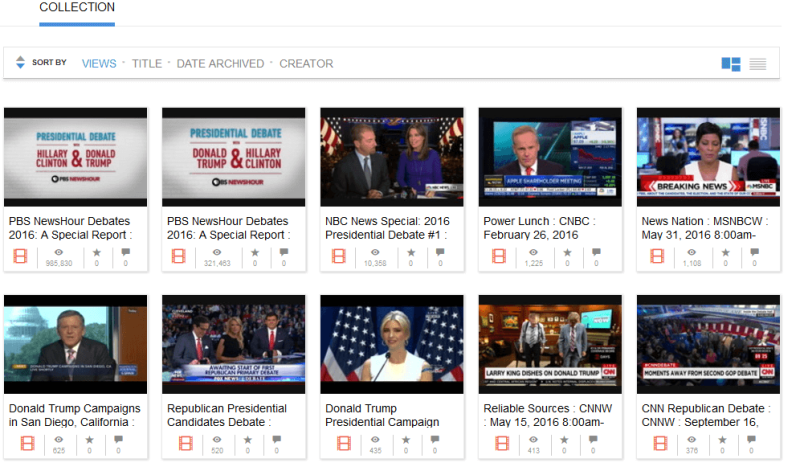 The Internet Archive has been documenting the web’s evolution since 1996, letting anyone revisit the Apple homepage on a specific day in the 1990s or VentureBeat in 2006 — simply by plugging their desired URL into the Wayback Machine.

The Trump-specific archive follows hot on the heels of a number of political initiatives from the San Francisco-based not-for-profit. Last January, it launched the Political TV Ad Archive to help journalists fact-check claims made during political campaigning.

And just as George W. Bush’s time in office was coming to an end in 2008, the End of Term Web Archive was introduced by the Internet Archive in collaboration with the Library of Congress, University of North Texas, George Washington University, Stanford University, and California Digital Library, among others. The goal? To preserve a permanent record of government-related communications during presidential transitions. As Barack Obama prepares to make way for Trump, the Internet Archive revealed last month that it aims to preserve 100 terabytes of government website data.

The outcome of the election has led to concerns about what a Trump administration will mean for technology companies in the U.S., with issues around surveillance and encryption a particular cause for concern. With that in mind, the Internet Archive recently revealed plans to build a replica database in Canada in response to these concerns.

Though the Trump Archive is expected to grow over time, it already hosts more than 520 hours of video related to Trump, including statements relating to immigration, health care, Trump’s tax returns, and Hillary Clinton — all fact-checked by FactCheck.org, PolitiFact, and The Washington Post’s Fact Checker.

The purpose of the archive is to help everyone, from journalists to Joe Public, research things Trump has said in the past and compare it to things he may be saying now. For what it’s worth.

The organization is also looking for help to boost the archive.

“While we’ve largely hand-curated this collection, we hope to collaborate with researchers to apply machine intelligence to expand this collection, building others and making search of our entire TV library vastly more efficient,” added Watzman.