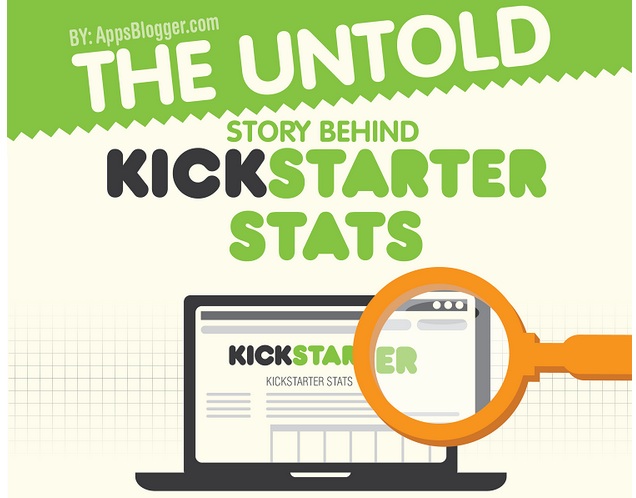 A few weeks ago, I wrote about Kickstarter failures that were difficult to find because Kickstarter intentionally prevents failed campaigns from being indexed by the search engines…and how I managed to find (what turned out to be) about 59% of the unsuccessfully funded projects.

My article generated a lot of attention, including from Mashable and VentureBeat (which republished my post). I’d like to think that it was all this attention that finally led Kickstarter to launch a stats page with data and basic metrics about the projects.

I received much feedback on my article, chief among them from Professor Ethan Mollick of The Wharton School of the University of Pennsylvania. He basically said the analysis I did was wrong. That I “can’t simply compare the percent of projects in a category that are successful without also controlling for the size of the project”. Having never taken a statistics class, I just made some very simple calculations without taking into account things like logistic regressions, variance decomposition, and hazard models. Yikes!

Also, some people objected to my use of the term “failure” on projects that did not get fully funded. Instead, they thought a more useful definition of failure (from a backer’s perspective) would have been to determine whether successful projects actually got delivered.

Give us some real insights!

I heard you loud and clear, so I got in touch with Prof. Mollick. We decided to team up and do some more digging. We wanted to find out exactly what contributes to a project’s success or failure on Kickstarter. We also want to provide real insights that can help you increase your chance of launching a successful campaign on any crowdfunding site.

And don’t think that crowdfunding is a passing fad, either. If anything, with the passage of the JOBS Act earlier this year, crowdfunding will become even more popular; especially for small startups. That’s why the insights we gain from studying Kickstarter, currently the largest crowdfunding platform, can be very useful.

Getting it right this time.

When the Kickstarter stats page went up, we realized that we were missing a lot of the projects. But what’s interesting is that the bulk of the missing data were from failed projects. This further supports the contention that failed projects are being made difficult to find. So, we went back and re-scraped the data from Kickstarter.

With the new scrape, we were able to find a total of 57,860 projects (or approximately 91% of all launched projects). While we were able to easily scrape about 99% of the successfully funded projects, once again, we ran into difficulty when it came to the failed projects. We were only able to scrape 82% of the unsuccessfully funded projects. (Note: My figures are slightly different than the ones in Prof. Mollick’s paper since he’d filtered out some projects for his statistical analysis –see pg. 8 of his paper for more detail. I’ve also included some additional projects found after he’d already completed the analysis.) 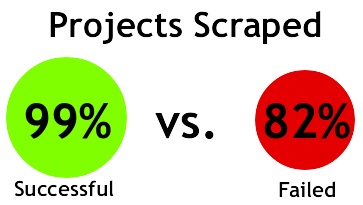 By now, I’ve had three separate developers scrape for these projects. It’s certainly not for lack of effort that the failed projects could not be found. Instead, our developer“believed it likely that Kickstarter may have data issues that inflate the number of failed projects, or else are otherwise hiding these projects.” (See Prof. Mollick’s academic paper, The Dynamics of Crowdfunding: Determinants of Success and Failure.)

Prof. Mollick’s paper “seeks to make a first few steps towards an analytical understanding of crowdfunding” through the data we gathered from Kickstarter, the world’s largest crowdfunding site. I am going to excerpt some of the most interesting stuff here, but you should definitely check out his paper if you want to see how he arrived at these numbers and conclusions.

Failures happen by large amounts, successes by small amounts…unless you are: An Overachiever

Is a shorter campaign duration better?

In my previous infographic, I asked the question: Is a shorter fundraising period better than a longer one? According to the analysis done by Prof. Mollick, the answer is yes, though only slightly.

And yes, size does matter!

Again, I think the key is to set a realistic funding goal; one that will enable you to complete your project. And don’t be greedy hoping you’ll raise much more than you need, because as you increase your funding goal, you decrease your chance of success.

So what are your odds of success?

You can actually predict your odds of success based on the amount you’ve raised so far (%) in the campaign.  Check out your progress against the chart below to find out your odds.

The Power of the FFF (Facebook Friends of Founders) 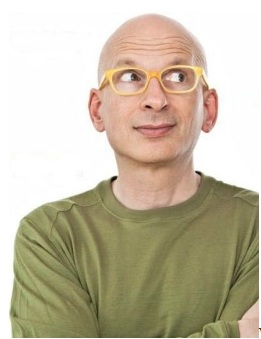 I’m a big fan of Seth Godin, so when he recently launched his own Kickstarter project, I became a Kickstarter backer for the first time. That’s the power of Seth.

He had written a post about why (some) Kickstarter campaigns fail where he stated:

Kickstarter campaigns fail when the tribe of people who believe in the idea is too small.

We now have empirical evidence that Seth was right.

Popularity matters. Just look at Seth’s Kickstarter project. Within three hours of launching his project, Seth already met his goal of $40,000. His project has now been successfully funded for $287,342, over 7x his goal.

So how do we determine popularity? Well, Kickstarter enables you to link your Facebook account to your project. And we determine your popularity by that most powerful of indicators: how many Facebook friends you have. Of course, I say that in jest, but your online social network is a pretty good indicator of your reach.

When Prof. Mollick looked into the data, he found that for every order of magnitude increase in Facebook friends: from 10 to 100 and from 100 to 1,000, the chance of a project succeeding increases hugely.

As Seth said, “Kickstarter is the last step, not the first one.” Kickstarter is not a way for you to attract attention to your project. It is a way to “organize and activate [your] tribe”. But you have to build your tribe first.

Kickstarter is just a platform to present your project. But if you don’t already have a tribe or a way to get the word out to the masses (through media coverage), it will just be hidden amongst the thousands of other projects vying for attention.

Where are the Kickstarters?

No surprises here. The type of projects creators launch reflects the cultural products of their particular city. Music projects are popular in Nashville, film projects in Los Angeles, and technology projects in San Francisco.

What is interesting, though, was the finding that “the higher the proportion of creative individuals in a founder’s city, the higher the chance of success for that founder.”(Check out the map below.) The idea being that if you live in a large community of creative types, the quality of your project tends to be better because of a higher standard set by greater competition. And the better the quality of your product, the better your chance of success.

Yes, they got funded, but did they deliver?

Still waiting on your Kickstarter reward? Don’t worry, you’re not alone. Based on a sampling of projects in the Design and Technology categories:

The major determining factors are people and product. The size of your network and the signals about the quality of your product contribute significantly to whether your project succeeds or not. (See pg. 13 of the paper for more on what Prof. Mollick has identified as “signals of project quality”.)

If you’re so inclined…

Don’t take this as gospel, but based on the findings, for the average $10K project (all else being equal):

Your project will either barely reach its goal, or else fail by a looong way. There’s really no middle ground. Whether your project gets successfully funded is a referendum on the quality of your project, the extent of your social network, and the magnitude of your marketing efforts.

And if you’ve read this far to the end, you’re in for a treat! Because we’re not quite done yet.

Prof. Mollick is working on another huge dataset that will take a closer look at the role of the backers … that’s all I can say for now. It’s top-secret.

If you want to get notified when the new research comes out, just sign up for my private newsletter.

Like this infographic? Get more business startup tips from AppsBlogger.