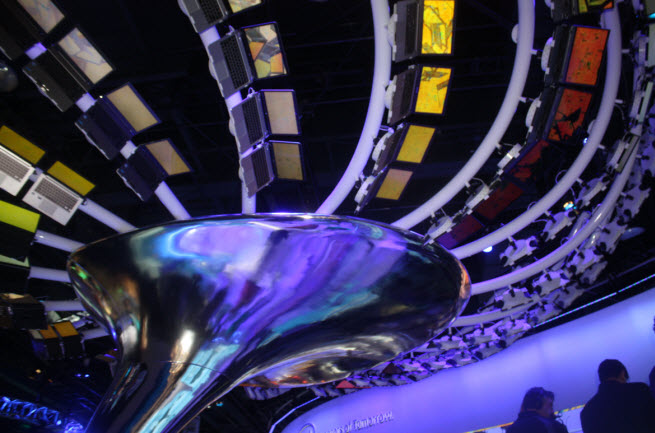 But one thing the show is good for is showing the patterns of the tech world over time. A trend begins at one show, and it becomes stronger at the next. Or it fizzles out. This year, LG said more than 70 percent of its TVs connect to the Internet, compared to about 50 percent last year.

You could say that such patterns make CES a cavalcade of copycats who can’t teach you anything. But part of the definition of innovation is building on what others have done before you. CES can help you figure out what’s cool enough to be worth copying. Google’s Project Glass, for example, isn’t a trend yet because nobody is copying the web-connected eyewear, which debuts next year.

If anything, CES gives you perspective on what is working. More than 3,250 exhibitors showed products across a record 1.92 million square feet of exhibits. Looking at those exhibits gives you a glimpse of the future and what should go on sale in the coming months.

We took a couple of stabs at this last year, for CES 2012, once before the show, and once after. We didn’t do so great with a prediction that ultrabooks would breathe new life into laptops. But the two-screen experience materialized in a big way in 2012 as companies linked smartphones, tablets and smart TVs.

And for an even longer perspective, you can go back two years to read our top trends of CES 2011.

Here’s our list of the top 10 trends of CES 2013. Please vote for your favorite in the poll at the bottom. 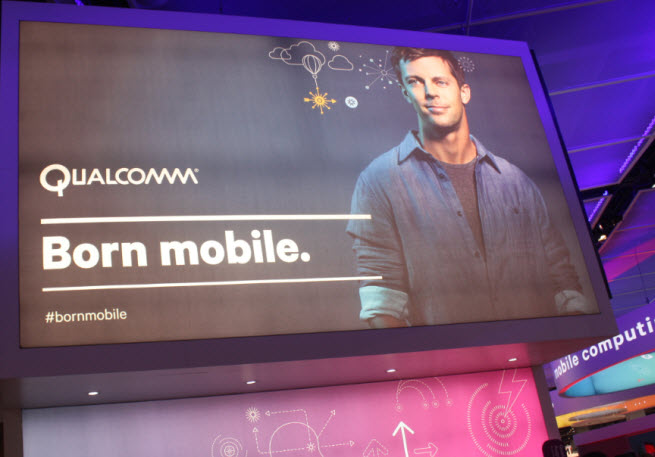 The mobile generation has become the biggest target audience

When Microsoft CEO Steve Ballmer gave up the opening keynote to Qualcomm CEO Paul Jacobs, it was the changing of the guard. Jacobs had a memorable keynote because it was ridiculed so much, but his theme of “born mobile” was genuine enough. A whole generation of kids are growing up untethered from computers and hooked to their mobile phones instead. They are embracing not just one platform but many. As clumsy and laughable as Qualcomm’s keynote was, it got the basic trend right.

After all, Qualcomm has sold more than 11 billion chips for mobile devices over 27 years. And mobile is leading the way. U.S. homes now have 1.4 tablets per household, compared to 1.2 a year ago. We spend 130 minutes a day with smartphones and tablets, compared to 170 minutes a day watching TV. Expect that to flip. In the U.S., about 44 percent of homes have tablets, up from 1 percent in July 2010. Smartphones are in about 55 percent of homes, compared to 36 percent in July 2010. Jacobs said that 84 percent of people worldwide can’t go a day without using a mobile device. We look at our phones 150 times a day.

Shawn Dubravac, a senior analyst at the Consumer Electronics Association, refers to consumers as “digital omnivores.” This generation isn’t picky. It loves anything tech that works and gets the job done. If you target this mobile market, you have a potential audience of billions, several times larger than the PC audience. This year, larger numbers of companies came to the show knowing that. Next year, they’ll call it the Mobile Consumer Electronics Show. — Dean Takahashi 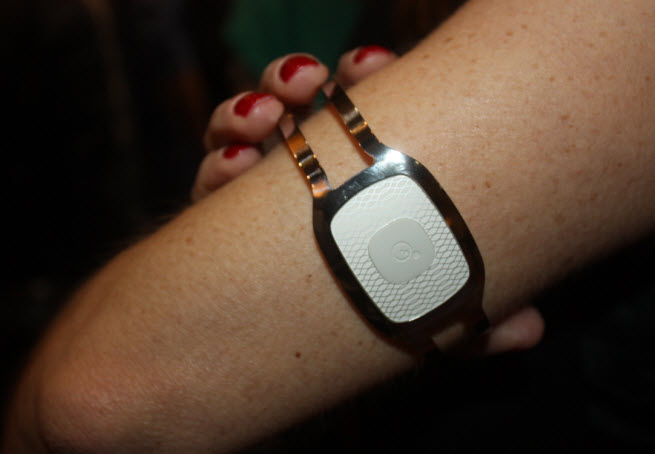 Fitness and health tech get real

In the cavernous South Hall of the Las Vegas Convention Center, three exhibitor regions were clustered together: the Fitness Tech Zone, the Digital Health Zone, and Gaming. Some companies belonged in all three. The show space in Digital Health was up 25 percent from a year ago.

Last year, the realm of fitness counters was the domain of startups. But bigger companies are getting in on the act. The health insurance giant United Healthcare had a “fitness gaming” exhibit where people played Dance Dance Revolution. Clearly, if people are more fit, the health insurance company’s costs go down. Companies with new offerings in fitness gadgets included Fitbit, Withings, BodyMedia, Basis Science, and Hapilabs (maker of the goofy but intriguing Hapi Fork). They were joined by the likes of Bosch, Nike, and others. HealthSpot introduced an interesting Telehealth Kiosk, which takes your vital signs and then allows you to consult with a doctor via remote consultation.

Ariana Huffington, the creator of the Huffington Post, moderated a session with Reed Tuckson of United Healthcare on “The Human Body: The Next Digital Revolution.” That must be a sign that digital health and fitness tech are revving up a hype cycle that could come crashing down. But we’ll bet that the square footage around these trends will be bigger at next year’s show. My own Striiv step-counting app showed I walked about 31 miles at CES across five days. — Dean Takahashi 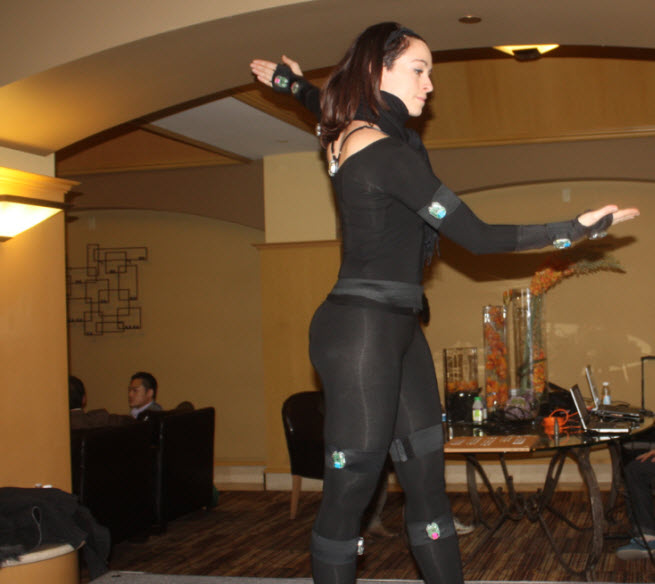 The user interface is you

CEA analyst Shawn Dubravac also predicted before the show that gesture and voice will join touch as new ways to control devices. New technologies based on gestures and voice are coming from the likes of General Motors, Texas Instruments, Intel, and Nuance. Those controls will be useful in cars, and it is no accident that there are more car makers than ever coming to CES, Dubravac said.

At Intel’s press event, Tobii showed off its “eye recognition” technology, where it would detect whether you spotted Waldo in a Where’s Waldo puzzle image. Meanwhile, Samsung included voice recognition in its smart TVs. And PrimeSense, the maker of the depth camera technology used in Microsoft’s Kinect (the motion-sensing system for the Xbox 360), demonstrated further uses of 3D sensing technology, including sensing what objects consumers inspect on grocery store shelves. Movea, in a demo pictured above, showed how sensors on a dancer could be translated into an entertaining digital animation in real time.

Intel calls this trend “perceptual computing,” and it wants to mash-up all of the input technologies into computers to improve things such as device security. Microsoft’s slogan for Kinect, “You are the controller,” is looking better every day. — Dean Takahashi 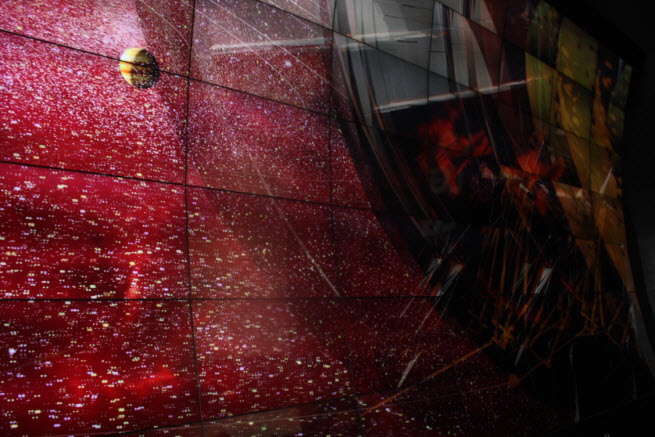 LG had perhaps the prettiest booth with scores of big-screen 3D TVs chained together in a giant screen. And Nvidia had showed off its 3DVision goggles for gaming. But all mention of 3D was curiously absent from the lips of the many executives who touted it in years past. Some companies are still working on glasses-free 3D TVs. But the computing power required to produce a separate image for every viewing angle is a huge obstacle to doing glasses-free 3D right. That computing power is better used producing better images. That’s why 4K Ultra HD TVs were hot this year.

3D was a fad aimed at stopping movie piracy or pumping up the box office receipts. 3D made an appearance as a zombie trend, or something that just won’t die, for a few years. TV makers may include it for free in a last-ditch attempt to keep it alive.  But market penetration of 3D TVs topped out at maybe 20 percent or 30 percent. Judging from CES 2013, that market share is going to drop dramatically this year. — Dean Takahashi