Vayyar is launching a new toy that, at the very least, will become the favorite tool of every home remodeler. The WalabotDIY device gives consumers Superman-like vision, allowing them to see what’s behind a wall. That’s critical if you want to find out where the studs, wires, and pipes are behind drywall or a concrete barrier. It will even show you termite damage or rodent nests.

The WalabotDIY takes the guesswork out of home renovation and repair projects. And it will seem like magic because it lets you to “see” through at least four inches of solid barriers.

The WalabotDIY, and its more expensive Walabot Maker version, could prove the usefulness of Vayyar’s 3D imaging technology, which uses sophisticated algorithms to detect the radio emissions and reflections of different objects. It analyzes the data to figure out in real-time what kind of object is hiding behind a typical wall. You can use it to see through tables as well, but not metal objects and other kinds of barriers. 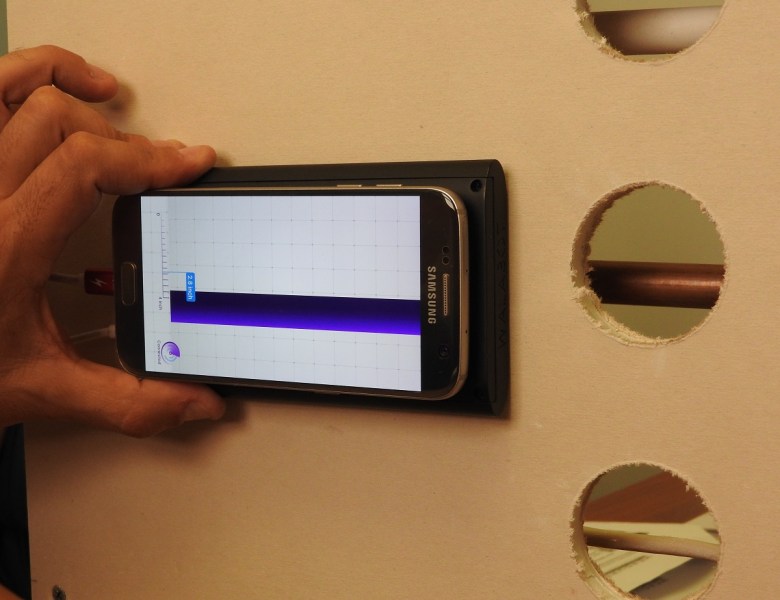 “The idea is to take the guesswork out of remodeling,” said Vayyar CEO Raviv Melamed, in an interview with VentureBeat. “You don’t want someone punching a hole in your sewer pipes by accident. It’s like real Superman vision.”

The WalabotDIY is now on sale in the U.S. for the limited special price of $200 (it will later rise to $300), and the programmable Walabot Maker costs $600. That’s definitely more than a stud finder. But Vayyar’s devices can tell you a lot more about what’s behind a wall. By pairing it with your Android smartphone and activating the app, you can see what’s behind the wall on the screen of the smartphone. It presents the data in raw form or an interpretation of that data as calculated by Vayyar.

There are some delays in showing what is behind a piece of a wall, so you have to move it over the wall slowly. But you can get a 3D image of an entire room’s walls in just a matter of minutes. Melamed said it will make it a lot easier to hang pictures in a gallery, mount shelves, locate a leak in a pipe, or just drill into a wall without the fear of hitting a pipe or electrical wire.

“We can get it to 5 millimeters accuracy,” Melamed said. “You’ll know what’s inside a wall in a few minutes.”

Melamed showed me how the WalabotDIY magnetically snaps on the back of most Android smartphones.

The same technology was originally developed to see through human tissue to detect breast cancer. There are many other potential applications, particularly as mobile devices get more powerful and Vayyar makes advances with its own tech.

But the WalabotDIY is considered ideal for the home renovator, construction worker, and DIY enthusiast. WalabotDIY is compatible with all Android smartphones 5.0 and higher. It is equipped with USB OTG. After the WalabotDIY app is downloaded via Google Play and completes a short calibration process, it can be used to scan the wall. Images of the wall are then projected on the smartphone’s screen.

WalabotDIY also features an adjustable sensitivity setting for optimal calibrations on specific renovation and construction projects. This offers two sensing modes and can easily snap photo screenshots for use in offline analysis. 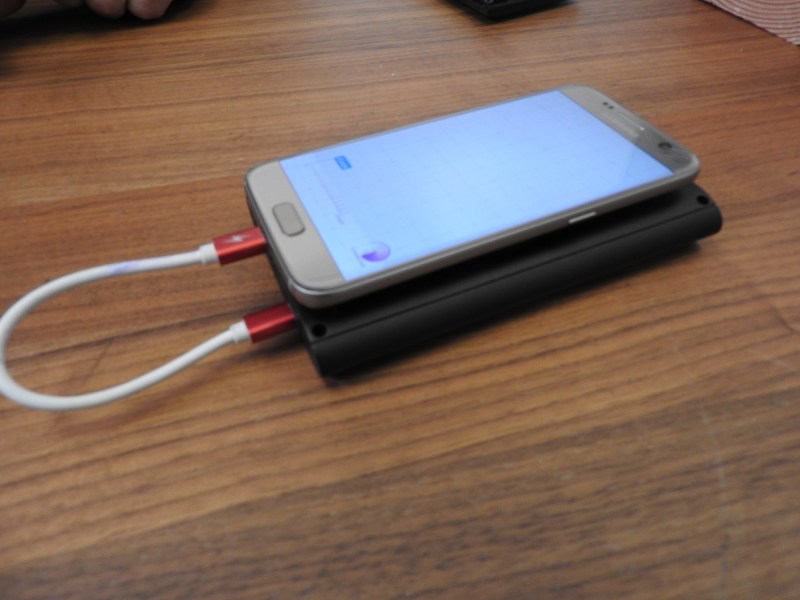 Above: A 5.0 Android smartphone sits atop the WalabotDIY.

Melamed showed me how WalabotDIY can also also detect the pattern of your breathing. That means it has applications for analyzing your sleep patterns and other uses in health, safety, and quality of life. He said the technology is just at its beginning, and it could spur more demand for augmented reality applications.

Vayyar has been selling beta versions until now and will continue to work on refining the quality of the scans. Israel-based Vayyar Imaging is backed by Walden Riverwood, Battery Ventures, Bessemer Venture Partners, Israel Cleantech Ventures (ICV), and Amiti Ventures. The company raised a $22 million round last December. Melamed said the company expects to raise more money soon.

Vayyar has 40 employees. That’s not enough think of every applications, so Vayyar is inviting makers to come up with new applications. The company has made an applications programming interface (API) for the technology available.

“You can do silly stuff and serious stuff with this,” Melamed said.