Each Internet boom creates its batch of pyramid-like schemes. They cater to the lust for easy returns dominant in euphoric times.

That’s not to say they’re fraudulent. Most of these schemes are plausible on their face, and that’s their allure — and what one person believes is sham, another takes as a golden opportunity. This latest boom has given rise to a number of more innovative business models, which so far have skirted around scam, and remain quite intriguing — though still with question-marks hanging over them.

We’ve already mentioned eMax and Agloco — both promising you shares in their still unformed public companies, if you sign up with them to download a toolbar (in Agloco’s case) or submit up your favorite retailers and evangelize for them (in eMax’s case; more on eMax below). And you get rewards if you encourage others to sign up. A host of Web 2.0 companies offer contests, promising iPods and other gizmos, a way to drive up traffic numbers at their sites, usually having microns of difference from a dozen other sites. There are related jobs like Jigsaw, where you can buy and trade business cards for cash points, and which many sales people find quite useful; the list goes on. 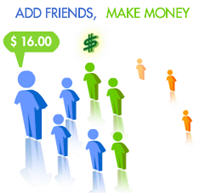 The process goes like this: First, you register your mobile phone number at KushCash’s website and create an account. This lets you download an app to your phone (or you can rely on your phone’s WAP browser). You can transfer funds with a credit or debit card, wire money to any KushCash user you choose, receive payments from fellow users, and transfer accumulated funds to your bank. You can only withdraw money by transferring it to your bank account, and waiting a few days (though KushCash plans to speed it up). Presently, the service targets the 18-34 year old demographic. So far, so good.

KushCash makes money charging for transactions. While sending money is free, receiving it or transferring it to your bank costs $0.50, and KushCash takes 2.8 percent of any money you add to your account. But thanks to its recently unveiled “Spare Change” feature, nickels and pennies start rolling in when you convince friends to sign up. With Spare Change, you get 10 percent of any of your referred friends’ future transaction costs (or 5 cents per transaction, and 0.28 percent of their amount added). If your friends are similarly intrepid in recruiting, you get 5 percent of their friends’ costs, down to the third degree of separation, from which you get percent.

If it sounds like a pyramid model, that’s because it is. But unlike an everyday scam involving some fly-by-night entity that exists only to extract money from the pockets of unwitting fools, KushCash’s pyramid is built to get people to use its core service and give them an incentive to spread the word. This is what eMax and Agloco argue too.

Jeppe Dorff, a KushCash co-founder and its CTO says the company has raised a “substantial” amount in angel funding, but wouldn’t elaborate. KushCash’s user base is in the “high double-digit thousands,” he said. He’s had offers from VCs, but has found them uninteresting, he said. Meanwhile, Kushcash’s closest competitor, Obopay, charges only $0.10 per transaction and has raised over $17M from RedPoint Ventures, Onset Ventures, Richmond Capital, and Qualcomm. Obopay is on a roll, building a stacked management team, acquiring a small competitor, and partnering up with Citi to propel itself into the world of personal finance. (Tap Blog has some good coverage of the two companies here.)

This says nothing of the threat from PayPal, which last year launched an SMS-based mobile payment service of its own, and is about to launch Mobile Checkout, an even smoother mobile payment solution.

Dorff says KushCash has some big announcements in the pipeline.

Finally, we promised to report back on eMax. This is not a prank, which we feared last month when we first wrote about the site. We reached owner Elliot Lee, and he told us a little more about his plans. Like the other site, Agloco, eMax wants to gather users together so that they can boost their purchasing power through group buys. Lee is coy in describing his strategy, because he hasn’t launched yet. The idea, he said, would be if people were to say they liked to shop at say Nordstrom, eMax would barter with Nordstrom on their behalf and get them better deals than if they were shop their alone. Similar to the way Borders gives you 25 percent off if you say, buy $500 worth of books, eMax will get retailers to offer a discount by rounding up 500 customers. Right now, though, before it launches, you can sign up and get three shares in the company. You get an extra share for each person you sign up. Founder Lee doesn’t see this as a pyramid; rather, he sees it as the most efficient way to quickly maximize the number of members. (Lee adds, humbly, that his targeted market this year is $100 billion)

Still, old-timers who have been watching the scams through the years, say they doubt the ability of some of these companies to succeed. They rely on arbitrage, which is risky: Other people enter the market doing something similar, and your advantage dwindles to naught – and you lack substance at the end of the day. There was AllAdvantage, and ClickRebates’ ClickDough, and mValue — all of which died a quick death around 2000. And in the wave before, there was PowerAgent, circa 1994-1998.

These were all viable companies at one time, just as the latest wave of companies may be. From time to time, though, it merits saying caveat emptor.

[Dan Kaplan, a contributing author at VentureBeat, helped with the reporting on KushCash]