NEW YORK — IBM’s Watson supercomputer is on a roll.

More than a month after opening up Watson’s cognitive computing capabilities to researchers, today IBM announced that it’s officially opening up its massive Watson headquarters in Manhattan to serve local startups (among many other uses). Joining the New York HQ are five additional “Watson Client Experience Centers” around the world, which will give international developers a chance to test out the supercomputer.

Watson is also finally making its way to IBM’s public cloud service, Bluemix, which will offer up several new cognitive-enabled services. Additionally, IBM has revealed 10 startups that have integrated Watson and are close to launching, and it’s also announced that there are more than 100 organizations using Watson.

Oh — and Watson is also learning Spanish too, thanks to a partnership with Spain’s CaixaBank. Phew.

And to think, just a year ago the only people tooling around with Watson, outside of high-level Ph.D.s and IBM employees, were Big Blue’s interns. Today, it’s poised to bring about the cognitive computing revolution — a form of computing that’s focused on gaining insights from massive troves of data, rather than the more task-oriented computing model we’ve relied on for decades. 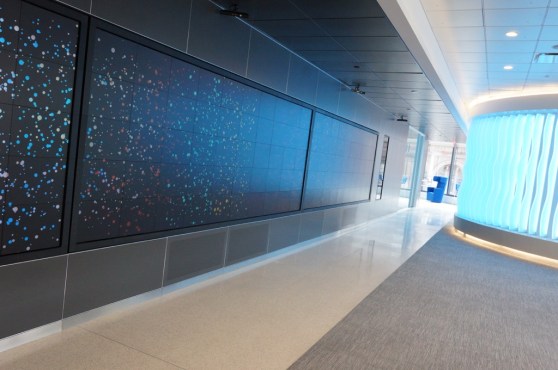 Above: The Watson HQ’s office is filled with giant interactive displays from Oblong Industries (whose founder developed the display interface for “Minority Report”)

Watson’s huge strides over the past year aren’t surprising. IBM formed a group dedicated to Watson earlier this year and backed it with $1 billion in cash. The company also carved out $100 million of that money to fund startups using Watson.

[Check out our in-depth feature on IBM’s billion-dollar investment in Watson here.]

“We wanted to be right in the middle of the East Village and Silicon Alley, because you have this burgeoning entrepreneurial community,” John Gordon, a vice president at IBM’s Watson Group, told VentureBeat. “The types of things we’re doing here are fundamentally different than what we were doing in the dot-com era — it’s going to take having people fundamentally think differently.”

After viewing a few demos of Watson’s technology at the HQ and talking with several startups relying on its technology, it’s hard not to get swept up in IBM’s vision for cognitive computing. Watson will give us apps and services that can dig through huge data archives and give you insightful responses — and best of all it can understand natural language queries through text and voice.

I’ve said this before, but the metaphor is worth repeating: Watson could give something like Apple’s Siri an actual brain. And what’s truly exciting is that we’re basically at the starting point for cognitive computing. Looking at Watson today I can’t help but feel flashbacks to using the Web for the first time in the mid-90s, where its potential for innovation seemed limitless. 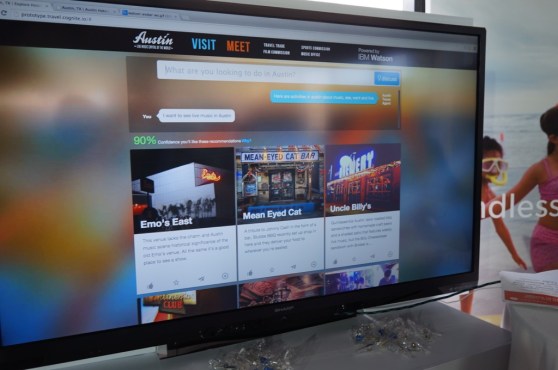 Above: WayBlazer’s prototype site for Austin

Terry Jones, the founder of Travelocity and founding chairman of Kayak, is betting on Watson’s smarts with WayBlazer, his next travel startup. Rather than just finding you a trip, which his last few companies excelled at, WayBlazer is all about telling you what to do once you’ve landed. It uses Watson to look through the web, social networks, and your own preferences to suggest activities — which could make it ideal for steering you away from tourist traps and toward excellent hidden experiences.

Below, you can take a look at how WayBlazer works in Austin, its first client and home city:

Other startups using Watson include LifeLearn, which gives veterinarians a way to quickly diagnose pet treatment; Findability Sciences, which gives non-profit funders a way to make smarter investments; and SparkCognition, which offers network security insights by “thinking” like a security expert.

As for BlueMix, IBM’s cloud platform for app development, its new cognitive services includes user modeling based on linguistic analytics; the ability to understand abstract concepts and colloquialisms; and the ability to answer questions based on several data sources. IBM will offer free API access for developers to test out Watson’s cognitive capabilities, but you’ll have to shell out cash if you want to dive into the really good stuff, like creating an app that can learn over time.

While Watson has mostly “thought” in English up until now, IBM’s partnership with CaixaBank to teach it Spanish marks an important milestone. By truly understanding another language, rather than just translating it from English, Watson will be able to work better for native speakers. That could allow it to understand cultural differences better, which could eventually lead to Watson being used as an incredibly powerful translation service.

“Language is where a lot of insight from people is recorded, and understanding the meaning and richness of all the great insights people have put together from physicians to philosophers is pretty dramatic,” IBM’s Gordon said. “The more Watson can tell natively what was the meaning behind something, and not just words, I think it’s going to bring a broader part of the human experience.”