Updated again: To clarify paid membership vs. free access.
Updated: To clarify confusion about certification process at Thefunded, and to include Ignite’s response.

TheFunded, the controversial Web site designed to let entrepreneurs rate venture capitalists, says it is finally winning over cooperation from many VC firms.

It says some 50 firms, from Draper Fisher Jurvetson, Mohr Davidow Ventures to NEA have submitted key facts about their firms for entrepreneurs to review. These are called “certified profiles.” However, some VCs remain critical, and refuse to play. Also, it’s not clear whether Thefunded’s certified profiles are really “certified.” Take, for example, Steve Payne, from the Ignite Group. He apparently has a certified profile here). Yet, this morning, Thefunded sent out the contents of email it said had received from Payne after he was asked to “update” this certified profile: “Thanks, but no thanks,” he responded. “I’ve already been slammed anonymously in a review, with no ability to respond.”

We previously reported the criticism from Howard Hartenbaum of Draper Richards. Thefunded still does not let VCs respond to comments on their own profiles (it does lets VCs comment on other profiles). Moreover, it doesn’t let VCs comment on the unfunded (entrepreneurs), something Hartenbaum has suggested to make it fairer. Finally, it doesn’t let VCs read the juicy comments that entrepreneurs write and designate as “private,” and which only members can access. VCs aren’t allowed to become members. Membership is free for all CEOs and founders. Entrepreneur “advisors” and “lower level managers” can pay for access.

Here are the things contained in a certified profile:

Estimated Closing Time of a Funding
Fund Position in a Round (Lead, Follow, etc.)
Fund Description
Fund Special Investment Criteria
Detailed Display of the Fund Numerical Reviews
Partner Contacts with their Specialty and Blogs
Reference Deals with the Lead Partner, Highlights, and Terms

Thefunded includes Ignite under its checked and approved certified profiles because Payne’s firm submitted initial information about itself. However, while Thefunded was fact-checking that profile before final approval and publishing, a user wrote a negative comment about Payne on the firm. That’s what made Payne withdraw from the process, according to TheFunded’s founder, who declines to reveal his name. You’ll see that the Ignite profile (screenshot below) carries little public information; it is kept private for paying members. We’ve tried to contact Payne about this, and will update if we hear back. It is odd, though, that Payne contributed a profile without knowing that people would review his firm.

Update II: Payne has since responded. He says he didn’t submit the profile for certification, but that someone else at his firm may have. Moreover, said he liked the concept of what Thefunded is trying to do, but that the implementation “has issues” — something he told Thefunded in his email.

Update III: Some VCs are telling us they feel forced to play along, fearing a hit job if they don’t.

See our disclosure on our last story about how we feel conflicted about this story. 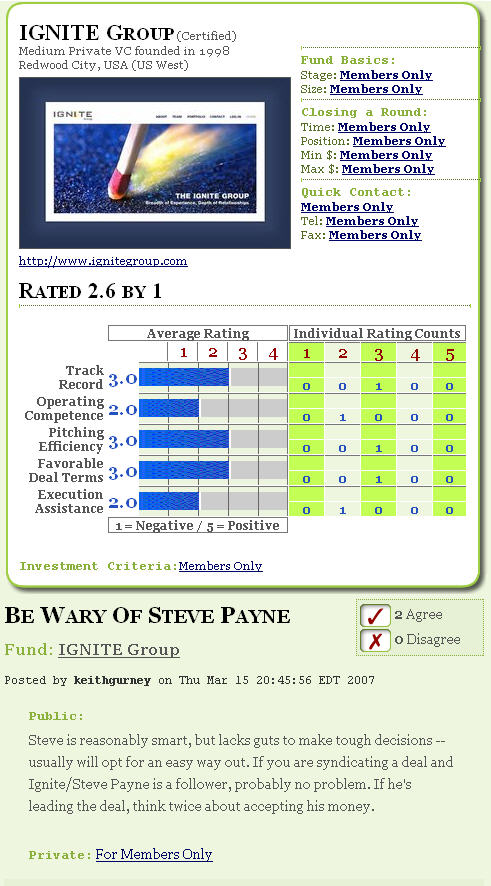