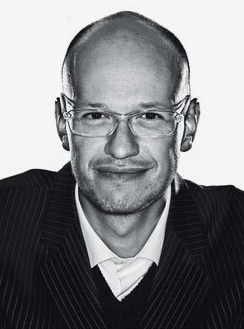 TheFunded, the controversial site where entrepreneurs can anonymously vote and comment on venture capital firms, has itself stayed shrouded in secrecy. Its founder has even kept himself anonymous, going only by the name “Ted” — until now.

Today, he has revealed himself to be Adeo Ressi, a long-time entrepreneur based in New York. Wired has an in-depth interview with him here (they also did a photo shoot with him — where we got this picture).

We’ve covered the evolution of TheFunded from a site “for VC hatchet jobs.” At first, it didn’t let venture capital firms respond to criticism on the site. Now it does, and has even won the respect of some top VCs.

We’ve been experimenting with linking to the site’s profiles on firms when we mention them in posts. It’s a way of giving our readers another perspective on VCs and entrepreneurs.

Ressi has founded and sold three companies. The first was an online city guide called Total New York, which AOL later bought for an undisclosed price and turned into AOL Digital Cities. The second was methodfive, a web development firm he sold to Xceed in 2000 for the bubbly price of $88 million. The third was casual gaming site Game Trust, which he sold to RealNetworks in late September, also for an undisclosed price.

It was issues with Game Trust investors that inspired Ressi to start TheFunded. Here’s an excerpt about the saga from the Wired article:

[Ressi] had closed a first round of funding for Game Trust during the postbubble downturn in 2003, scoring investments from Intel Capital and Silicon Alley Venture Partners. And at first, his Series B round seemed to be proceeding smoothly, with a promise of $10 million from SoftBank Capital.

Then, Ressi says, in February 2005, on the day the deal was supposed to be finalized, his contact at SoftBank called him to say they were pulling out, citing concerns with Game Trust’s management, model, and market. Because Ressi had signed a standard no-shop provision while negotiating with the fund, his company was left with dwindling cash and no other financing options. (A SoftBank spokesperson confirmed that they had a term sheet but declined to provide details, citing a confidentiality agreement.) Game Trust was forced to take another loan from its investors. By fall it had closed a $9 million round that included $3 million from a smaller firm called TWJ Capital, but that relationship soured in late summer 2006, after an unprofitable development project caused Game Trust to miss its quarterly revenue targets. In response, the board voted off one of Game Trust’s directors, Elon Musk — the PayPal cofounder who was once Ressi’s housemate at the University of Pennsylvania — and replaced him with the son of TWJ founder Thomas Jones. With narrow control of the board, Ressi says, Jones launched a bid to take over the company and sack the management team. (Jones declined to comment, citing confidentiality obligations.)

[Disclosure: VentureBeat has a business relationship with TheFunded, including cross-links to each other’s sites]