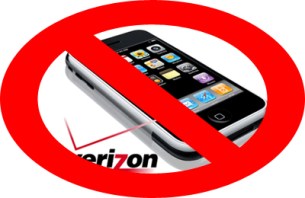 A Verizon Wireless spokesperson said yesterday that the network has no plans to carry the iPhone in the “immediate future.” The statement, made by Verizon’s John Johnson at the D8 conference in Ranch Palos Verdes, Calif., came on the same day Steve Jobs told conference hosts “there might be” an iPhone on a network other than AT&T soon.

According to the New York Times, Jobs was “circumspect,” but he did not deny that Apple may soon offer the iPhone on other networks. And though Johnson implied that Apple will not release a Verizon iPhone right away, he neither confirmed nor denied a relationship between Verizon and Apple at some point in the future.

The questions posed to Jobs and Johnson follow months of speculation about an iPhone on Verizon, the same network that rejected Apple before the first iPhone was released in 2007. In March, the Wall Street Journal reported that Apple may produce a new iPhone for carriers other than AT&T this year, and in May, TechCrunch wrote that design consultancy Landor Associates was working on a Verizon campaign for the iPhone.

Despite the apparent contrast in yesterday’s statements at the D8 conference, both Jobs and Johnson focused on when, not if, Apple would release an iPhone for a new carrier, allowing ongoing rumors about an iPhone on Verizon to persist.