No, they’re not homeless people. At least, not your standard variety. Rather, they’re waiting in line for the rumored new iPhone — five days before it will even be announced.

And, of course, there’s no guarantee it will be available immediately.

“We think the new iPhone will be available on [Sept. 20] … that’s our speculation, since it’s usually out on the Friday after the introduction,” one of the iCampers, Jon Murphy, told me via Skype. “So we think we’ll be out here for about two weeks.” 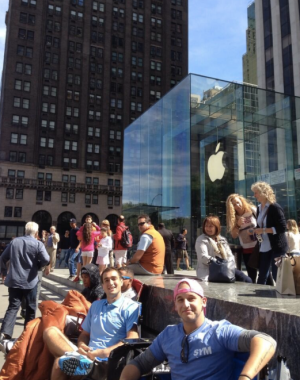 That’s two weeks in Manhattan, outdoors, in September. They don’t have a tent — those are illegal in Manhattan — but they do have wet weather gear, sleeping bags, camping chairs, a solar panel for power, Apple Airport for wireless Internet, and a “dive bag” to put all the electronics inside in case of rain.

And they’re not even first in line.

“I for sure thought we’d be first, no question,” Murphy told me. “But there were two people who arrived last night … they’ve apparently done this for three years.”

Lining up for new Apple product introductions has a long and storied tradition, highlighted by such tech luminaries as Robert Scoble, who famously was first in line for iPhone at his local Apple store. But it’s declined lately as the novelty of shiny new Apple hardware has worn off.

Fortunately for the two of them, rain isn’t in the forecast until next Friday, so they may not get wet for a while. And as for muggers, tweakers, and generally unsavory types found in downtown New York on those long cold nights?

“We’re sleeping on the buddy system for safety.”

So there’s got to be some genius to the insanity, right? A reason for this craziness?

“We’re just promoting our company, SellYourMac,” Murphy told me when I asked him why he was sitting on a camping chair in downtown Manhattan for two weeks.

They may be idiots, but they’re certainly not stupid.