The current state of play with the so-called Internet of Things (IoT) offers a tantalizing glimpse into the future of ubiquitous computing, with web-enabled thermostats, self-driving cars, and even connected kettles creeping into our daily lives. But for all the cool applications we’re starting to see in the real world, there needs to be a force that enables it all.

Launching this week, Barcelona-based TheThings.io is setting itself up to be the back-end platform of choice in the burgeoning IoT industry — an “Amazon Web Services (AWS) for IoT companies,” for want of a better analogy.

Indeed, just as AWS and similar cloud-computing services have enabled startups to scale faster and more affordably than they otherwise could, TheThings.io is hoping to help fledgling IoT companies get to market quickly, with enough power and elasticity under the hood to provide for unprecedented levels of growth. 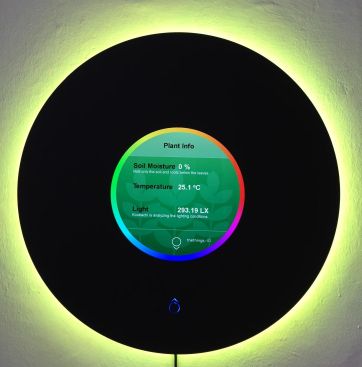 TheThings.io offers a full cloud-based back end for data storage with servers currently based in Europe, though plans are afoot to expand these to the U.S. to minimize lags in transatlantic data transfers. Feeding into this, TheThings.io also serves up analytics, while promising full interoperability.

And it’s this “full interoperability” that’s central to its offering. For example, Google-owned Nest offers a smart thermostat for the home, Koubachi offers plant sensors, and soon-to-launch Ôasys has an interactive tracking system that monitors water usage. With TheThings.io, different devices from different manufacturers will all be able to “talk” to each other.

“Interoperability is the key to the IoT — if the history of communication protocols has proven one thing, it is the difficulty of establishing a global industry standard,” Marc Pous, CEO of TheThings.io, told VentureBeat. “Right now, we need one service that allows IoT devices not only to communicate, but also to collaborate. To truly realize the full potential of the IoT, developers need unified access to all the different languages currently being used. This is why we founded TheThings.iO.”

During the stealth development phase, TheThings.io said it has been working with a number of IoT companies, including Ôasys, with six pilot programs running in parallel and 2,000 developers signed up.

“Creating compelling IoT devices is hard enough without also having to design a back-end platform as well,” explained Blai Carandell, CEO of Ôasys. “This process absorbs a disproportionate amount of resources while making little contribution to the actual success of the device. There is nothing to be gained by developing a new platform for a humidity sensor versus using one already working for a heartbeat monitor.” 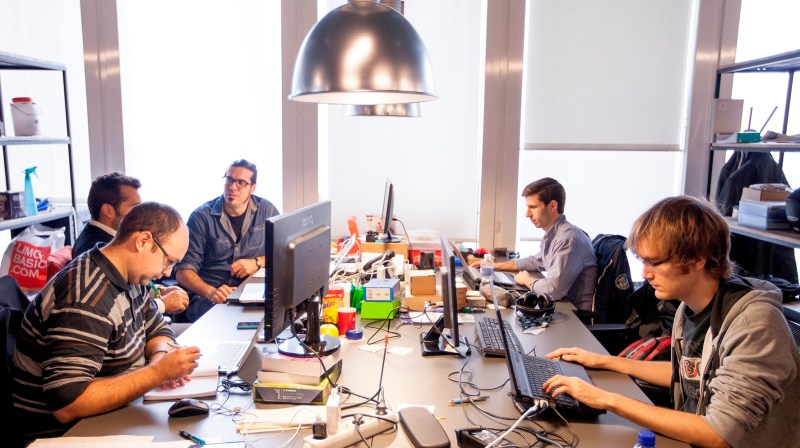 Above: TheThings.iO in their Barcelona office

TheThings.io charges around €1 (roughly $1.15) per device per year. So, for example, if a company ships one million devices that subsequently connect to the Internet, that should cost the company in question one million euros. However, TheThings.io has a tiered pricing structure that brings the cost down once a certain number of devices connect — for 50,000 devices it becomes €0.5 per device/per year, and for 250,000 it will be €0.2 per device/per year. When the magic one million devices milestone is reached, TheThings.io will “customize the cost.”

It’s worth noting here that TheThings.io is chiefly targeting younger startups that are trying to get to market, so it’s probably looking at IoT firms in the hundreds-of-thousands of devices range.

“Companies developing new hardware currently have a lot to do — design, prototype, and manufacture the thing, build the app, and develop the cloud platform to store the data, all from scratch,” said Pous. “TheThings.IO significantly reduces the time and cost of this process, while offering developers and users increased functionality.”

Perhaps the biggest sign that a company is onto something is competition in the space — so Pous & Co. already know about the likes of Xively, SmartThings (now owned by Samsung), and Relayr Cloud. But with 25 billion “things” expected to be “connected” by 2020, there’s more than enough business to go around. If any more evidence was needed that the Internet of Things is where society’s heading, Sigfox just raised France’s biggest ever VC round at $115 million to expand its IoT wireless network to the U.S.

But wait — if TheThings.io is vying to be an AWS for the IoT industry, why wouldn’t a company simply use Amazon’s service itself? After all, AWS does cater for the Internet of Things, and surely a young startup would be more trusting of a major player such as Amazon?

Well, the answer, it seems, is that while Amazon provides the infrastructure, the IoT company still has to build the platform on top of it, including coding analytics and maintaining interoperability across devices. In other words, TheThings.io is built for a very specific, growing niche.

“With us, IoT companies just need to use our APIs to store and query data from the devices,” said Pous. “They can visualize how their customers use their devices that are already in the market. We let them focus totally on what they are good at: building and selling their ‘things’, and not on the underlying cloud platform and database.”

So TheThings.io hopes to differentiate itself enough from the crowd by offering a “hardware agnostic” service that works with any device, while adhering to an architecture “designed for building IoT apps and not just storing data and building analytics on the top,” added Pous.

With six employees based out of its headquarters in Spain, TheThings.io has completed a couple of seed funding rounds to date, amounting to around €70,000 (roughly $80,000), part of which came from Wayra, Telefónica’s startup accelerator. Pous told VentureBeat that they’re currently in the process of raising additional funds from the investor community.