HUNTINGTON BEACH, Calif. — Shubham Banerjee has invented a technology that could make printing Braille much, much cheaper, and he just raised a seed round to make his idea into a commercial reality.

Today, at an annual gathering of its portfolio companies here, Intel Capital announced that it is backing Banerjee’s startup, Braigo Labs, to help it hire engineers, develop prototypes, and begin to test the market. Banerjee took the stage, alongside Intel Capital president Arvind Sodhani, to show off his prototype printer, which is made out of Legos and uses an Intel Edison chip as its CPU. 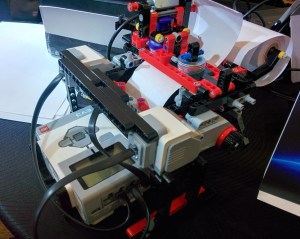 But to attend the event, Banerjee had to take the day off from middle school. That’s because he’s just 13 years old — making him, quite possibly, the youngest recipient of venture capital in Silicon Valley history. (He’s definitely the youngest to receive an investment from Intel Capital.)

“I would like all of us to get together and help the visually impaired, because people have been taking advantage of them for a long time,” Banerjee said. “So I would like that to stop.”

By “taking advantage,” Banerjee is referring to the high price of Braille printers today, usually above $2,000. By contrast, Braigo Labs plans to bring its printer to market for less than $500.

Banerjee has invented a new technology that will facilitate this price cut. Patent applications are still pending, so he wouldn’t divulge any of the details. But the technology could also be used to create a dynamic Braille display — something that shows one line of text at a time by pushing small, physical pixels up and down, and which currently costs $6,500, according to Braigo advisor Henry Wedler, who is blind.

Banerjee also figures that volume production will help keep the price low. Currently, Braille printers cost so much because the demand is low, so current manufacturers need to set a high price in order to recoup their costs.

“The truth is that demand is low in the U.S.,” Banerjee told me. But, he added, if you brought the price low enough there would be huge demand outside the U.S.

Banerjee built the version version of his Lego Braille printer for a science fair. He didn’t know anything about Braille beforehand. In fact, he’d asked his parents how blind people read, he said onstage, and they were too busy to answer. “Go Google it,” he said they told him, so he did.

After learning about Braille, he came up with the idea to make a Braille printer. He showed it at his school’s science fair, then later entered it into the Synopsys Science & Technology Championship, where he won first prize, which included a big trophy and a $500 check.

After that, he started getting a lot of attention on his Facebook page. People kept asking him if they could buy one, he said, which led to the idea of creating a company.

Lego was just for the first prototype, by the way: Future versions will be made with more traditional materials.

So how did Intel come to invest in such a young inventor? His father, Niloy, works for Intel — but that’s not exactly how it happened, according to Niloy.

After working with the beta version of Intel Edison (the chip company’s tiny embeddable microprocessor) at a summer camp, Banerjee’s project came to the attention of Intel, which invited him to show off his printer at the Intel Developer Forum. After appearing at IDF, Intel Capital came calling. 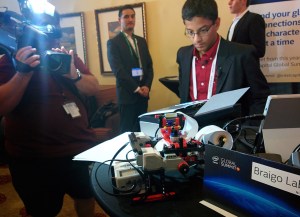 Because Shubham is so young, his parents are playing significant roles in the company: Niloy Banerjee, his father, is on the board of directors, and Malini Banerjee, Shubham’s mother, is the chief executive.

“I’ve already put $35,000 of my own money into this,” Niloy says. With so much skin in the game, he said, it’s become one of the family expenses that he watches very carefully. So they have no plans to open fancy offices or spend lavishly, other than by hiring engineers, he said.

Meanwhile, Shubham will stay in school and work on the company after school hours. His classmates think it’s cool that he gets to do things like visit southern California on a school day to help launch his company, he said. (Though, knowing middle schoolers, I suspect there’s some envy lurking in the crowd somewhere.)

Young Banerjee seems composed in front of crowds, which should serve him well. (That’s not surprising, given that Braigo’s website touts coverage on everything from BoingBoing and SlashGear to CNN and NPR.) When asked onstage, in front of 1,000 entrepreneurs, investors, and Intel employees, how he knew that the printer worked even though he doesn’t read Braille, Banerjee answered immediately, “I Googled it.” The crowd laughed.

“I’m happy that I live in Silicon Valley,” Banerjee said. “So many smart people.”