A PR rep who is among the first Google Explorers has created a 3D-printed shade for Google Glass that makes it easier to read — and much less obvious to observers.

Without the shade, Glass was difficult to read outdoors.

“I realized pretty quickly that the Glass prism projects transparent graphics, which are heavily and easily diluted against sunlight,” Chris Barrett of PRServe says. “Outdoors, I found myself frequently using my thumb to cover the back of the prism, to provide the necessary contrast I needed to see Glass clearly. Indoors, I caught myself turning away from windows and staring at walls, just to see what I was doing.”

(Touching the prism might be one reason why Google Glass is breaking down so frequently.) 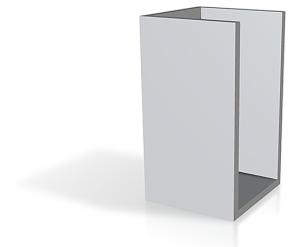 Above: The 3D model for SunShade

To fix the problem, Barrett told me via e-mail, he designed a tiny cover for the prism part of Google Glass where messages actually show up in your visual field. He worked with a 3D printing studio in Philadelphia to develop and print a prototype, which he’s been using since September, and today he’s releasing the code for “Sunshade 1.0” so anyone can print their own shade for Google Glass, almost for free.

Yes, physical objects can now be expressed in code, in an STL, Collada, or X3D file, and in case you’re wondering what it looks like, it’s not nearly as exciting as it sounds. 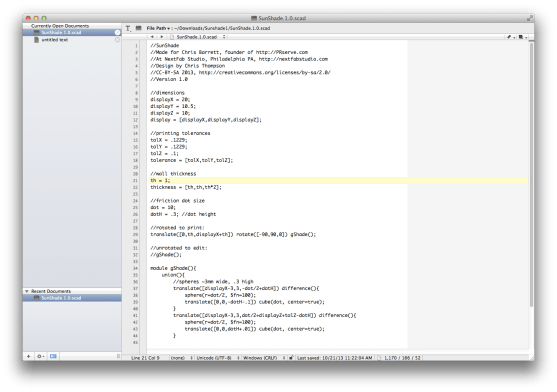 Not only does SunShade allow Google Glass to function properly in full sun, it also has another side-benefit, especially for those who don’t have a lot of time to answer questions from curious strangers.

“Sunshade allows me to use Google Glass … in public without people knowing I’m using Glass,” Barrett says. “When I first received Glass … people would notice the prism’s light and frequently stop me to ask questions. Sometimes it’s fun to chat with strangers, but [many] other times it’s not. Sunshade conceals Glass’ light, so now, when I’m wearing Glass in public, I attract a lot less attention.”

That’s a double benefit: Your boss won’t notice you’re checking email while he’s pontificating about the government shutdown, and your significant other won’t suspect your are secretly surfing Google+ notifications while you’re supposed to be deeply engrossed in a conversation “about our relationship.”

Barrett has open-sourced the code for SunShade, and currently it can be printed at ShapeWays for a ridiculously cheap $2.54.

“I believe that, when Google Glass is finally released to the public, Sunshades will be as popular as Ray-Bans,” Barrett says.