A new skill for Amazon Alexa-enabled devices gives you access to the Atlassian-owned HipChat platform, a first for the enterprise team chat app.

The enterprise team chat app space has been pretty active in the past month.

The announcement comes a day before Microsoft is widely expected to release its Skype Teams messaging app. Slack has also been busy in recent weeks, making moves to integrate with Microsoft Bot Framework and IBM Watson artificial intelligence services.

The Amazon Alexa skill created by SoftServe is named VoiceMyBot and can connect to a specific HipChat room, build and deploy source code, and play recent messages from a boss or colleague.

Add-ons from the Atlassian Marketplace can be made that allow VoiceMyBot to interact with Twitter, GitHub, Trello, Asana, or several others. Since VoiceMyBot code is open-source, custom integrations and other versions of VoiceMyBot can also be made. 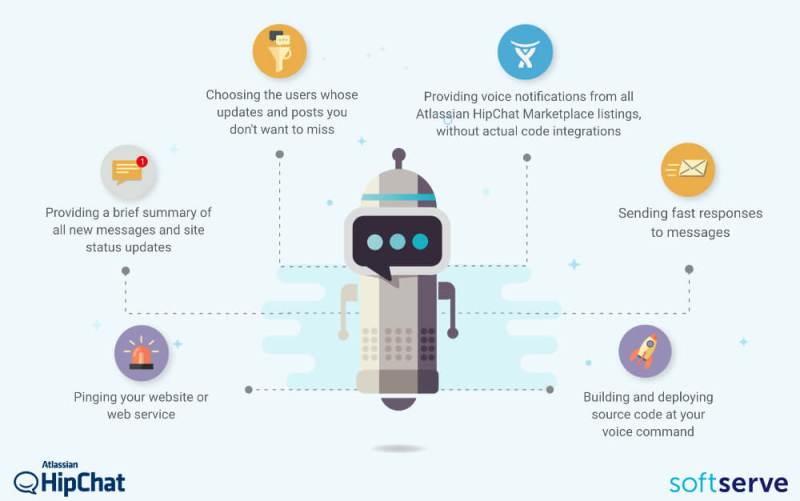 Above: A breakdown of VoiceMyBot functionality

Settings can be configured so that Alexa speaks up each time a certain number of customer service tickets go unresolved or the site is down, or it can join in conversations around the office or at meetings.

“I can set thresholds and alerts and say ‘If this metric is outside of the boundaries or the site is down and [there are] customer issues…” [so] it will actually automate into your team via voice in a way that’s kind of new and interesting and may help certain use cases for different teams,” HipChat general manager Steve Goldsmith told VentureBeat in a phone interview.

Amazon Echo and similar devices have almost exclusively been marketed as a consumer tool for use around the house, Goldsmith said. People are accustomed to receiving information from screens, but having voice assistants in an office setting is a new area that HipChat plans to explore.

“We’re trying to see if there are ways we can experiment now that this palette has been expanded to include voice, to see how a team would interact with augmented conversations, augmented verbal conversations,” Goldsmith said.

The creation of an Alexa skill to interact with HipChat rooms is one of several additions made to HipChat in the past year.

Group video chat was added to the platform in August. Last November, a month before the launch of the Howdy toolkit to make Slack bots, HipChat opened its chat platform to developers and launched its Connect API to allow more app integrations so users can do more without the need to leave the chat app.