A new bot released today in the Slack App Directory lets you teach, test, and quickly deploy chatbots on Slack as well as on Facebook Messenger, Kik, and other platforms.

ProtoBot was made by Amir Shevat, director of developer relations at Slack.

Shevat gave developers a demo at MobileBeat 2016, a gathering of hundreds of companies and thought leaders in the artificial intelligence and chatbot space. MobileBeat is being held July 12-13 at The Village in San Francisco.

ProtoBot isn’t just about testing bots on Slack. It’s about the entire bot ecosystem — bot makers and chat app platforms — working together to create best practices and collaboration, Shevat said. Bringing the community together may help chatbot makers and platforms mature and grow.

“My vision here is you will be able to build bots the same way on any platform and create standards for bot builders and platforms to integrate well,” he said. “I want all the players in the same business to create best practices.”

ProtoBot is designed to be a quick learner. Simple script shared inside Slack lets you create, teach, or test a bot. Use /learn and you can teach the bot to speak a certain way or quickly make tasks that allow employees to complete expense reports. Type “export yourself” and ProtoBot will generate JSON script that can be used on chat app platforms other than Slack. 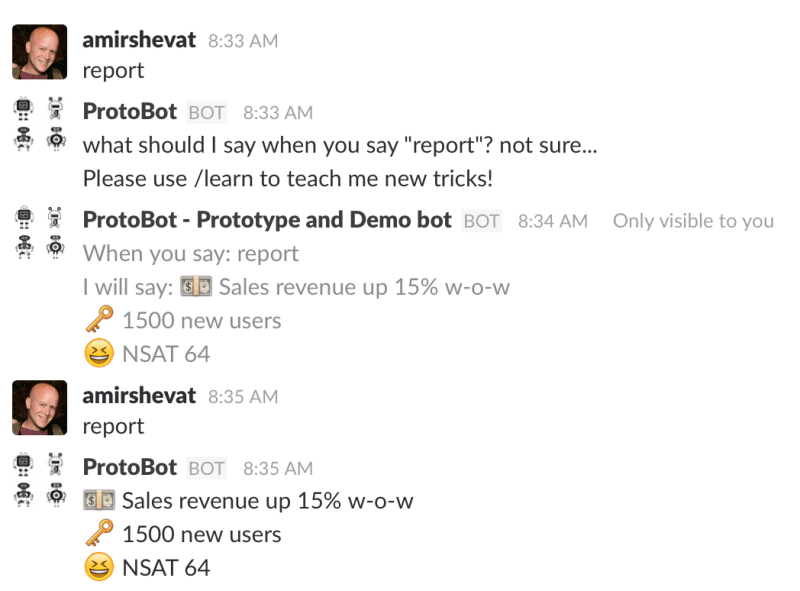 ProtoBot was originally named Dr. Jekyll and Mr. Hyde because it can be invited into multiple Slack channels. Inside channels, ProtoBot can be used by different teams to build prototypes with unique script, a unique logo, and a distinct personality.

Additional features like natural language understanding or automatically created variables may be added soon, he said.

“ProtoBot is one of the first steps in tools that can serve the bot industry to more easily script  and prototype bots. Plus, those bot scripts can reside on multiple platforms, promoting standardization and best practices,” he said.

Shevat said he plans to work with Ben Brown at Howdy.ai to make protobot part of botkit, the open source chatbot building kit made by Slack and Howdy. Last December, Howdy was one of the first recipients of money from the $80 million Slack developer fund.