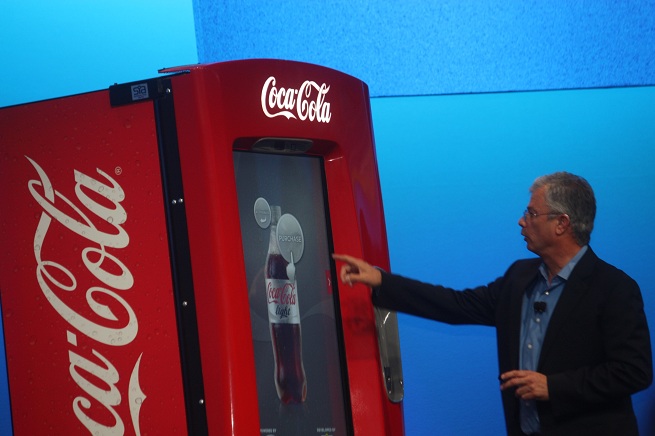 SAN FRANCISCO — I have seen the future of Coca-Cola, and it has Intel inside.

Intel today showed off a futuristic Coca-Cola vending machine that has a fancy PC-like microprocessor inside. The vending machine has an Intel Core i7 microprocessor — the kind that appears in high-end computers — to run its various functions like dispensing a bottle of Coke, playing videos on a large touchscreen, and even taking a picture of the person buying the drink (presumably with permission). Intel executive vice president Dadi Perlmutter showed off the machine at his keynote speech at the Intel Developer Forum in San Francisco. 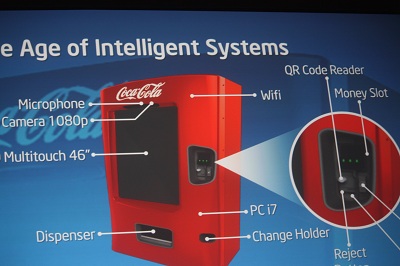 Perlmutter said the 46-inch video screen has full 1080p high-definition playback and a microphone. It has a Wi-Fi wireless network, a QR Code reader, and an old-fashioned money slot and dispenser. In case you want to watch a movie on the Coke machine, it’s entirely possible.

Perlmutter said that the machine can use its technology to collect demographic information about who is buying Coke bottles in various locations.

The machine is already in use in markets such as South America, Perlmutter said. I don’t suppose this is Intel’s secret weapon against Apple’s iPad.

It’s amusing, if nothing else. One wag on Twitter joked, “FINALLY! I’m tired of NOT watching movies while I wait the unbearably boring 2 seconds for my coke to dispense.”